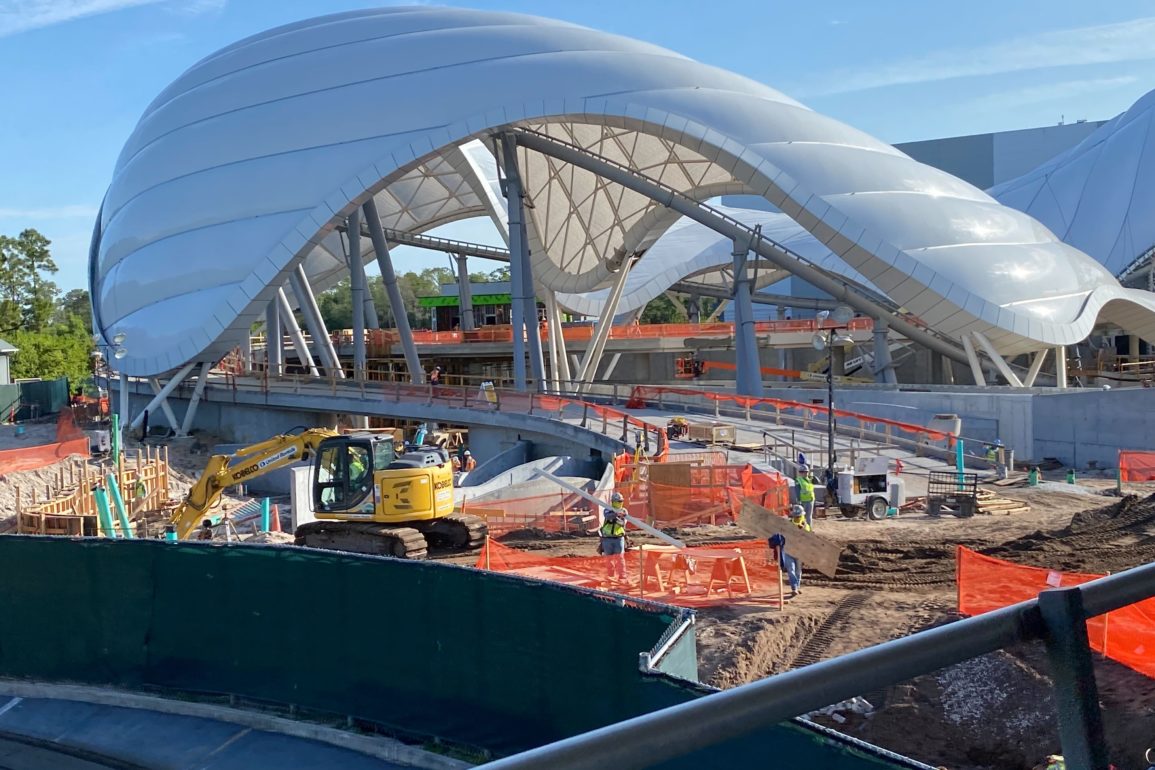 The next big coaster coming to Magic Kingdom is TRON Lightcycle / Run, a near copy of TRON Lightcycle Power Run at Shanghai Disneyland. Here’s our most recent construction update.

At the front of the site, just beyond the Tomorrowland Speedway, many crew members were working on constructing a wood wall.

The base and short wood walls curve around the edge of the construction site.

A digger is nearby, apparently used to dig the trench in which the crew members were working.

This is all for the walkway underneath the attraction’s entrance.

This second walkway may connect Storybook Circus to Tomorrowland or act as an exit for the attraction.

The main walkway is already paved.

There are a few curved concrete walls up.

Crew members were carrying large wooden flats to the edge of the construction site.

A construction vehicle sits atop a dirt hill between TRON Lightcycle / Run and the Tomorrowland Transit Authority PeopleMover track.

The Walt Disney World Railroad tunnel is mostly cleared of materials, although metal supports are still visible further down the tunnel, under the walkway.

A curved ceiling has not yet been installed on this side of the tunnel.

The final strips of the white canopy are being installed near the entrance to the show building.

We saw several crew members atop the canopy framework this morning, adjusting the newest piece.

A black tarp hangs from the edge of the canopy framework down to the walkway.

We could also see the crew members from Storybook Circus on the other side of the construction site.

Meanwhile, crew members in a cherry picker were working on the edge of the canopy.

Once completed, the canopy edge will be covered by white paneling.

The paneling had grey sheathing on it when first installed. Some of the sheathing has begun to peel off these panels.

The crew members in the cherry picker were installing more paneling.

Green sheathing remains exposed on the nearby lockers building.

There is no announced opening date for TRON Lightcycle / Run at Magic Kingdom.