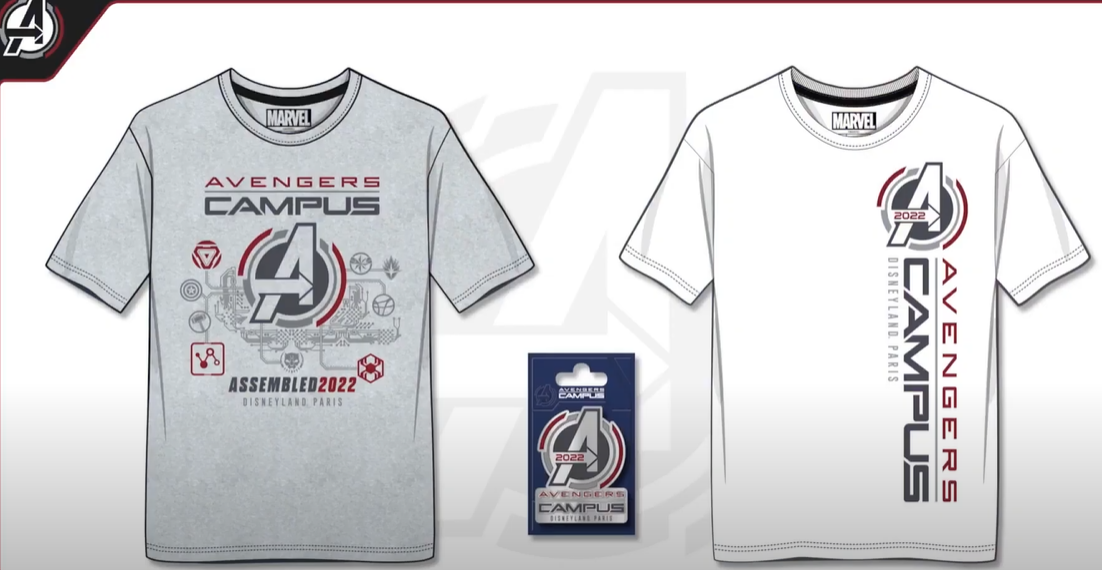 Disneyland Paris has revealed some of the merchandise that will be available for Avengers Campus before the land’s opening day on July 20, 2022 and some that will debut later on.

There will be two preview T-shirts. One appears to be heather grey, with the Avengers logo at the center, “Avengers Campus” along the top, and “Assembled 2022 Disneyland Paris” along the bottom. It also features Iron Man, Pym Tech, and W.E.B. logos in red. These will be available on Saturday, May 28, at Legends of Hollywood and Disney’s Hotel New York – The Art of Marvel.

The white tee is simpler, with “2022” printed in the Avengers logo. “Avengers Campus” and “Disneyland Paris” are printed sideways beneath the logo.

A silver and red pin of the Avengers logo will also be available. The pin also has “2022” within the logo, and “Avengers Campus” and “Disneyland Paris” below. The pin will be released later on.

The other phone case is blue, with Spider-Man swinging across it. A few subtle W.E.B. spider shapes are in the background.

Avengers Campus-branded cardboard frames will be available for ride photos. There is both a vertical and horizontal version of the frame design. The frames are black and covered with various Marvel logos. The Avengers logo is the largest, in a top corner. Other logos include those for Thor, Captain America, Iron Man, Doctor Strange, Ant-Man, The Hulk, Black Panther, Guardians of the Galaxy, Hawkeye, and Black Widow.

Check out more merchandise that will be available at Avengers Campus in Disneyland Paris.