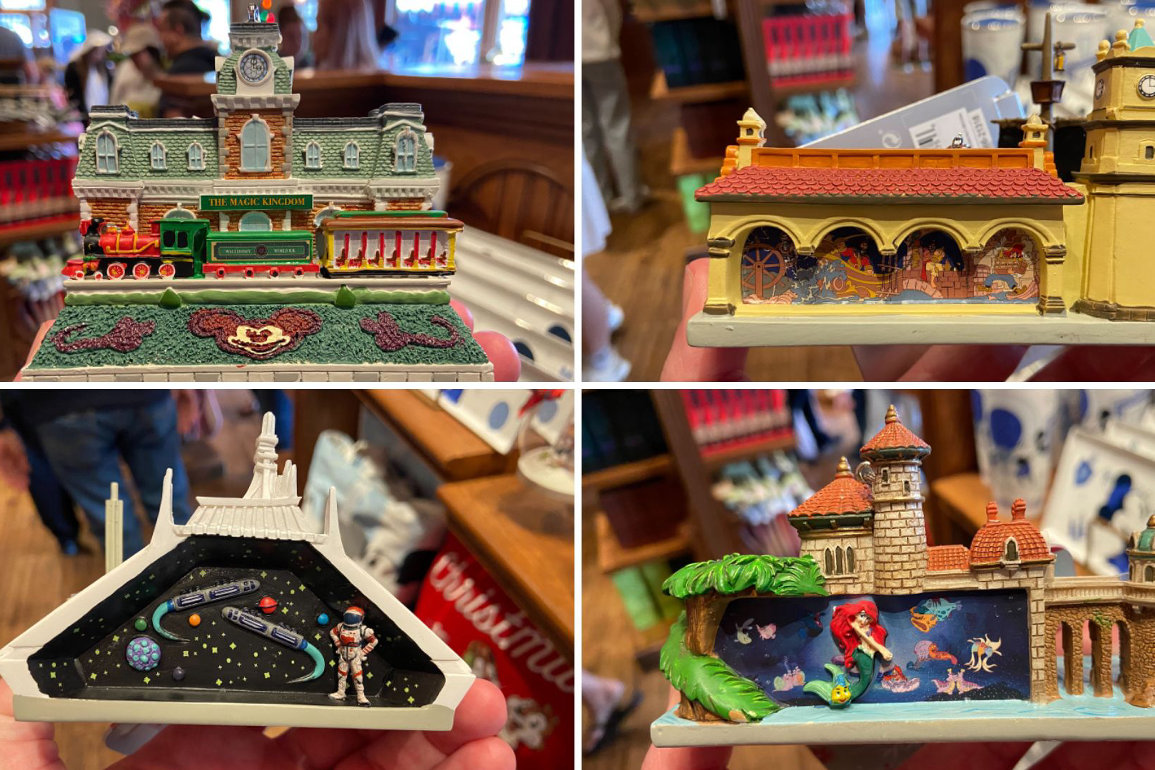 Several new split-building Sketchbook ornaments have arrived at Disneyland Resort. These ornaments are inspired by iconic Disney Parks buildings but feature them split open to show a scene from inside. Though some of these are also Disneyland Resort attractions, these are actually all modeled after their Walt Disney World counterparts. We found them at Plaza Point in Disneyland.

The inside of the Space Mountain ornament shows an astronaut and Space Mountain ride vehicles blasting through space. The background is black with yellow stars and colorful planets.

This ornament resembles the train station at the front of Magic Kingdom, complete with “The Magic Kingdom” sign. It includes one of the trains of the Walt Disney World Railroad parked at the station and the Mickey Mouse flower bed in front of it.

The stairs leading up to the station are on either side.

Mickey, dressed as a train conductor, is standing in the station on the back of the ornament.

This ornament is shaped like Eric’s seaside palace, as seen in both “The Little Mermaid” and Fantasyland at Magic Kingdom. The sign for the attraction is mounted on one of the palace towers.

The other side shows Ariel, Flounder, and Sebastian under the sea with some other fish.

Ariel and Flounder are slightly three-dimensional, while the rest of the image is flat.

The ornament, like the Magic Kingdom building, is mostly light blue and green, with purple banners hanging on the sides of the entrance. The attraction sign, featuring the main characters flying in front of Big Ben, is at the top. Two pirate ship ride vehicles are inside. They have colorful striped sails.

The other side features Captain Hook and Tick Tock the croc in front of Skull Rock.

The building’s clocktower is behind the mast.

On the back, several scenes from the attraction are represented in a mural. The scenes are a skeleton at a ship’s wheel, a pirate captain on a ship, a pirate sitting on a bridge, and a pirate boarding a rowboat with an armful of treasure.

The scenes only show classic elements from the Pirates of the Caribbean attraction and no characters from the films. In fact, the pirate captain appears as he did before he was updated to look like Captain Barbossa.

The ornament ribbons are removable if you would rather display the ornaments on a shelf.

Will you be hanging one on your Christmas tree this year? Let us know in the comments.