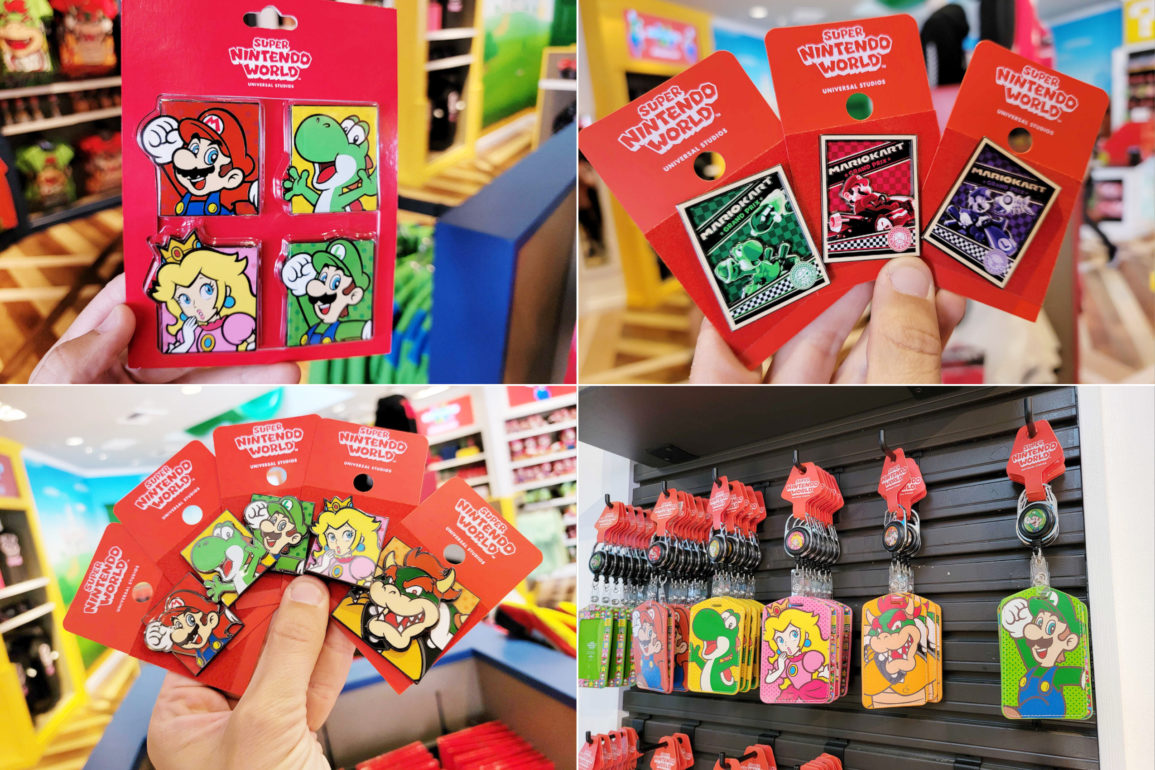 A super assortment of Super Nintendo World items has arrived at Universal Studios Hollywood to join the items we found previously. We found a bevy of Mario All-Stars, including Mario, Princess Peach, Bowser, and more, at Feature Presentation.

Yoshi’s green and black pin is action packed. Yoshi holds a shell at the ready. Bullet Bill is fast approaching Yoshi. The “Shell Cup” icon can be found in the bottom right hand corner of the pin.

Red and black highlight Mario’s pin. The “Mushroom Cup” icon is located at the bottom right.

Luigi races straight into Fish Bone in this purple accented pin. The “Flower Cup” logo appears in the corner.

Next, we looked at this set of four, small pins. The pins feature Nintendo characters and their names, written in Japanese lettering. The set includes: Blooper, in light blue; Bob-Omb, in yellow; Chain Chomp, in blue; and Boo, in purple. The four creatures are displayed on square, black backgrounds.

Here is a cute Bob-Omb keychain. Bob-Omb is black with yellow highlights. Bob-Omb dangles on a chain, which is attached to its Japanese name “Bomb-Hei”.

“Super Nintendo World” and Universal logos appear on the backs of the keychains.

That pesky ghost Boo gets its own keychain. Boo is black with purple highlights. It floats above its Japanese name “teresa” on this eye-catching chain.

Blooper has squirmed its way onto this keychain. The slippery squid is black, with light blue highlights. Its Japanese name “gusso” is featured at the chain’s bottom.

Chain Chomp will keep your keys safe! This hungry Mario character is black, with white and light blue accents. Its Japanese name “wanwan” is just out of reach of the chomping menace.

Next, we looked at this circular pin. Princess Peach, Mario, Yoshi, Toad, and Luigi, are featured around the pin. The pin’s background is white. A multi-colored “Super Nintendo World” logo is displayed in the center. We also spotted a Coin, Star, and Mushroom, amongst the Nintendo characters.

This is a reflective metal pin. It is small and circular. The Mario Kart Shell Cup logo appears in green.

Next in this series, is the Mario Kart Mushroom Cup pin. The Mushroom Cup logo is in red, on a reflective, metal circle.

We also found this Mario Kart Special Cup pin. The smiling crown of the Special Cup logo is lavender. This is another reflective pin that is small, and circular.

The Mario Bros series is filled with mushrooms. And now, you can fill this Mushroom Coin Purse with…coins! This small, plastic coin purse features a cute Mushroom Power-Up. The Mushroom has a large, red top, with white circles. The Mushroom’s oval eyes stare out from a light tan face.

The back of the coin purse features the red Mushroom head, with large, white spots.

The coin purse zipper is black, as is the purse interior.

Bullet Bill aims for his target on this small pin. Bill and his cannon are black, white, and orange. A white skull face appears on the base of the cannon.

Here we spotted a selection of “Super Nintendo World” Badge Holders with Reels. These can be used for luggage tags, or as Universal Park ID holders. Each badge holder is topped with a circular, retractable cord and “reel.” This reel keeps the badge secured inside.

The back of this badge holder features a very contemplative Princess Peach. The background is pink with small, red dots. A smaller illustration of Peach decorates the center of the circular reel.

The back of the Luigi badge holder features a smiling, jumping Luigi. The background is green, with dark green dots. A similar illustration of Luigi is found in the center of the reel.

Here is the front, display window of the plastic badge holder. It features the colorful icon frame, around a solid green background.

The back of this badge holder features a cheerful Yoshi, on a yellow background. A smaller, but just as happy Yoshi, appears in the center of the reel.

The front features the same display and frame. The background is bright yellow.

Mario leaps from the back of this badge holder. The background is red, with dark red dots. A similar illustration of Mario appears on the reel.

Next, we looked at some Super Nintendo World lanyards. This red lanyard features Mario. The character is jumping throughout the lanyard. Small, Mario-shaped silhouettes, are also part of the design. These silhouettes are shaded in light red tones.

“Super Nintendo World,” and “Mario!” are written along the lanyard.

This lanyard, featuring Luigi, is cheerfully colored. The background is green, like Luigi’s cap. Light green silhouettes of Luigi cover most of the lanyard.

This Lanyard Pouch features Luigi and Mario, in the middle of an epic High Five. The colorful “Super Nintendo World” logo appears at the bottom. This plastic pouch can be used for your Universal Park Pass, or other ID. A metal clasp can attach the pouch to a belt buckle, or other apparel.

This Lanyard Pouch features another dramatic illustration of Princess Peach. The “Super Nintendo World” logo is presented in the top, right hand corner. “Princess Peach” is written in white, with light blue outlines. The pouch has some colorful, pink accents.

This set features four, individual magnets. They are square-shaped, with the Nintendo characters popping past the magnet edges. The magnets included are: Mario, with a red background; Yoshi, with a yellow background; Peach, with pink background; and Luigi, in front of his trademark green.

The magnet illustrations are similar in design to the badge holders mentioned earlier.

Finally, we came across five individual character pins. Each pin features a familiar illustration of the Mario cast. The difference here is, each pin has a second dimension. This feature allows the Nintendo characters to really “pop out of” the pin.

This item focuses on Mario “rising off” the rectangular pin. The background is red. Mario’s hat and glove are particularly highlighted.

This pin features Yoshi, bursting from a yellow background.

Luigi’s hat and glove stick out from this playful pin. The background is green, with dark green dots.

Princess Peach’s crown and hair are jutting out of a pink background.

We saved the beast, er, best, for last. Bowser can’t wait to escape the confines of this pin. Bowser pops out of an orange background.

Watch our video tour of the new merchandise below, including the mini backpack seen here.

Grab a kart and race now, to Feature Presentation, in Universal Studios Hollywood, for these delightful new Super Nintendo World items. Which Mario items have you jumping for joy? Let us know in the comments.

Next
REVIEW: World of Color Dessert Party Returns to Disney California Adventure, Is It Worth It?