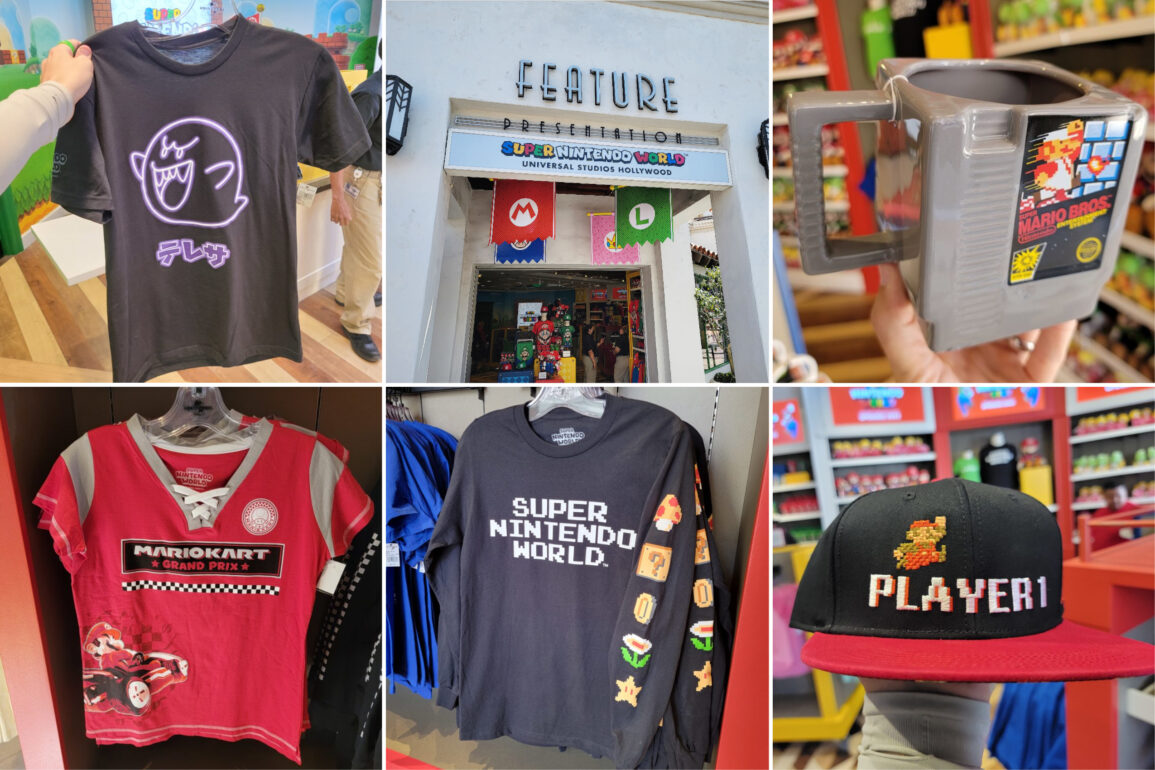 With Super Nintendo World finally opening its second outlet next year at Universal Studios Hollywood, the park has released a plethora of new items themed to the iconic Italian plumber and his pals at the newly-redecorated Feature Presentation. So let’s take a look around the shop and every new item!

Feature Presentation now bears a Super Nintendo World sign on the outside.

Banners for Mario, Luigi, Peach, and Toad hang outside, identical to those seen outside Rodeo Drive Souvenirs at Universal Studios Japan, where Super Nintendo World merchandise is also sold.

Displays in the store show off some of the new items available to guests.

It’s important to note that all discounts do not apply to Super Nintendo World items, and there’s a limit of 4 items per style per transaction.

Many items in the shop we’ve already seen both here in California as well as in Japan.

A giant pipe looms over an area with character t-shirts.

Below a skylight near the registers sits another pipe.

The registers themselves are set in front of a colorful New Super Mario Bros-inspired background. The four registers are those multicolor diamond-pattern bricks again.

A screen with the Super Nintendo World logo for the Hollywood branch is also visible.

Screens bearing the land logo and “Opening 2023” are all around merchandise shelves. Several screens also show off Mario himself.

Many shelves and displays have clever touches like colorful backgrounds, ? Blocks, and Brick Blocks.

But on to the most important part of the store — the merchandise itself!

The front reads “Super Nintendo World” in all caps 8-bit lettering. Icons of a mushroom, ? Block. coin, Fire Flower, and Star run down the left sleeve.

The back features Mario mid-jump with “1Up” coming from above

The front features Mario mid-jump with “Player 1” written below. The front brim is red.

The side bears a stylized Super Nintendo World mark.

Under the brim are various enemies, including Goombas, Koopa Troopas, and Spinys.

Same as the Mario version, except in green and with Luigi.

The red tee features the logo for “Mario Kart: Grand Prix” at the front, presumably how Mario Kart: Koopa’s Challenge will be retitled in the US. On the bottom right, Mario is racing along in his kart.

This black crop hoodie features the art of Mario driving in his kart with a checker pattern down the right sleeve. The Mario Kart: Grand Prix logo sits front and center.

The black tee bears a neon Boo on the front and the katakana for “teresa”, the name of Boos in Japanese.

The cap also features the neon Boo design with “teresa” written in katakana on the brim.

The Super Nintendo World logo is stitched on the right side.

Purple netting covers the back side.

This trucker hat-style cap features a neon Bowser icon on the front, with “kuppa” written on the front in Katakana. Often stylized as Koopa, this is Bowser’s name in Japanese and was used in English for the first few games in the Super Mario series.

A Super Nintendo World logo is stitched on the side.

Black netting covers the back.

This mug features an underground level from the original Super Mario Bros. wrapped around the entire mug.

This square mug bears resemblance to the original NES cartridge for Super Mario Bros, featuring the original label and even the ridges that would line the left side of a cartridge.

The inside has a round exit, although still square within.

This tumbler shows Mario transforming into Super Mario as you rotate it, with imagery based on the original Super Mario Bros. game.

The backpack features neon outlines of a number of Mario enemies, including Gooper Bloopers, Bob-Ombs, Bowser and Bowser Jr., and Boos. All have their Japanese names written below in katakana.

A Super Nintendo World patch is at the top middle.

Just like the backpack, the fanny pack features neon outlines of a number of Mario enemies, including Gooper Bloopers, Bob-Ombs, Bowser and Bowser Jr., and Boos. All have their Japanese names written below in katakana.

A Super Nintendo World patch sits at the lower right.