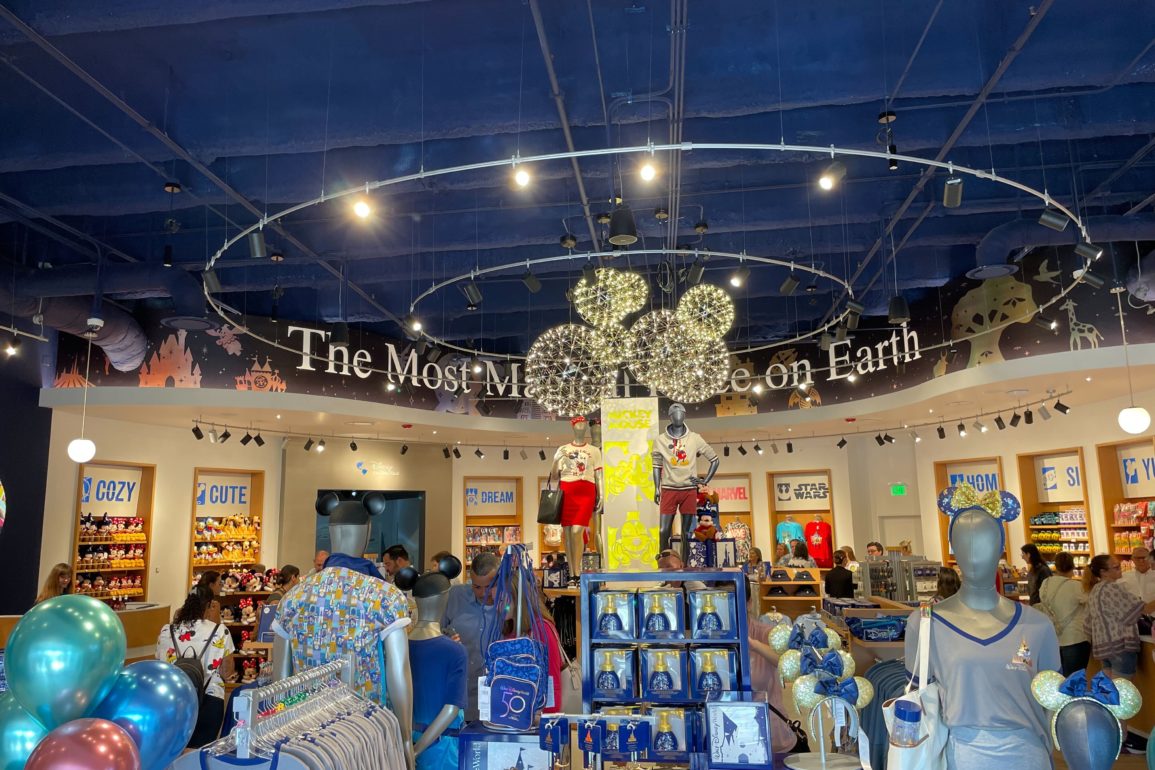 The store is beneath the new art installation currently advertising the 50th anniversary of Walt Disney World.

Inside, the store’s ceiling is lined with images of Walt Disney World icons in EARidescent colors for “The Most Magical Celebration on Earth.”

50th anniversary merchandise is on display at the front.

There are two circles of lights, with a larger lighting fixture made of several orbs at the center.

The walls are white, with built-in shelves. The shelving units are light brown wood and each display has a different word above it. Specific franchises, like Disney Princess, Pixar, Marvel, and Star Wars are labeled.

Mickey’s silhouette, “Walt Disney World,” and “The Most Magical Place on Earth” are in silver on the wall behind the register. Most of this wall is royal blue, but a section is brown set into a white unit.

The counters are brown wood with white tops.

One corner is the ticket center, with another royal blue wall displaying screens featuring various images from Walt Disney World.

The giant silhouette of Cinderella Castle is in silver on the wall.

These curved counters are also brown and white.

The ticket center also has a small seating area, with an orange bench and stools around white tables.

Guests can step inside a small room, with projections displaying different Disney Vacation Club destinations on the walls.

A tablet sits on a podium, and guests can use it to choose different locations. The options are Disney’s Polynesian Village Resor, Grand Floridian Resort, Riviera Resort, and Aulani.

After choosing a resort, you can pick a room to tour.

This Walt Disney quote is above the door when exiting the stoor: “Laughter is timeless, imagination has no age, dreams are forever.”

Watch our video tour of the Walt Disney World Store below.