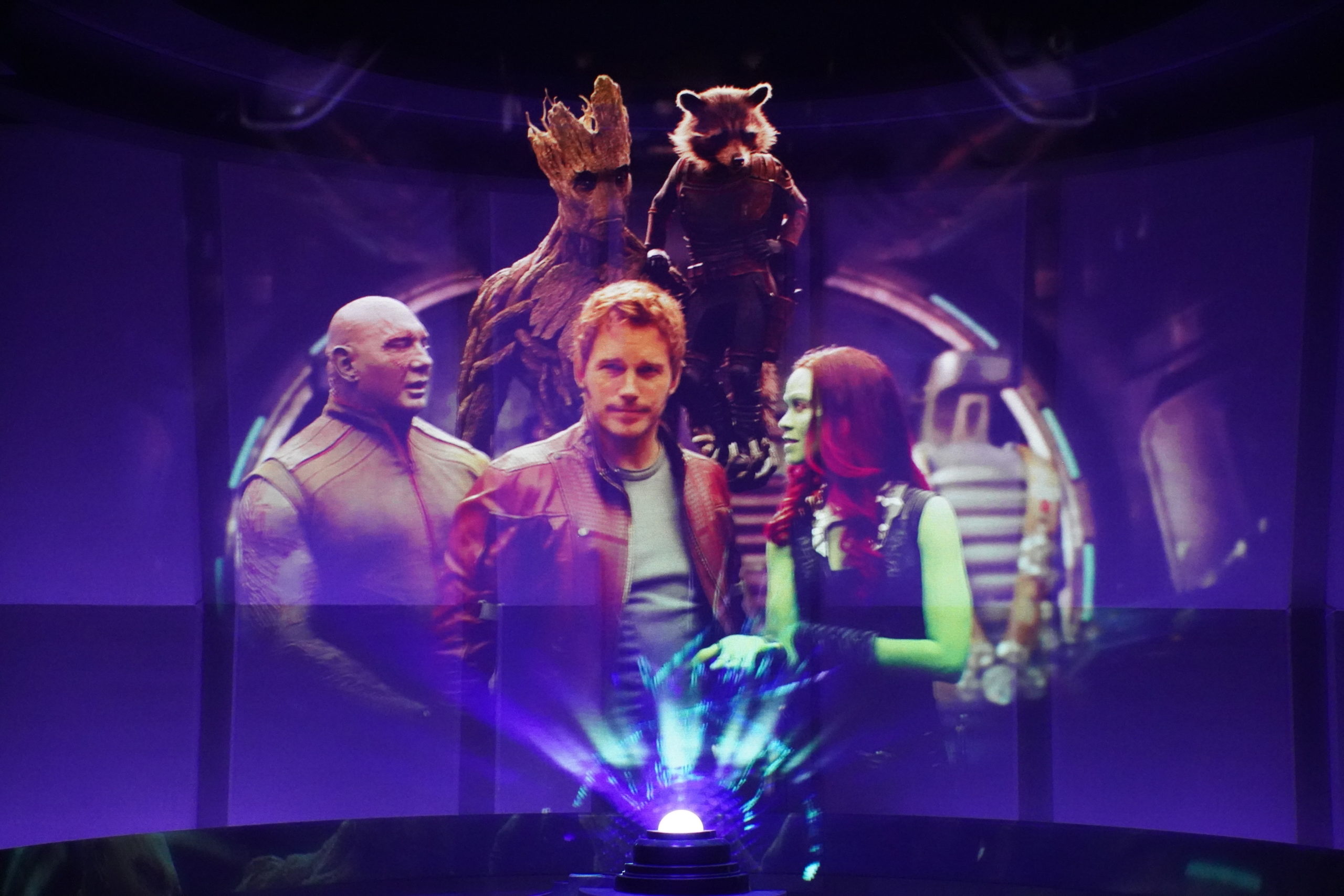 We’re at EPCOT this morning for the first Annual Passholder previews for Guardians of the Galaxy: Cosmic Rewind! We’ve got a full photo and video tour of the entire experience from entry to exit at the Wonders of Xandar pavilion. Climb aboard a Starjumper with us and let’s save the galaxy. (Warning: this article contains major and minor spoilers for the attraction.)

As the ride is still in previews, there are temporary walls and planters barricading the courtyard.

Otherworldly symbols cover the ground at the base of the ship.

Cast Members greeted us at the tapstiles outside the entrance. Instead of reading “Lightning Lane” or “Boarding Groups,” the signs said, “Welcome Terrans.”

A sign outside details the safety warnings for the attraction.

The advisory reads, “Be aware that you will be transported to a Nova Cruiser orbiting above Terra for a demonstration which will consist of a thrilling high-speed, turbulent — what you Terrans would call a ‘roller coaster-type ride’ that goes forward and backward through the dark. It includes sharp turns, sudden drops and stops.”

The Wonders of Xandar symbol is on the tapstile.

Guests pass the Nova Corps logo on their way to the entrance.

The Wonders of Xandar text logo is front and center when you enter the double doors.

Once inside, guests enter the Galaxarium. The large screen above changes as part of a presentation on Xandar.

The presentations are narrated by Worldmind, a Xandarian supercomputer.

We spotted a turkey leg!

Trash and recycling are located in the Galaxarium with labels in English and Xandarian.

We proceeded into the next area of the queue featuring some geometric pendant lamps.

It travels up a series of switchback ramps that lead to the Xandar Gallery.

The Xandarians incorporated some of the design principles of EPCOT into their city planning, as seen in a presentation here. Walt Disney’s original presentation of EPCOT is featured.

A model of a Xandarian city is on display.

The placard reads, “Xandar is home to more than twelve billion citizens, who have come here from all corners of the Andromeda Galaxy — to enjoy our advanced quality of life and cultural vibrancy.”

Some Nova Corps uniforms can be seen, along with a guide to the rank insignia.

A model of a Starblaster ship is also on display, similar to the one outside the attraction.

The placard reads, “The Starblaster is the flagship short-range aerial patrol and combat ship of the Nova Corps. Its star-shaped profile is reminiscent of our Nova Corps emblem, and serves to optimize the ship’s thruster array for speed and maneuverability.”

A screen in the queue features footage from “Good Morning Xandar,” a morning talkshow where the host has interviewed the Guardians regarding their defeat of Ronan and the Kree.

Interviews with Rocket Raccoon and Groot alternate with Star-Lord and Gamora. Footage from “Guardians of the Galaxy: Vol. 1” is shown as well.

During his interview, Star-Lord expresses excitement about returning to EPCOT to ride attractions like Horizons, Universe of Energy, and catch a viewing of Kitchen Kabaret. (Unfortunately, Quill hasn’t been updated on what’s open… and what’s long gone.)

A model of the Guardians’ ship, the Milano, is on display.

The placard reads, “The Milano is the personal transport craft of Terran Peter Quill, and played a key role in the Xandar-Kree Battle. In gratitude for the role the Guardians played in saving Xandar, the ship was rebuilt and presented to these heroes by Nova Prime.”

The first pre-show room is the Welcome Center, where we are greeted by Nova Prime Irani Rael (Glenn Close).

For fans of theme park flooring, here’s a closer look at the geometric designs of the carpet in the Welcome Center.

Nova Prime Irani Rael explains that they were able to reach Earth using the Cosmic Generator (pictured above) that creates jump points and artificial tunnels to travel through space. They have come to share the technology with Earth so we may explore space more easily.

We are invited to join them on a Nova Corps Starcharter ship (as pictured) above the planet for a demonstration of the Cosmic Generator.

Here we also meet Centurion Tal Marik (Terry Crews), who can’t decide if we are called “EPCOTians,” “Citizens of EPCOT,” or “EPCOT-Terrans.”

He invites us into the Phase Chamber.

Next, we enter the Phase Chamber, where we will be transported to the Nova Corps ship above Earth. Tal Marik warns us that they have never transported Terrans before, but since our molecular structure is similar to Xandarians, we should be fine.

That is, as long as we stay inside the line of lights in the chamber.

We arrive onboard the Nova Corps ship with a view of Earth.

Our visit is interrupted by an emergency. Unfortunately, the Cosmic Generator has been stolen.

This is where we encounter Eson, the ride’s villain. He has the Cosmic Generator and has decided that Terrans have failed a test and must be destroyed. He takes the Earth through a jump point.

Marik contacts the Guardians of the Galaxy to help out. Rocket Raccoon reprograms the Starcharter’s escape pods (the Starjumpers) to track down Eson.

As instructed, we proceed to the Starjumpers.

Guests will walk from the last pre-show room to the load area.

There are posted warnings advising guests of the circumstances under which they should not ride.

The signs feature homages to the logo for Universe of Energy, which Cosmic Rewind replaced.

We are finally boarded into a Starjumper and prepare for launch.

The Guardians of the Galaxy communicate with us on screens.

After a last missive, we are go for launch.

The coaster moves forward at first through the tunnel and past Eson.

The Guardians arrive, the cars rotate, and we are off on the first reverse launch coaster at Walt Disney World.

Each ride features an 80s-era soundtrack. The song is randomized, so you may hear a different one on each ride. The options are:

For our first ride, we heard “September” by Earth, Wind & Fire.

When we run back into Eson, the Nova Corps have restrained him so we can safely escape.

We have safely returned to the Wonders of Xandar pavilion!

The Guardians greet us upon our safe return.

There is a QR code cube in the queue to scan to have your on-ride photo added automatically.

The photo is taken just around the curve after the reverse launch.

Another version of the geometric pendants hang at the exit.

At this exit, there is a mirror. The sign beside it reads, “Observe” and “You are now entering EPCOT. Smile, you are representing all Xandarians. Do it well.”

We were not allowed to see the Treasures of Xandar gift shop or any merchandise today. Typically, the ride will exit through the gift shop.

Watch our full video of the entire attraction below.

Guardians of the Galaxy: Cosmic Rewind officially opens on May 27. The ride will only offer a virtual queue and Individual Lightning Lane upon opening with no standby option available.

3 thoughts on “PHOTOS, VIDEO: Take a Ride on the Guardians of the Galaxy: Cosmic Rewind Roller Coaster at EPCOT”