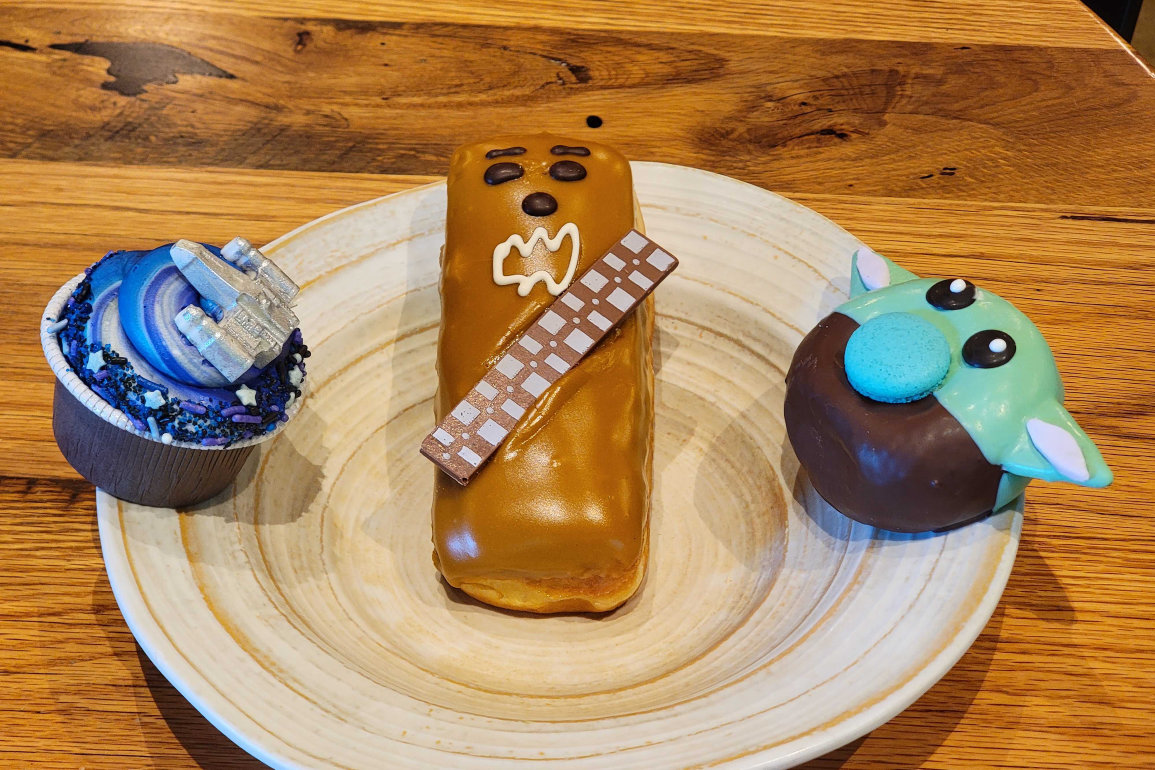 Just a bit after Star Wars day a couple of weeks ago, three new “Star Wars” treats have landed at Disney’s Grand Californian Hotel & Spa in the Disneyland Resort, so naturally, we had to try them all!

Watch our video review below and keep scrolling for closeups and prices for each item!

This donut brings to mind the iconic Wookiees such as Chewbacca, with its brown icing, a set of eyes, eyebrows, and a mouth done in milk chocolate icing, and a white iced beard, as well as a solid chocolate bar to look like Chewie’s iconic bandolier.

This is really just a fairly straightforward maple long john donut. Even with the chocolate bandolier bar, there was nothing particularly special. And the bandolier bar doesn’t really stay with the donut, it just falls off and is eaten on the side. It’s certainly better than a regular maple only because it’s themed and fun, but the taste is nothing special, and perhaps not worth $9.

Somehow the most economic of the three despite also having a macaron, this rounded donut with icing ears brings to mind The Child (Grogu) from “The Mandalorian”.

Sadly, this was just another fairly run of the mill donut. Although this time, it’s a cake donut dipped in milk chocolate and then half dipped again in white chocolate, with white chocolate ears.

While there appears to be macaron in his mouth, it’s actually just the top cookie part without the cream center or bottom cookie, which would have been a nice touch had it been present. Overall, a fairly ordinary donut, only made better because it’s nicely themed.

Finally we come to this cupcake, which appears to have an X-Wing on top of a blue-purple-white swirl that calls to mind the iconic lightspeed travel in the “Star Wars” franchise.

Surprisingly, this is the one item out of the three that stands out. With a hefty dose of frosting on top and a white chocolate X-Wing coated in edible silver paint, the outside belies the flavors inside. Hidden within the center of the cupcake is a creamy strawberry lemon filling that really sets off the flavor of the entire cupcake. This, unlike the two donuts, bring something to the table that is not expected or ordinary. It’s a welcome surprise, and makes this a more fun treat than the others.

You can find all three of these at GCH Craftsman Grill inside Disney’s Grand Californian Hotel at Disneyland Resort. Let us know what you think in the comments below!