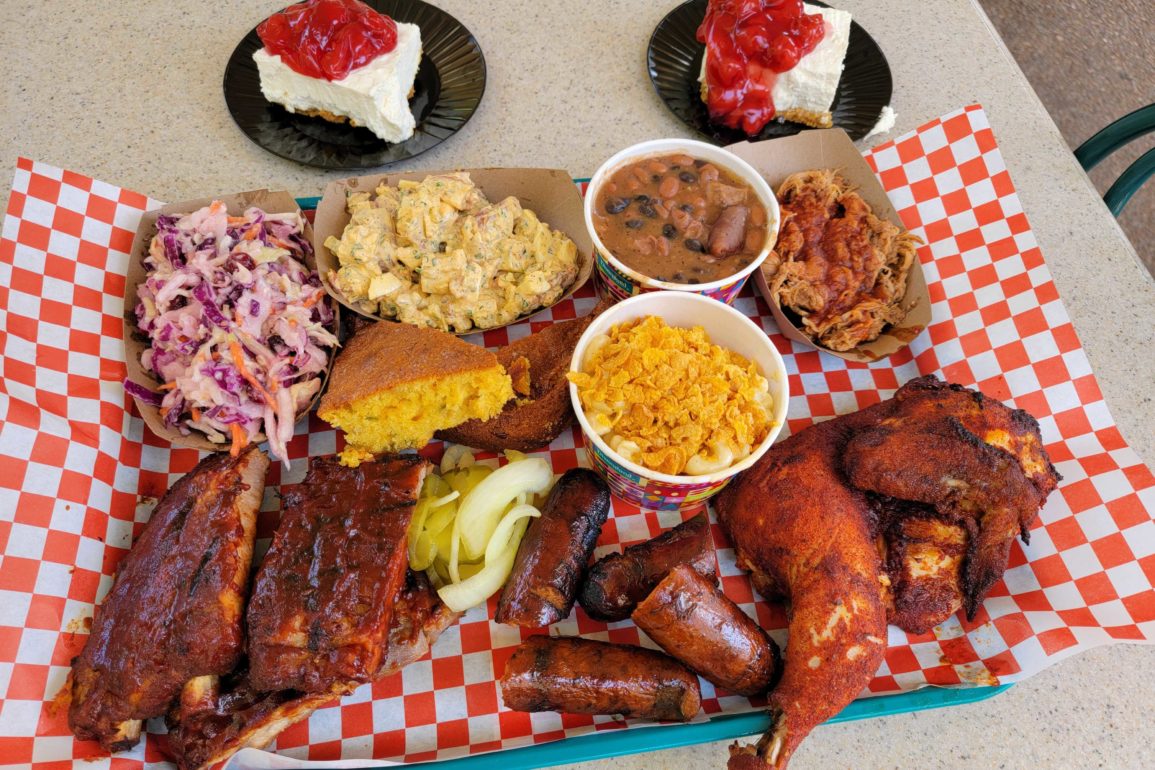 Paradise Garden Grill has debuted a new BBQ-centric menu at Disney California Adventure for the summer, so we had to stop by and try out some of the new dishes.

You can get a St. Louis-style BBQ-rubbed chicken, a North Carolina-style BBQ pulled pork sandwich, or a Kansas City-style BBQ spare ribs entrée. The Family Platter includes all three plus all the sides, so we opted for that. The new Impossible BBQ Burger does not come included in the platter.

It’s a rather commonplace burger with a touch of barbecue sauce, coleslaw, and fried jalapeños. The plant-based potato salad is fine, somewhat run-of-the-mill, but not unenjoyable.

There’s nothing wrong with the meal, and if you’re looking for a mix-up from the regular Impossible Burgers around the park, it’s a solid choice.

It was a sweeter rub than expected, but not unpleasant. However, slathering it in barbecue seasoning does not make this a delicious barbecue chicken. Overall, on all of these meats, we were missing the Smoky richness that barbecue cooking brings. Having a restaurant that offers nothing but barbecue, we were expecting a little more from this.

The pork itself is unremarkable but paired with the vinegar-based barbecue sauce, this one becomes one of the better entrées on the platter.  This is also available as a sandwich if ordered separately, and it seems like it may be better on a sandwich paired with coleslaw and a fresh bun than on its own.

The barbecue sauce is baked into the ribs as they’re being finished, making them sticky and sweet. They are hearty, meaty ribs that satisfy, but don’t astound.

The clear favorite of all the meats on the platter. Not quite smoky, but spiced and tastes more like what we expect from barbecue. It’s clearly been grilled, and that helps bring some crunch and texture to the sausage. It hides a subtle hint of spice that isn’t overpowering, but is present nonetheless. We enjoyed this one the most of all the meats. It’s available to be ordered as a side for $6.99.

These are some of the most unique baked beans we’ve ever had anywhere. A combination of pinto beans, black beans, and refried beans stewed together with spices make for a one-of-a-kind dining experience. Not necessarily what one would expect of a baked bean dish, but something wholly its own. They’re very pleasant and uniqueness pushes it up to the next level to make it a memorable dish. You can get this by itself for $4.99, and we’d come back for them again.

with Eggs and Bacon

The bacon potato salad is a showstopper. It’s hearty and creamy, and jam-packed with bacon and hard-boiled eggs. This feels like a potato salad you would have at a hometown picnic rather than at a quick-service window in a theme park. We thoroughly enjoyed this potato salad and wish that it was available in entrée size. You can order it separately for $4.99.

Of all the sides on the family platter, this one was the weakest. It’s not unpleasant, but the other sides were uniquely good while this fails to shine. It’s fine, and it may do better on a sandwich paired with the pulled pork than it would as a side on its own.

Surprisingly good, especially for a theme park. Cornbread is often far too dry and monotonous in flavor, but this cornbread is moist and delicious, almost like a cake. The addition of jalapeños and a little bit of cheese goes a long way to mix things up and bring some variety, spice, and surprise to the old standby.

This cheesecake is surprisingly light. It’s fluffy, almost like whipped cream on a graham cracker crust. The canned cherry sauce on top brings a touch of tartness that is welcome, but wouldn’t be missed if it were omitted.

Watch our full video review below.