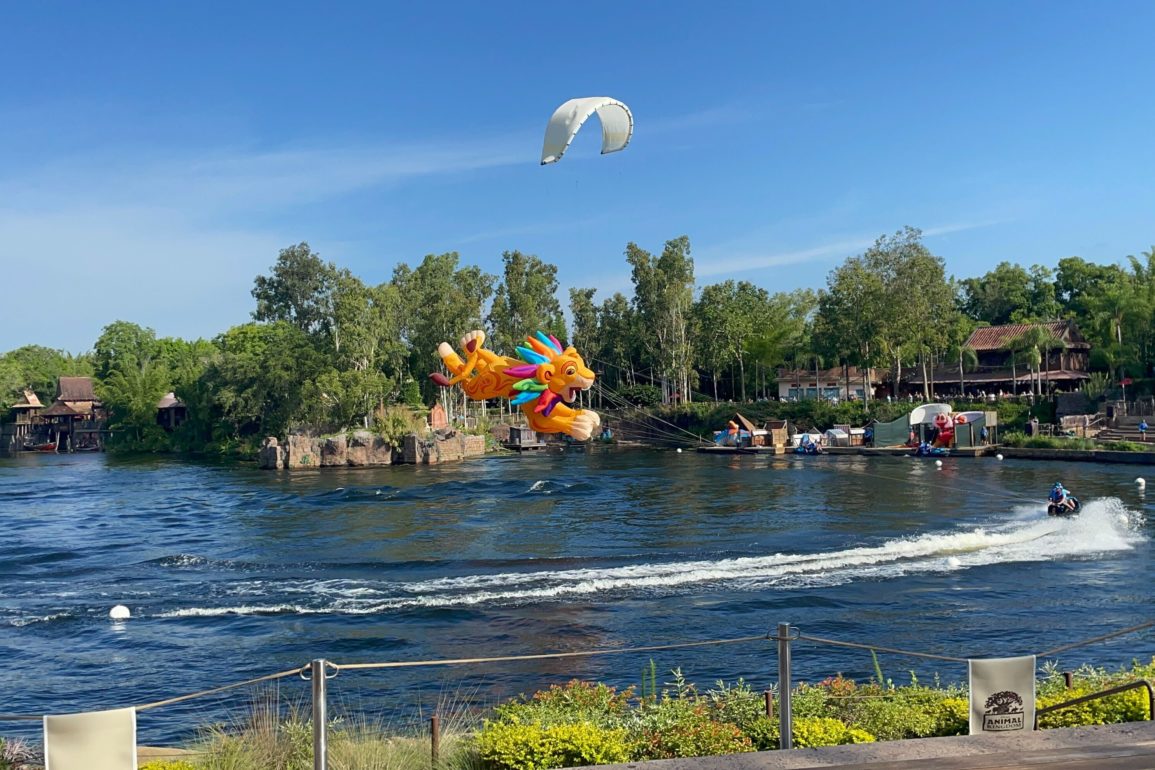 The first show we saw was “The Lion King,” a five-minute show featuring “Hakuna Matata” and “I Just Can’t Wait to Be King.”

Each show is centered around different kites. This show features the young Simba and Timon and Pumbaa kites.

The kites still look great aloft in the air, even without live performers to accompany them.

As the Simba kite landed, the show ended rather abruptly.

A kite of flying fish joined the performance.

Several minutes later, the second show began. This one featured the adult Simba kite soaring around to “Circle of Life.”

The kite emerged from its holding area before taking to the sky.

The Zazu kite is also part of this performance.

The kite travels around Discovery River Lagoon several times before the show ends. All in all, it lasted three minutes.

You can watch both performances inspired by the 1994 film in our video below!

Between shows, character flotillas roll by. While this is going on, Cast Members set up for the next performance.

Between the kites and the flotillas, there always seems to be something going on around the lagoon.

The scheduling of the shows seems to revolve around the flotillas, which traverse the waterways around the park.

The next two shows were themed to “The Jungle Book.” First, the King Louie kite flies around to “I Wanna Be Like You.”

His majesty is accompanied by six kites with colorful tails that form a rainbow.

Eventually, the kite lands, and the performance is over. It lasts approximately three minutes.

Finally, the Baloo kite came out to the tune of “The Bare Necessities” in a three-minute show.

He’s joined by the kite that looks like a bunch of prickly pears.

Adding to the fun, a “boing” sound effect plays when the kite crash-lands. Altogether, watching and waiting all four shows took a little over an hour, punctuated by the flotillas.

You can watch them in our video below!

You can compare these new performances to the old shows by watching our videos from the original versions here:

Do you prefer the new, shorter performances or the longer, scheduled show? Share your thoughts in the comments!

Next
Walls Down Around Guardians of the Galaxy: Cosmic Rewind Courtyard in EPCOT as Ride Officially Opens