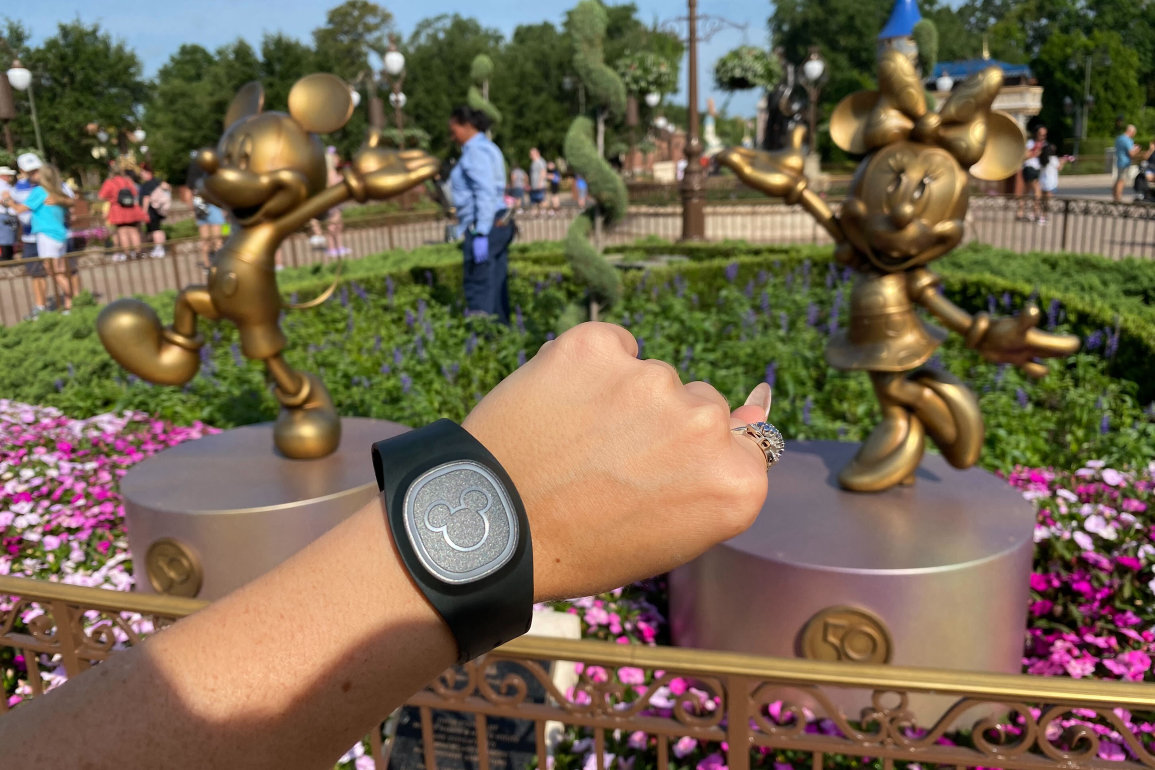 Despite MagicBand+ not being officially released yet (except for an accidental early leak), the slow rollout of effects for the Fab 50 character statues has begun around Walt Disney World, with our latest look coming from the Magic Kingdom. Check out our video tour, or read on for a full recap of our experiences!

The first effect we were able to experience was the statue of Lady and the Tramp, just steps from Tony’s Town Square Restaurant on Main Street, U.S.A. Roughly ten feet from the statue, our MagicBand+ began to vibrate, similar to what we experienced at EPCOT just yesterday. When we waved our hands in front of the statue, we heard the sound of dogs barking. A second wave produced a short audio clip of a strumming mandolin. Unlike at EPCOT, we got to experience a third sound effect consisting of a magically-inspired musical sting, perfect for the Magic Kingdom.

Heading into Tomorrowland, we had similar luck with the Stitch statue from about the same distance. Several sound effects play here as well, with Stitch saying “Hello!” in one effect, and for a second one, he says, “Stitch happy to meet new friend! Be happy too!” On our third try, we heard a sting of Polynesian-inspired music, reminiscent of “Hawaiian Roller Coaster Ride.” Additional tries produced Stitch saying “Hello! Stitch is right over here!,” I am Stitch. You are part of my ‘ohana!” On our sixth attempt, we heard the same magical music sting as the Lady and the Tramp statue, suggesting that many, if not all, statues in the park will eventually play this clip.

Over at the park’s Hub, we heard effects in front of the statue of Minnie Mouse (though Mickey’s statue wasn’t working yet). On our first wave, we heard Minnie say “Hello!,” while on our second pass, we heard a jaunty musical clip that feels like it came right out of a cartoon. Our third try got Minnie to say “Have fun now! Remember, I love you!,” while on the fourth, we got “Yoo hoo! Over here! It’s me, Minnie!”

When we passed by later, Mickey’s speaker was playing more sounds for Minnie, including a different cartoon jingle (suggesting that one of them is for Mickey and one is for Minnie), Minnie humming to herself, and finally, her saying “It’s so magical!”

Moving around the Hub, it seemed fitting that things were kind of funny over by the statues of Pluto and Goofy. Initially, Goofy’s sound effects came out of the speaker in front of Pluto. On our first try, we heard Goofy say “You’re here! My wish came true!”

The second pass gave us an easygoing cartoonish song complete with whistling, while the third produced the famous Goofy holler.

It was finally on our fourth try that things started to work out. We heard Pluto bark on one pass, but another one put us back to Goofy, saying “Heya pal, enjoy your day!” As we moved closer to the Goofy statue, we heard a different cartoon theme, then Pluto barking again, followed by Goofy humming and saying “I like singing.”

As we learned, if you stay in one spot, roughly a minute passes before each vibrating alert. Unfortunately, this could lead to backups of guests trying to hear every audio effect.

A similar situation occurred at the statues of Donald and Daisy Duck, with Donald’s sounds coming from the speaker near Daisy’s statue. On our first pass, we heard Donald’s angry quack, with him much happier on the second try, where he said “Oh boy, oh boy, this is fun!” We then heard “Hi, everybody, it’s me, Donald!” Daisy finally showed up on the fourth try, saying “Oh! I love magic!” Donald returned on attempt number five, saying “I’m here, everybody!” Each statue has its own cartoonish theme music.

Moving on to Chip and Dale’s statue, we first heard them say “I love it here! Me too!” Our second pass got them to say “You know what’s funny? No, what? You!” followed by laughter. Our third try produced a triumphant cartoon theme, reminiscent of the theme to “Chip ‘n Dale: Rescue Rangers.” On our fourth attempt, we heard “We’re just hanging out? Want to join us?” Next, we heard this fun exchange: “I wish I could play here every day! You do, Dale! Oh yeah!” with more laughter. We also heard the Magic Kingdom music, then “Say hi, Dale! Hi, Dale!” We also heard “So fun, huh? Yeah!”

Moving onto the pathway leading to Adventureland, we got to hear some sounds from the statue of Winnie the Pooh and Piglet. The first pass got us the same Magic Kingdom music we heard elsewhere, while the second one got us the sound of birds chirping and bees buzzing. Finally, we heard a playful tune inspired by the world of the Hundred Acre Wood.

Heading deep into Fantasyland, we were able to get the Magic Kingdom music at the statue of Jaq and Gus, and on a second wave, we heard a silly, whimsical tune.

Passing by the statue of the Cheshire Cat, we first heard the general park music, then a second sting inspired by the music of “Alice in Wonderland.”

Speaking of Wonderland, the Mad Hatter greeted us with a “Good day to you!” when we waved our bands by his statue.

Meanwhile, Pinocchio’s statue showed off the character’s optimism, saying “If I’m good, I’m going to be a real boy!”

At the statue of Lumiere and Cogsworth, we heard the sound of a ticking clock, ending with a chime.

By the statue of Dumbo and Timothy Q. Mouse, we heard the Magic Kingdom music, as well as a jaunty circus-like song reminiscent of “Casey Junior.”

Heading into Adventureland, all we could hear from the Abu statue was the same general Magic Kingdom sting.

We heard two musical clips from the Orange Bird statue, including the general park sting, and a ’70s-esque bossa nova clip.

Which effect is your favorite? Share your thoughts in the comments!

Next
Bridge Removed, Some Scaffolding Comes Down Around Site of Former Tarzan’s Treehouse at Disneyland