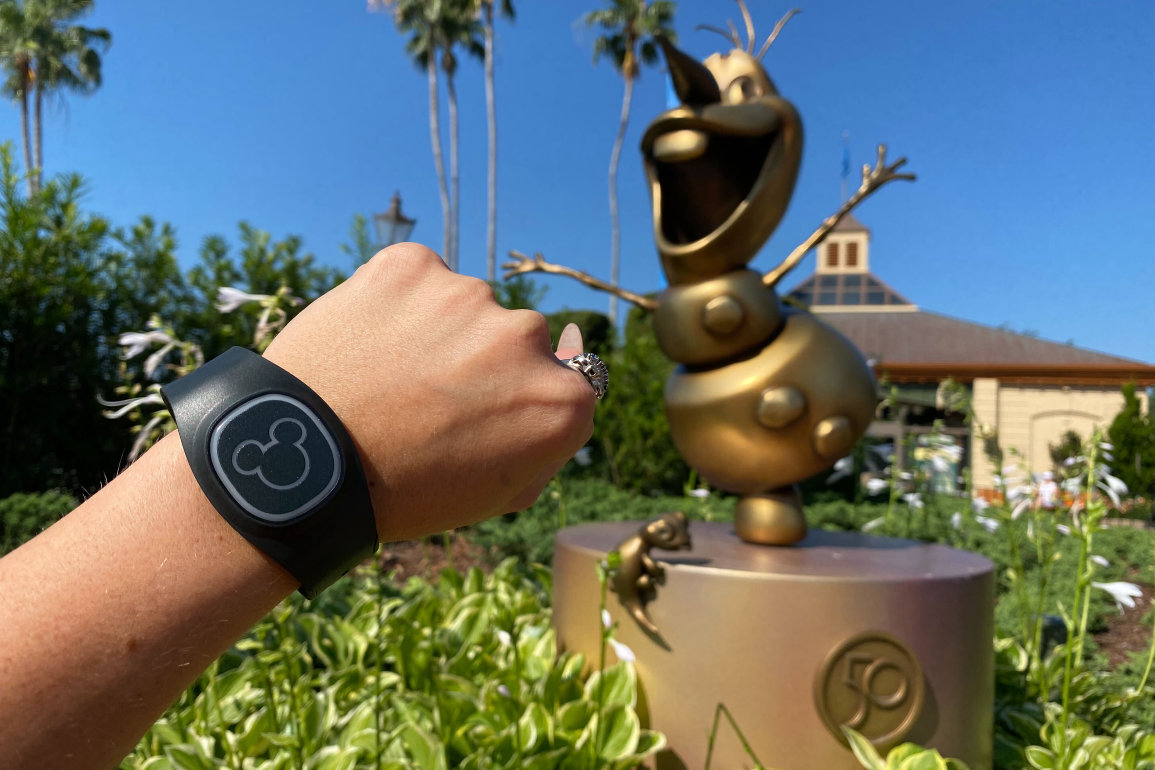 After months of anticipation, we got our first MagicBand+ interactions with the Disney Fab 50 statues at EPCOT this morning!

You can watch our video of the interactions as part of the Fab 50 Quest in the video below, or read on for a complete description of our interactions!

While walking around the statues, our reporter’s MagicBand+ had a spinning blue circle around the Mickey Mouse head. When waving her hand, the circle kept spinning, but a vibration could be felt. Our first bit of luck with the MagicBand+ came at the statues of Miguel and Dante from “Coco” just steps from Disney Traders.

When our reporter waved their MagicBand+, the sound of a guitar strumming could be heard from beneath Miguel’s statue, following by some barking below the Dante statue. On a second wave, we got a quick clip of music from the park.

We had to wave really aggressively to get the effect to play, but it’s unclear if that is because MagicBand+ wasn’t supposed to debut yet (as we learned from an accidental early release this week), or if this is supposed to be how the effects activate.

Over by Rocket and Groot, we got to hear a funky bit of music, similar to The Jackson 5’s “I Want You Back,” which alternates with a version of “Legacy,” as we heard at the Miguel and Dante statues.

Meanwhile, over at the Olaf and Bruni statue, alternates between saying “la la” and “Hey, guys!”

At the statue of Pua and Hei Hei, the effects alternate between Pua oinking and Hei Hei clucking and the EPCOT music.

Another interesting thing to note is that when near a statue, the band vibrates approximately every thirty seconds or so until you wave it. The range seems to vary, as we had to stand directly in front of the Dante and Olaf statues to get the effect to work, but we were roughly thirty feet away from the Figment statue when were notified to try waving. (Unfortunately, it seems that the effects on that statue haven’t been activated yet, as with all of our trying, we couldn’t hear anything.) Three vibrations will signify a statue is nearby, while a single vibration will signify that a sound effect is coming. After the effect plays, two vibrations let us know we could try for another effect.

Are you excited to take on the Fab 50 Quest? Share your thoughts in the comments!

Next
Closer Look at Details of Guardians of the Galaxy: Cosmic Rewind, Treasures of Xandar, and Attraction Merchandise at EPCOT