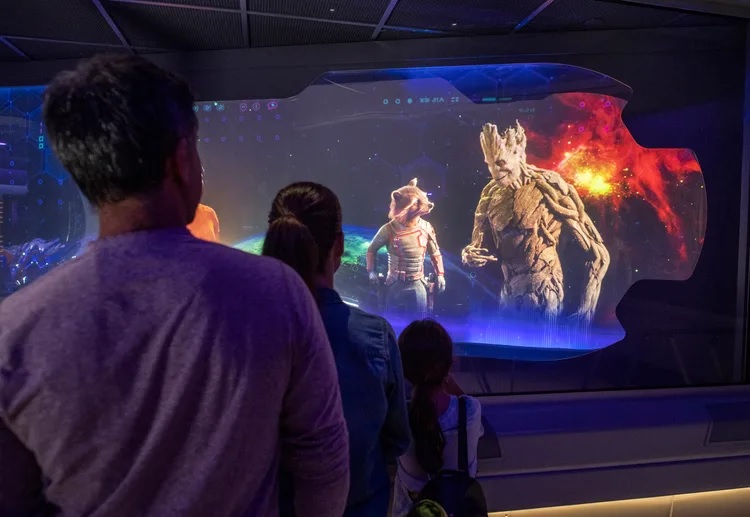 Closer Look at Details of Guardians of the Galaxy: Cosmic Rewind, Treasures of Xandar, and Attraction Merchandise at EPCOT

With previews already underway, Walt Disney World has released a bevy of new official photos of what guests will experience when they visit Guardians of the Galaxy: Cosmic Rewind at EPCOT. Spoiler warning: the following photos and information give away plot points and details for the new attraction.

From the outside, we can see the attraction building in the light of day (as we’ve seen already), as well as the gorgeous new lighting scheme at night.

There’s also a much better view of the “Wonders of Xandar” sign that greets guests as they enter the pavilion.

Upon entering, guests will experience the Galaxarium, which will feature thirty minutes of exclusive footage that explains the connections between Xandar and Earth.

In the Xandar Gallery, displays show off highlights of Xandarian culture, including the above model of the planet’s city-like surface.

There are also displays of Nova Corps ships, including the Guardians’ ship, the Benatar.

Another feature of the pre-ride experience is the Xandarian Phase Chamber, to transport guests to the center of the action.

Rocket and Groot appear in a pre-show video.

Additionally, guests will also learn about Eson, the Celestial, who serves as the villain of the ride.

Prior to boarding their Starjumpers, guests will pass through the loading bay of the Starcharter, commanded by Centurion Tal Marik, played by Terry Crews.

And yes, there is a ride to go along with all of this!

Some footage of the ride was released in a teaser last week.

The Guardians will battle Eson, but it looks like they won’t be alone, as the Nova Corps armada arrives to help.

We also got a look inside the Treasures of Xandar shop, which will be home to merchandise centered around the attraction.

Don’t dismay, Baby Groot fans! Even though Groot will appear in his adult form in the attraction, a model of his youthful self will be on display in the shop.

The shop will be operated by The Broker, whose face can be seen on a screen in the store.

Still looking for that Baby Groot Big Feet plush? You can find it at Treasures of Xandar.

Show off your new status as one of the “Honorary Guardians” with this spiffy-looking baseball cap.

And as alluded to in other previews, some merchandise will pay homage to the designs of EPCOT’s past, including this retro-looking mug above, which has a matching t-shirt, as seen below.

Guardians of the Galaxy: Cosmic Rewind officially opens to the public on May 27th.