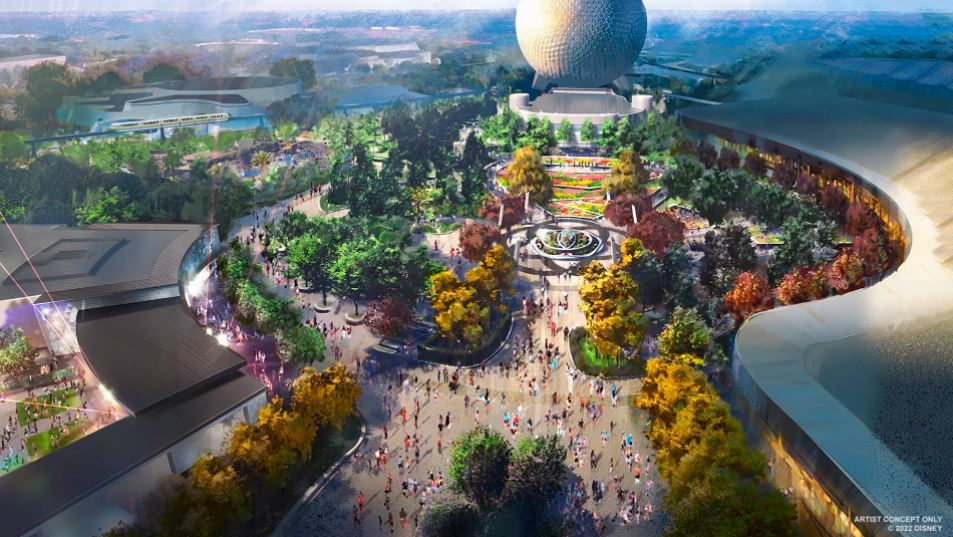 Disney has released new concept art of the reimagining of EPCOT, acknowledging many of the budget cuts that have occurred since the original detailed announcements in 2019.

In the wide aerial view, we can immediately see the difference compared to the previous concept art (pictured below). Most notable is the absence of the festival center featuring a rooftop area. A “downgraded” version including an outdoor stage has replaced it. What is funny is that some of the building matches the shape of the one they demolished for the planned Festival Pavilion.

The expected changes to Project Tomorrow and the exit of Spaceship Earth are also missing, seemingly confirming that the more major changes to Spaceship Earth are no longer on the slate. However, a refurbishment of the ride is still expected. Dreamers Point, featuring a statue of Walt Disney, is not visible in the new concept art, but it was included in the layout view shown below.

The gardens may still include the Beer Garden and other areas that were planned for the central zone before, but nothing has been announced at this time.

Here’s a look at the new festival area coming to EPCOT instead of the larger pavilion. These will be named CommuniCore Hall and CommuniCore Plaza after the former Future World pavilions. CommuniCore Hall was not given detailed concept art but will reportedly be in the structure beside the stage. It will be home to a Mickey & Friends meet and greet area, demo kitchen, mixology bar, gallery space, and more.

The concept art of a central plaza was also updated to reflect the transformation into CommuniCore Plaza. Two long-lasting staples of the area will return: a massive EPCOT logo on the ground and some sort of light-up pavement.

The festival Gardens are depicted to include changing displays such as the one above, which are decorated for the International Festival of the Holidays in this art.

Previous
Closer Look at Details of Guardians of the Galaxy: Cosmic Rewind, Treasures of Xandar, and Attraction Merchandise at EPCOT

Next
CONCEPT ART: Detailed Look at Journey of Water Inspired By Moana Coming to EPCOT