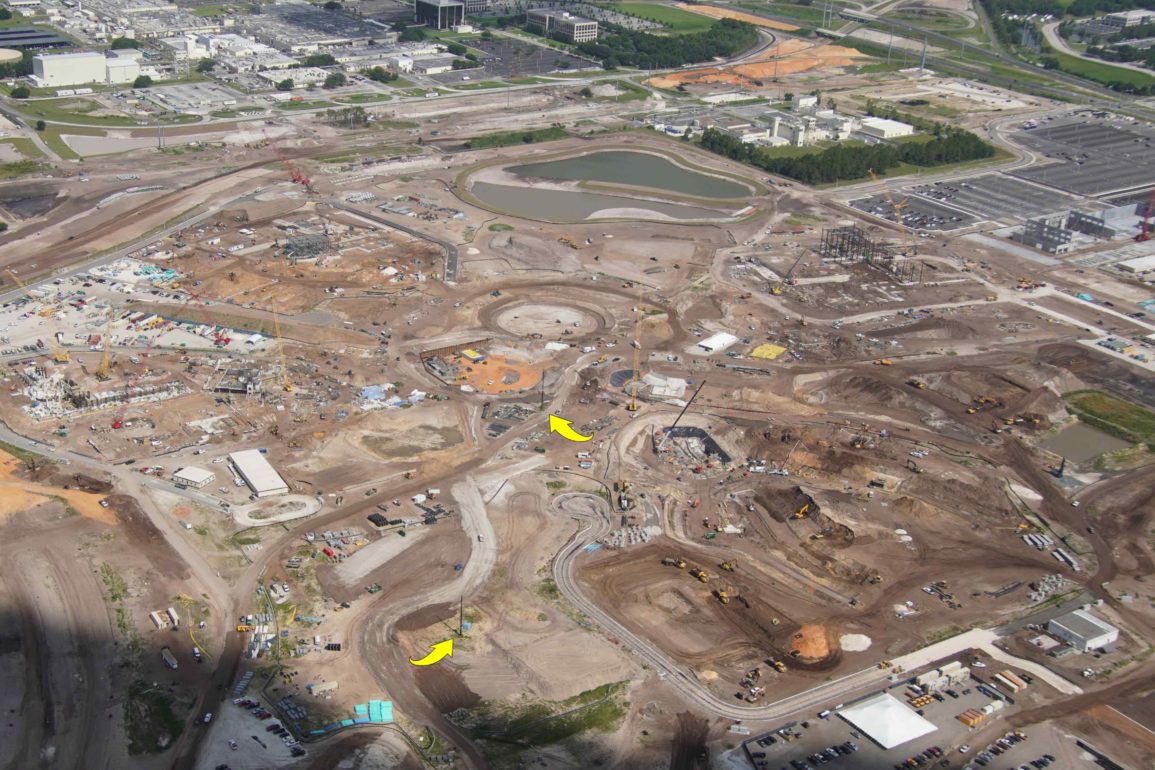 Bioreconstruct on Twitter has shared an intensive look at the construction of Universal’s Epic Universe, a new park at Universal Orlando Resort.

The reported lands include Super Nintendo World, a Classic Monsters land, a “How to Train Your Dragon” land, and a third Wizarding World of Harry Potter.

There are several cranes visible at the giant construction site.

Twitter user Tommy Hawkins has used one of bioreconstruct’s photos to create a visual layout of Epic Universe, including the attached hotel.

The bottom arrow in the photo above is the entrance to the park. The top arrow points at the approximate center. The large circle near the center will be a fountain, with the hotel between it and the lake at the back. The section of orange dirt next to the fountain site is a carousel in concept art.

Let’s take a closer look at each land.

Super Nintendo World is set to open early next year at Universal Studios Hollywood, before it comes to Orlando in the years after.

In the aerial photo above, the following attractions are numbered:

The Donkey Kong expansion has not yet been added to Super Nintendo World in Universal Studios Japan.

The arrows in these photos point to the beginnings of the Donkey Kong coaster track.

The foundation of the coaster creates an L shape.

The building at the bottom of the photo above is for Yoshi’s Adventure.

It has a couple of steel towers and several arched doorways.

Short walls create a rectangle around the Mario Kart site, which doesn’t seem as busy as the Donkey Kong coaster.

Check out our full tour of Super Nintendo World at Universal Studios Japan.

The Classic Monsters land will be between Super Nintendo World and Universal’s Grand Helios Hotel. It’s pictured to the right in the photo above.

A square steel structure rises from the center of the land.

There are a few short concrete walls and several trenches. The yellow arrows point to some small concrete structures. Two of them are circular, while the other two have a triangular shape.

Other small concrete structures are visible throughout the land.

How To Train Your Dragon

In addition to the “How to Train Your Dragon” land to the left, this photo shows the following:

Crews have excavated a lot of this area.

There’s an amphitheater shape near the center of the park, at the edge of the land.

The amphitheater already has a concrete foundation and crews were working on a grid of rebar.

More structures are in this ditch, including a tall wall and concrete foundation.

Several excavators were moving dirt elsewhere in the land.

The Wizarding World of Harry Potter

The steel structure in the foreground of this photo is the beginning of the Ministry of Magic ride. The buildings in the background are backstage.

A dirt road creates a rectangle around a large section of flat land.

The steel structure for the Ministry of Magic sits at the center of the rectangle.

What are you most excited to see at Universal’s Epic Universe? Let us know in the comments!