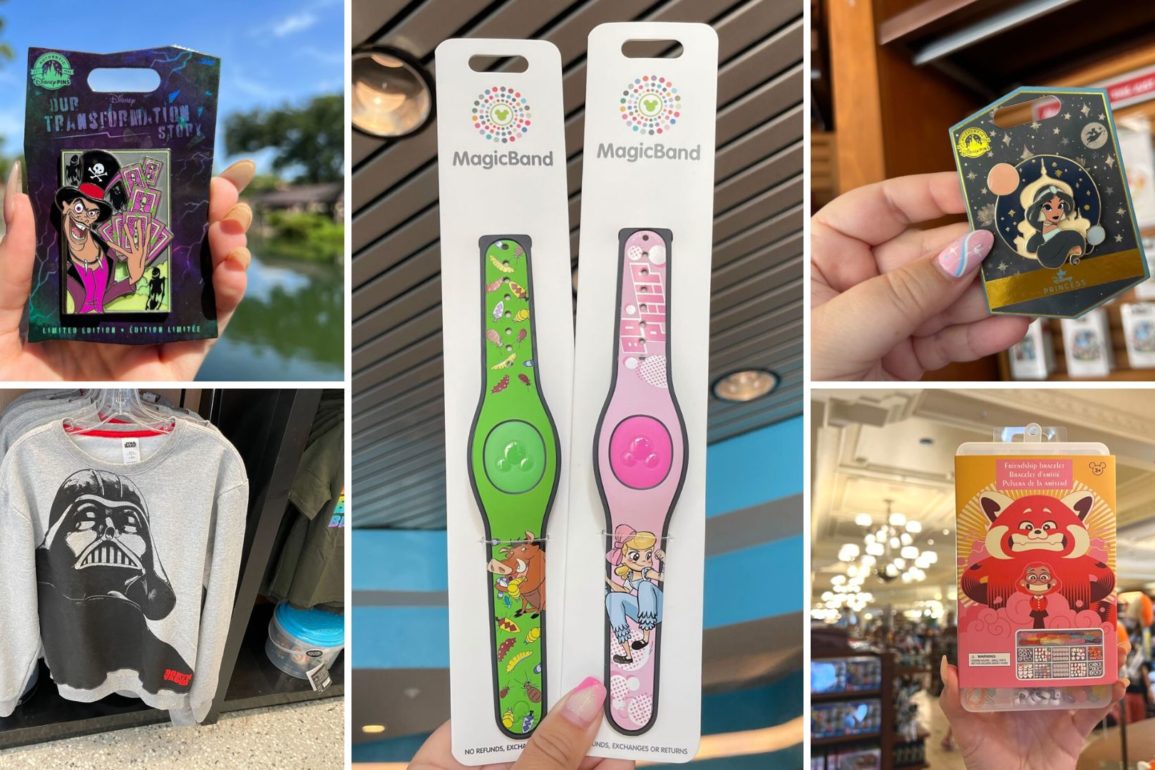 Welcome to the merchandise roundup for June 23, 2022! Each new day brings new merchandise to Walt Disney World, and we know you don’t want to miss a thing, so we gather new releases here. This week we visited Magic Kingdom, EPCOT, and Disney’s Hollywood Studios; let’s look at our discoveries.

We found these two new open edition MagicBands at Pin Traders in EPCOT.

This band is light pink, with a darker pink Mickey puck.

“Bo Peep” is in large letters with white polka dots on one end.

Bo Peep, in her blue jumpsuit, is on the other end.

This MagicBand is green, with Pumbaa enjoying some grub.

We found this MagicBand featuring Dante from “Coco” at the Emporium in Magic Kingdom.

It is purple with a teal green puck.

Dante is on one end, and his name is on the other.

Flowers, butterflies, music notes, and skulls are in the background.

These three character pens were in the Emporium.

Aladdin is wearing his purple vest, red fez, and white pants. Abu is on his shoulder.

His pants come to a point at the end of the pen.

Jasmine is wearing her classic teal outfit, and holding up the Genie’s golden lamp.

Ariel’s mermaid tail comes to a point for this pen.

She has her hands on her hips.

Channel your younger self with this friendship bracelet kit inspired by “Turning Red.”

It includes several different kinds of beads and colorful strings. There are even some “Turning Red” beads featuring Mei as a human and red panda.

This and the bottle below were in the Emporium.

This bottle comes in a red panda-inspired crossbody holder.

The holder resembles Mei as a red panda, but more pink than red.

Her plush tail sticks out of the back.

It has an adjustable purple strap with a buckle.

The bottle can be removed.

The bottle is a light transparent pink with a purple cap.

It’s covered with imagery from “Turning Red,” including Mei in her human and panda forms.

It reads “OMG” and features hearts, 4-Town CDs, and a boom box.

Mickey is embossed on the front.

“Walt Disney World” is embossed on the back.

This set includes five keychains shaped like Mickey’s iconic head, with different colored shorts on the bottom half.

The colors are red, blue, orange, teal, and yellow. Each has two white buttons.

Each keychain also has a charm resembling Mickey’s white glove.

The backs are silver.

This set and the one below were in Disney Traders in EPCOT.

These keychains are shaped like Minnie ear headbands. The ears are black, while each sparkly bow is a different color.

They are blue, green, yellow, red, and purple.

Two new Pride magnets are available in MaDe kiosks.

One reads “True to your <3.” The heart is a rainbow with a black Mickey head inside.

The second magnet reads “Belong, believe, be proud.” A rainbow stripe with a Mickey head is above “proud.”

This black band reads “Pride” on one side. The “D” is the Walt Disney “D” in a rainbow.

A Mickey head is in a rainbow heart on the other side of the band.

This was in Creations Shop, as was the pride shirt below.

This black tee features a rainbow ombre version of BB-8 with the words “Belong, believe, be proud.”

This heather grey sweatshirt features Darth Vader across the front.

His name is printed in red at the bottom of the sweatshirt.

It was also in Creations Shop.

This glow-in-the-dark keychain resembles Mjölnir, complete with blue lines where it was broken.

This was in Creations Shop.

This illustrated book follows Walt Disney’s animation journey from 1921 to 1968.

This was in Port of Entry at EPCOT.

This metal keychain has three charms attached to it.

The large charm is Buzz, pictured in teal, with orange and pink lines around him and “Star Command” above him.

A triangular charm also reads “Star Command” and shows a spaceship blasting off. The third charm is a circle and features Sox.

This and the “Lightyear” apparel below were in Disney & Co. at Disney’s Hollywood Studios.

This army green tee features a helmet on the front, with Buzz pictured in the background.

It has notes on the helmet, such as “Protective visor” and “Liquid cooling and ventilation garment.”

These army green cargo pants can be turned into shorts thanks to zippers at the knees.

They have large pockets and feature the Star Command logo.

This set has four pins of Donald, Mickey, Minnie, and Goofy wearing sunglasses. We found it and the Jasmine pin below at Sunset Ranch Pins and Souvenirs in Disney’s Hollywood Studios.

The actual pin is a circle with the silhouette of the Agrabah palace. Jasmine is pictured from her shoulders up, in front of the palace with her hair over her shoulder.

We found this second Jasmine pin in Boutiki at Disney’s Polynesian Village Resort. It comes on the same backing card featuring stars and flowers.

Jasmine is pictured kneeling in a cloud, holding the Genie’s magic lamp, in front of a starry circular background.

We found these next two pins at Tomorrowland Light & Power Co. in Magic Kingdom. Mickey and Minnie are featured in the relatively new animation style of the “Mickey Mouse” shorts.

Mickey is holding a camera on this pin.

This pin, part of the “Our Transformation Story” series, features Dr. Facilier holding a deck of cards.

It has a limited edition size of 2,750. We found it in Frontier Trading Post.

We found this “Floating Down Main Street, U.S.A.” pin at Frontier Trading Post too. Mickey is pictured atop a red hot air balloon. This has a limited edition size of 4,000.