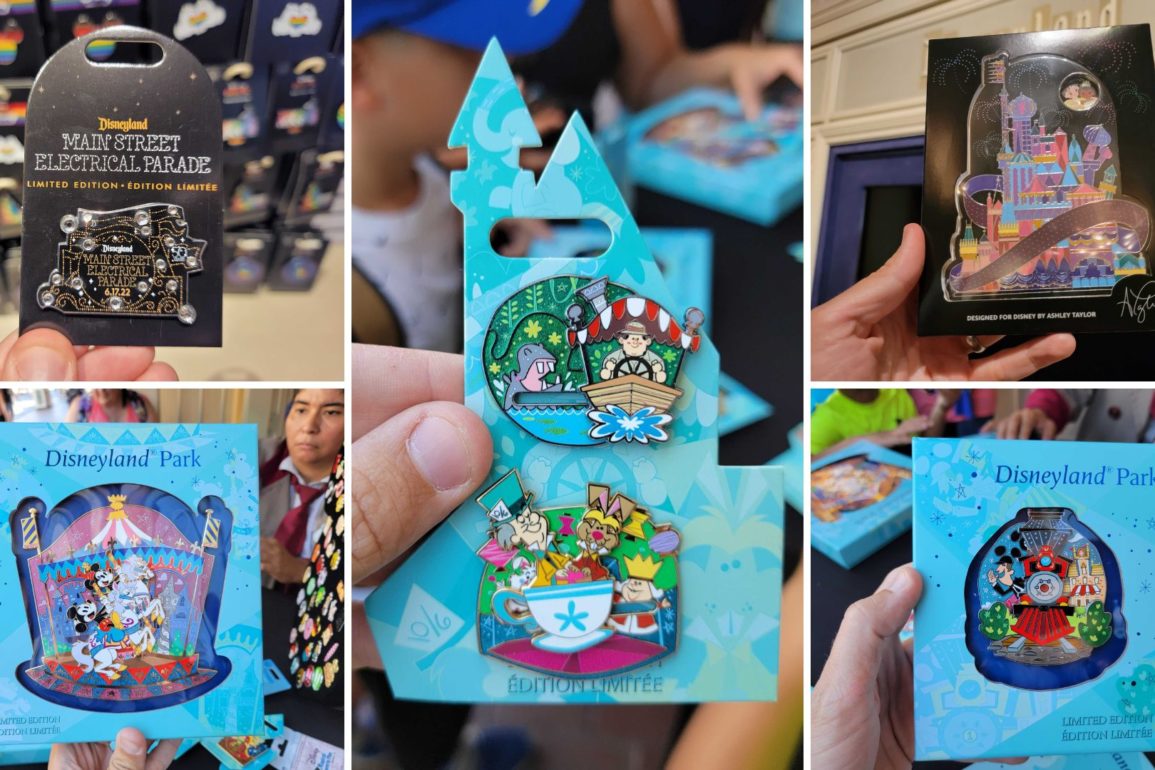 Several new pins, including an entire collection inspired by Disneyland lands and attractions, are now available at Disneyland Resort. We found all of these in 20th Century Music Co. on Main Street, U.S.A.

This set includes two pins representing New Orleans Square. One features Mama Odie from “The Princess and the Frog” in front of a New Orleans Square building. The other features a skeletal pirate leaning over a treasure chest from Pirates of the Caribbean. This set has a limited edition size of 800.

This jumbo pin features a red train engine of the Disneyland Railroad driving past Main Street, U.S.A. A person leans out of the train, wearing Mickey ears. It has a limited edition size of 750.

This pin is even more jumbo than the last, and features Mickey and Minnie riding King Arthur Carrousel. It has a limited edition size of 500.

This set, which also has a limited edition size of 500, includes three pins inspired by the three mountain attractions of Disneyland: Space Mountain, Big Thunder Mountain Railroad, and Matterhorn Bobsleds.

One of these mystery boxes includes two randomly selected pins. There are ten pins in the collection.

Each pin features a different magical character with a spinning mirror (or a similar object). Some of the characters include the Blue Fairy, the Enchantress from “Beauty and the Beast,” Maleficent, Merlin, Jafar, and Genie.

The next several pins come on backing cards inspired by the castle. This set includes a pin of Jiminy Cricket and Monstro the whale, as featured in Storybook Land Canal Boats. The second pin features the White Rabbit leaning out from behind a tree covered in confusing directions, as seen in Alice in Wonderland.

This set and the matching pins below all have limited edition sizes of 1,000.

This set includes a Jungle Cruise-inspired pin, with a skipper steering a boat past a hippo. The second pin has the Mad Hatter and March Hare in a blue teacup at Mad Tea Party.

This pin features Pooh bear floating away with a red balloon. He’s next to his “Mr. Sanders” tree house.

The door opens to reveal a pink Heffalump inside.

Tinker Bell slides across the corner of this pin, which also features Peter Pan steering the Jolly Roger pirate ship.

This pin resembles the gate entrance of The Haunted Mansion, with spooky trees and headstones to either side.

The gate opens and one of the singing busts is inside.

Fritz, one of the hosts of Enchanted Tiki Room, is on a spinner at the center of this pin.

A tiki god figure is on the other side of the spinner.

This pin features Sleeping Beauty Castle, with a starry sky behind it and royal banners to the sides.

Tinker bell flies up from behind the castle.

This pin resembles a travel poster featuring the Matterhorn Bobsleds.

Next up we have Main Street Electrical Parade pins. This one is black with golden dots and gems representing the parade’s lights. It resembles the drum-shaped float at the beginning of the parade, with “50 Years” on one of the flags.

This jumbo pin is designed by Ashley Taylor, who recently released an art collection inspired by the updated Main Street Electrical Parade finale float. The jumbo pin is a colorful rendition of the castle section of the float. Tiana and Naveen peek out of a window at the top of the pin. It has a limited edition size of 3,000.

Finally, this simple pin resembles the classic Marvel logo, but with a sparkly ombre rainbow background instead of solid red. It is part of the Disney Pride Collection.

Which of these pins will you add to your collection? Let us know in the comments below!