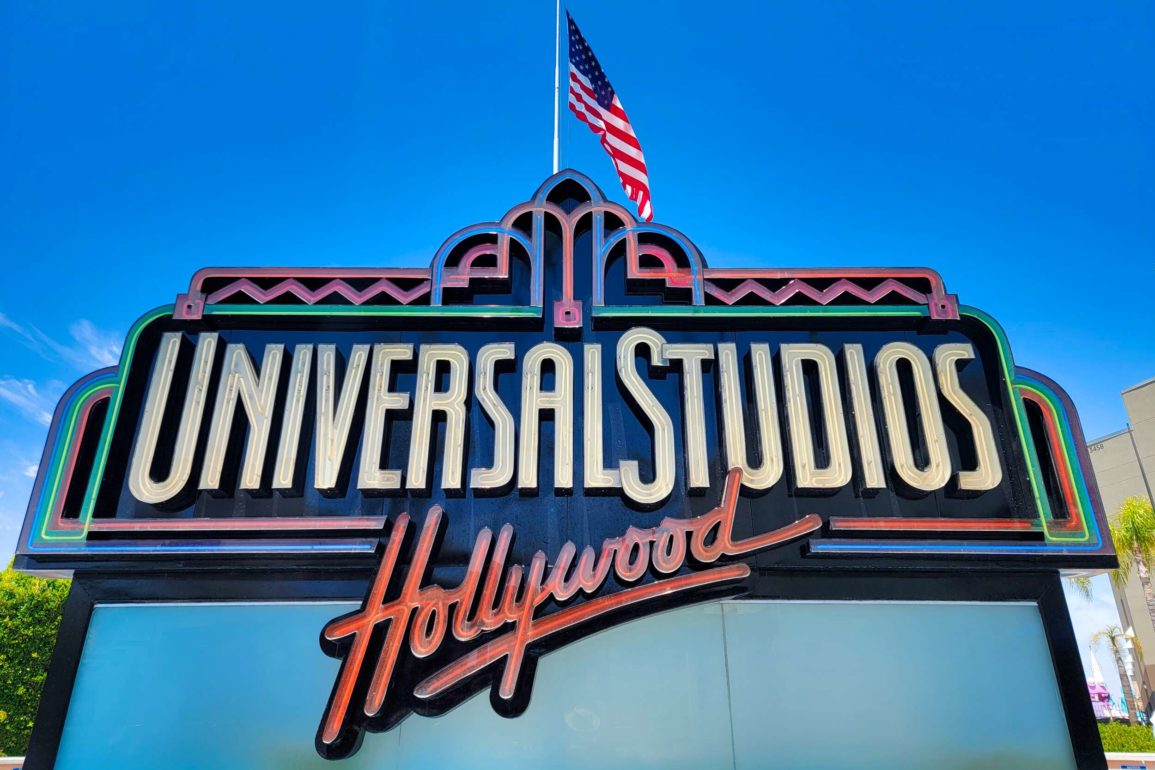 Construction at Toothsome Chocolate Emporium is coming along nicely.

The towers are now taller than the building, as seen from way away.

Over at the Curious George parking lot, the Halloween Horror Nights mazes are looking good as well.

We noticed some set decoration out front being worked on, including this wagon and a well.

The other maze in the parking lot is coming along as well, though it is harder to see its façade.

Previously, the window was covered with a repeating pattern of the names of the sandwiches. Now it has been cleaned up a bit to be just the chicken mascot and the heat levels.

We found this new Hagrid light up umbrella toy in the Studios Store, Upper Lot. It illuminates with the swish of the umbrella.

Adding to the already massive collection of new E.T. 40th anniversary merchandise, we found a few more items that have recently hit shelves in the parks, including this patch keychain and the below spoon.

For any fans of those yellow, babbling balls of inane comedy, a new Minion in sunglasses popcorn bucket has come to the park.

And unlike some other parks’ popcorn bucket releases, there are plenty of these to go around both in the shops and at popcorn stands.

When we stopped by the popcorn stand, we noticed that anyone not eating their popcorn from inside a Minion’s head was given a new style of popcorn cup. These debuted at Universal Orlando Resort recently and have now made their way out to the West Coast.

The Chocolate Coca-Cola Float has become a Pass Member Exclusive offering for June. We had a chance to try it recently, and you can see our full video review on our YouTube channel, or by clicking on the video below:

HHN construction at the Parisian Courtyard seems to be moving into detail work for the façade.

Ok, serious question time. See that chimney smoking up there? It’s 90° out right now in LA. Who has their fireplace going? Who is so cold inside Wiseacres Wizarding Equipment that they need a fire? Or maybe they forgot to turn on the AC and some of the wands just burst into flame from the ambient heat and that’s the smoke escaping. That’s probably it.

It sure is a warm day today. And the classic LA smog has settled in deeply.

Super Nintendo World construction has received some new thematic elements with the addition of the colorful bricks on the ledge. Work still continues on the façade of Bowsers castle, future home of the Mario Kart attraction that we recently got a look at.

It was recently announced that the new land will be opening in early 2023, and the construction walls are in the process of being updated to likely reflect that addition. The sun has baked the previous date into the background, so it can still be seen despite the decals being removed.

Nothing is better on a hot day than a water ride.

Parts of this ride are so peaceful. You know, when you aren’t being attacked by dinosaurs.

Upstairs at Jurassic Café, a Team Member appreciation event was being held. Universal does have some really great Team Members, and we are also grateful for their kindness and level of service.