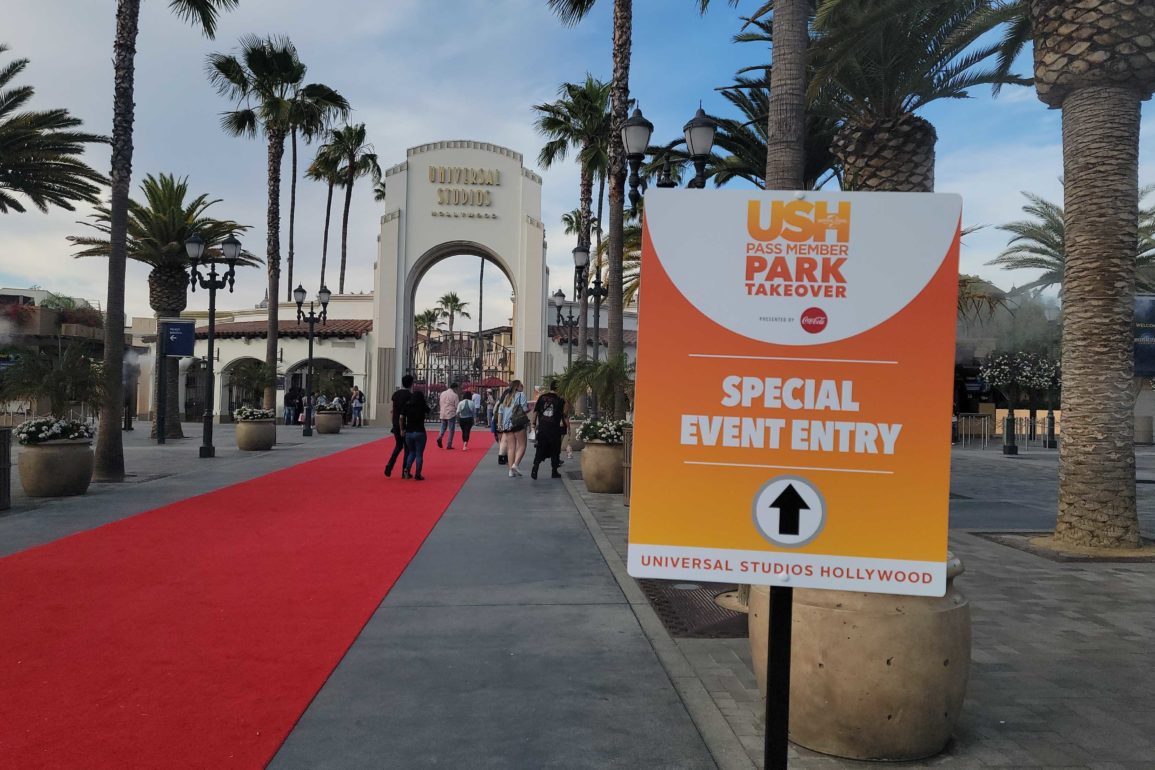 Pass Members got to take over Universal Studios Hollywood on the evening of June 9 from 8:00 p.m. to midnight.

Parking for Pass Members was free through the entire night, instead of just until 6:00 p.m.

There was a special entrance for Pass Members to pick up a badge.

Pass Members could still enjoy the park before 8:00 p.m. as usual.

A Pass Member-exclusive chocolate float is available for the month of June at Mel’s Diner. It’s supposed to be “secret,” but there are signs everywhere. Check out our review here.

The party started at 8:00 p.m. Projections welcoming Pass Members were on the entrance archway.

This was a fun nighttime event for Pass Members to have their run of the park.

In addition to the normal offerings of attractions and select shops and restaurants, Universal Plaza was taken over by the Coke Party zone which featured dueling DJs, lawn games, and free samples of Coca-Cola starlight.

The DJs weren’t really dueling; they were just DJs hyping each other up, but the music was loud and it didn’t stop for four hours.

There was a green screen photo-op.

There was also a DJ set up in the lower lot, in front of Jurassic World the Ride. We waited about 20 minutes in the Single Rider line to ride. The park seemed less crowded than daytime but there were also less Team Members, so it didn’t have much of an effect on the wait times.

That said, beyond the two DJ stations, the Coca-Cola starlight samples, and the lawn games, it was just a regular visit to the park. There was no special entertainment, characters, or additions to attractions. While DJs aren’t really our thing, they did add to the unique nighttime experience. Halloween Horror Nights visitors will likely attest that there’s just something different about the park at night, and while this wasn’t quite the same energy, it had a similar effect.

The tram tour was busy with a 90 minute wait, but there was nothing different about the ride. However, it does make for a nice change of pace, and the lighting enhances the experience.

The Bates Motel is always a little spooky, but there’s something particularly unsettling about it at night.

It would have been nice to see some unique character sightings or have a special show, something to warrant clambering for the reservation and staying late at the park. That being said, it was still an enjoyable trip to Universal Studios Hollywood, it was an extra perk for Pass Members, and a free Coke is always welcome. We’d love to see them do it again sometime.