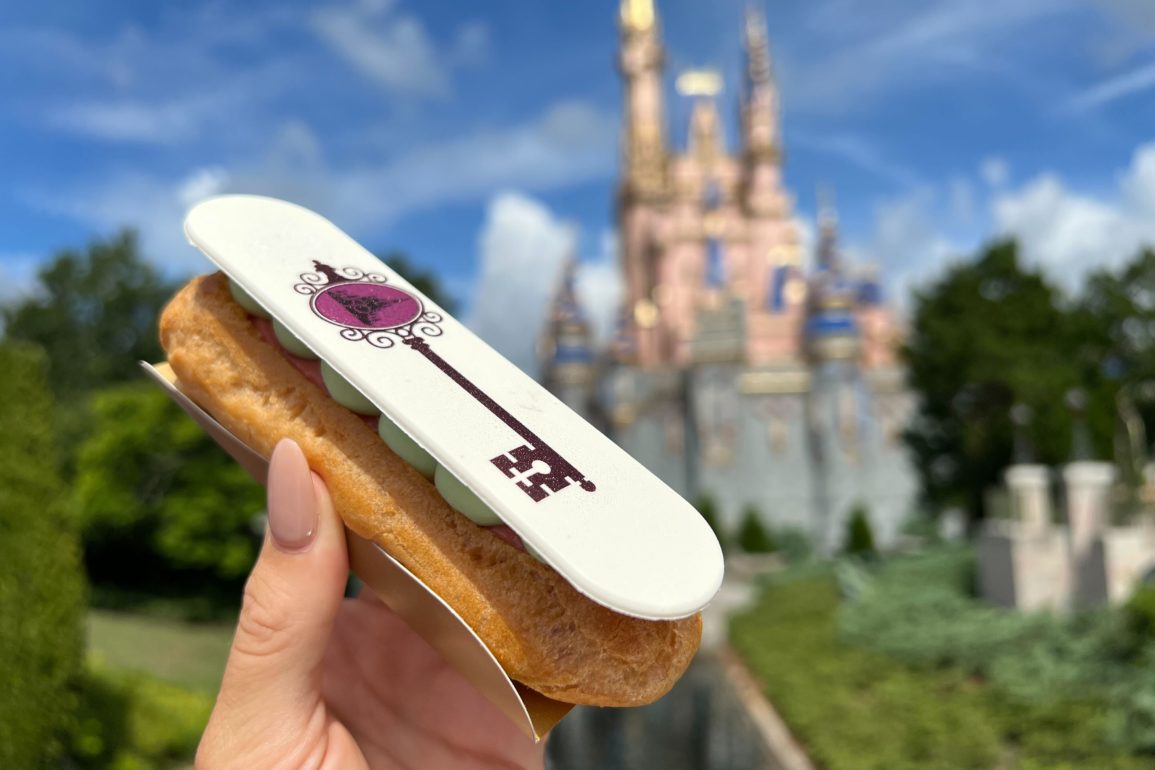 We hopped over to Magic Kingdom to try the newest addition to the Walt Disney World 50th Anniversary foods — the Magic Kingdom Club Éclair.

This treat calls back to a loyalty program designed by Disney in the late 1950s called Magic Kingdom Club, originally used at Disneyland. The program offered special discounts, rewards, and other related benefits. When Walt Disney World opened in 1971, the program was offered there as well. The Magic Kingdom club disbanded in 2000. The image on the chocolate is the Magic Kingdom Club logo often found on coupons, tickets, and more.

This reminded us of a dessert you’d find in Amorette’s Patisserie over at Disney Springs. There is plenty of filling and lots of fruity flavors.

The green panna cotta tasted exactly like Key lime pie, but it seemed to overpower the strawberry. The strawberry had a bit of artificial sweetness to it that we didn’t quite like.

While the flavors definitely reminded us of summer, the heavy filling makes it a difficult snack to eat in the Florida heat. The chocolate piece on the top instantly started sweating, and the thick fillings were a bit much. The outer puff pastry was crisp but otherwise nothing new.

All in all, the flavors were decent, but there was nothing particularly special about the dessert. We’d rather stop by the Main Street Bakery for the Opening Day Celebration Cake.

A good choice for an on-the-go snack this summer? Or is the lack of a wow factor not worth the price? Let us know what you think of this dessert in the comments below.

WATCH PARKSCENTER — Goodbye to Bob Iger, a Look Ahead at 2022, and a Preview of the Festival of the ...January 9, 2022
New Reforged Asajj Ventress Legacy Lightsaber Hilt Available at Dok-Ondar's in DisneylandMay 4, 2022
PHOTOS: New Disney Vacation Club Photo Frame and Drink Holders at Disney's Riviera ResortJanuary 22, 2022