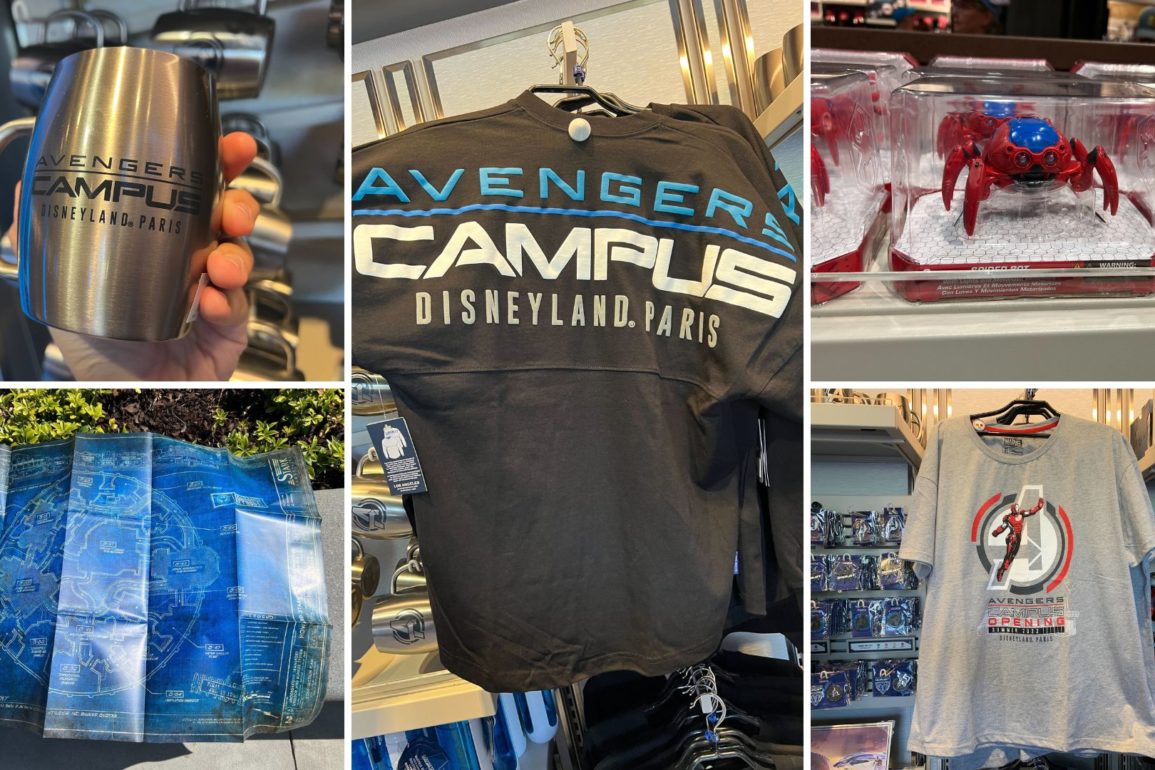 Every Piece of Avengers Campus Merchandise at Disneyland Paris With Prices

Heading to Avengers Campus at Walt Disney Studios Park in Paris? Check out our guide to every piece of merchandise available during Annual Passholder previews.

This shirt features Iron Man over the Avengers Campus “A” logo.

This mug features the same logo against a black background.

“Avengers Campus opening summer 2022 Disneyland Paris” is on the other side.

Colors appear when a hot drink is poured into the mug.

Spider-Bots originated at Avengers Campus in Disney California Adventure. In addition to the actual bot, users can purchase tactical upgrades.

The remote control bot is red and blue.

The Black Widow tactical upgrade is all black and silver.

The Black Panther upgrade is also black but with purple touches.

The Iron Man upgrade is red and gold.

These bots are a little smaller than the remote control ones.

Power Bands can be used during Spider-Man W.E.B. Adventure.

A basic band is black and white.

The web shooter can be attached.

Users can also attach a repulsor inspired by Iron Man.

The mystic amplifier is inspired by Dr. Strange.

The Spirit Jersey is black, with the “A” logo in white and blue on the left breast.

“Avengers Campus Disneyland Paris” is in blue, white, and gray lettering on the back.

This white tee features a Spider-Bot being scanned for diagnostics.

A process log for the bot is on the back.

An “Expert Web Slinger” emblem is on the left sleeve.

This matching hoodie is heather gray, with black zip pockets. The Spider-Bot and diagnostics are on the front.

“Worldwide Engineering Brigade” is on black stripes on the sleeves.

The inside of the hood is red.

This heather gray tee features a black image of Spider-Man on the front with blue drawings pointing out details and formulas.

The same black stripe is on this shirt’s sleeves.

This shirt includes blue shorts with the W.E.B. logo in white.

The words are surrounded by scientific and Spider-Man drawings.

These images continue onto the back of the shirt.

This tee is black. Spider-Man is in a square on the front reading “Identified: Spider-Man.”

The Flight Force logo is on the left sleeve.

This tee is black, with a grey triangular panel across the front. The “A” logo is on the left breast.

Another grey panel is on the back.

This heather gray tee has a blue diagonal stripe across the front. The Avengers logo is in the center.

The back and one sleeve are blue.

This youth tee is dark blue and features a large image of Captain Marvel.

The Flight Force logo is on one sleeve.

This similar tee is black and features Iron Man.

This sweatshirt is blue and features both Captain Marvel and Iron Man.

This simple sweatshirt is heather gray, with “Stark Industries Science & Technology Intern” across the front.

The words are on an embroidered patch.

This tee features the W.E.B. logo in red at the center.

This tee is light gray with a black stripe across the center. The Avengers logo is on the left.

This zip-up hoodie is black with the “A” logo in light grey on the left breast. There are grey stripes on the sleeves.

“Avengers Campus Disneyland Paris” is on the back.

This hoodie is light blue with the Avengers Assemble Flight Force logo on the front. The logo is circular, with an image of space in the background and the attraction’s name across the foreground.

This adult tee is blue and features Captain Marvel in a rectangle on the front.

The Flight Force logo is on the left sleeve.

These are grey with a blue waistband. “Avengers Campus” is repeated in white on the waistband.

This ball cap is blue. A patch on the front depicts Spider-Man with headphones on.

“Worldwide Engineering Brigade WEB” is embroidered on the back.

This backpack has a web pattern, with one giant plastic web on the front.

The W.E.B. logo is on a rubber patch at the corner.

This lanyard is double-sided. One side is blue with an all-over pattern of the W.E.B. logo. The other is red and features Spider-Man himself. The badge at the bottom is for a visitor to the Paris open house of W.E.B.

One side of this bucket hat is solid red with the W.E.B. logo and “Genius” in white. The other side is white with an all-over red and blue pattern of various W.E.B.-related symbols.

The Avengers logo is in white and blue on the front.

This billfold is black. “Avengers Campus Disneyland Paris” is on the other side.

Inside, there are several card slots.

This duffel bag is grey, with the Avengers logo and “Avengers Campus Disneyland Paris” on one side. The straps are black.

“Quinjet Flight Crew” is on the front of this messenger bag, along with images of the Quinjet.

The bag buckles closed but also has a zip pocket on the back.

The inside includes a padded slot for a laptop.

This backpack is black and grey. The “A” logo is debossed on the foam front. “Avengers Campus Disneyland Paris” is below the logo. There is a front zip pocket and two side pockets.

The main pocket also zips up.

This badge is a glowing image of the Avengers logo.

Instructions for attaching it to your shirt or bag are on the packaging.

This set includes four pins. One says “Web Slinger” around a black spider. One is just Spider-Man’s face. Another reads “Web Shooters Activated” around an image of Spider-Man’s hand. The last is an “Expert Web Slinger” badge.

This pin depicts a Spider-Bot and reads “S.P.D.R. BOT” along the bottom.

Spider-Man is about to shoot some webs on this pin. The background is made up of blue hexagons.

This pin reads “Brain Power = Super Power” below the W.E.B. logo. It’s white with a red and blue design.

This pin features the W.E.B. logo and “Genius” made up of elements from the periodic table. It’s red with white lettering.

Spidey is swinging across the dark façade of the W.E.B. building on this pin.

This pin features a blueprint of the Quinjet in the background of a silver image of the plane. “Quinjet” is in white lettering across the front.

This pin is the Avengers Campus logo in silver with a blue border.

This set includes two pins. One is a Quinjet flight crew badge. The other resembles a silver coin featuring the Quinjet. “Avengers Campus Disneyland Paris” is on the other side.

This blue photo frame magnet has Spidey swinging across the top left corner. Hexagons are on the edges in black, and the W.E.B. logo is in red at the bottom left corner.

This blue mug resembles a beaker. The W.E.B. logo is in white on one side, with “Labs” spelled out with elements of the periodic table below.

The other side reads “Paris Workshop” and “Invent, Empower.”

This bottle is red with a black web design. A black spider is on one side.

This set includes four beaker-shaped glasses. Two are wide and feature a Vibranium logo and Pym Particles logo. The other two have a triangular shape. One features Iron Man’s arc reactor on a Palladium sticker and the other features Thor’s hammer representing the fictional element Uru.

This white stoneware tumbler reads “Brain Power = Super Power” in red and grey lettering. The W.E.B. logo is in red above the words. “W.E.B.” and the logo are in gray on the other side.

The lid is red.

This stainless steel mug features the Avengers logo in black on one side.

“Avengers Campus Disneyland Paris” is on the other side.

This bottle has a white handle. The sides are translucent blue plastic. One side reads “Avengers Campus.”

The other features the “A” logo.

This placemat is black with diagnostics of the Spider-Bot in red and blue.

This notebook is black and covered with subtle superhero symbols. The Avengers logo is the largest, in white and black on the front.

This cardboard frame is silver-grey, meant to resemble metal. It has blue accents, and reads “Avengers Assemble Flight Force” across the bottom.

A stand pops out of the back.

One of these file folders is stamped with the SSR logo and “Top Secret.”

Project designer Howard Stark is listed on the back, alongside supervising project commander Agent Carter. There are more approval and date stamps. The planning commission stamp date references the day Walt Disney founded WED Enterprises. The final approval date of July 17, 1955, is the day Disneyland opened.

Inside is a blueprint of Avengers Campus. This same blueprint can be seen in the queue for Spider-Man W.E.B. Adventures — take a closer look here.

This is a hardcover comic book about Spider-Man and W.E.B.

The Royal Talon Fighter plane was used by the King of Wakanda.

The model includes a stand with the Black Panther logo.

This bobble-head Funko POP! depicts Spidey with a Spider-Bot.

This white mug has the W.E.B. logo in a spray-paint style. Spidey swings across the logo on a web.

A logo for an “Expert Web Slinger” is on the other side.

The interior is blue, with the W.E.B. logo at the bottom.

This red bowl has the W.E.B. logo in white on one side and Spider-Man on the other.

The inside is white.

The keychain is red on one side with the W.E.B. logo in white.

The other side reads “Web Slinger Expert” with a logo of Spidey’s hand wearing a web shooter.

This metal sign resembles a blueprint for the Quinjet.

You can also get a Quinjet die cast model, including an Avengers-branded stand.

Finally, this die cast model is of the Avengers Deployment Vehicle, which transports superheroes around Avengers Campus.

Next
Disney On Broadway VR Experience Returning to D23 Expo 2022