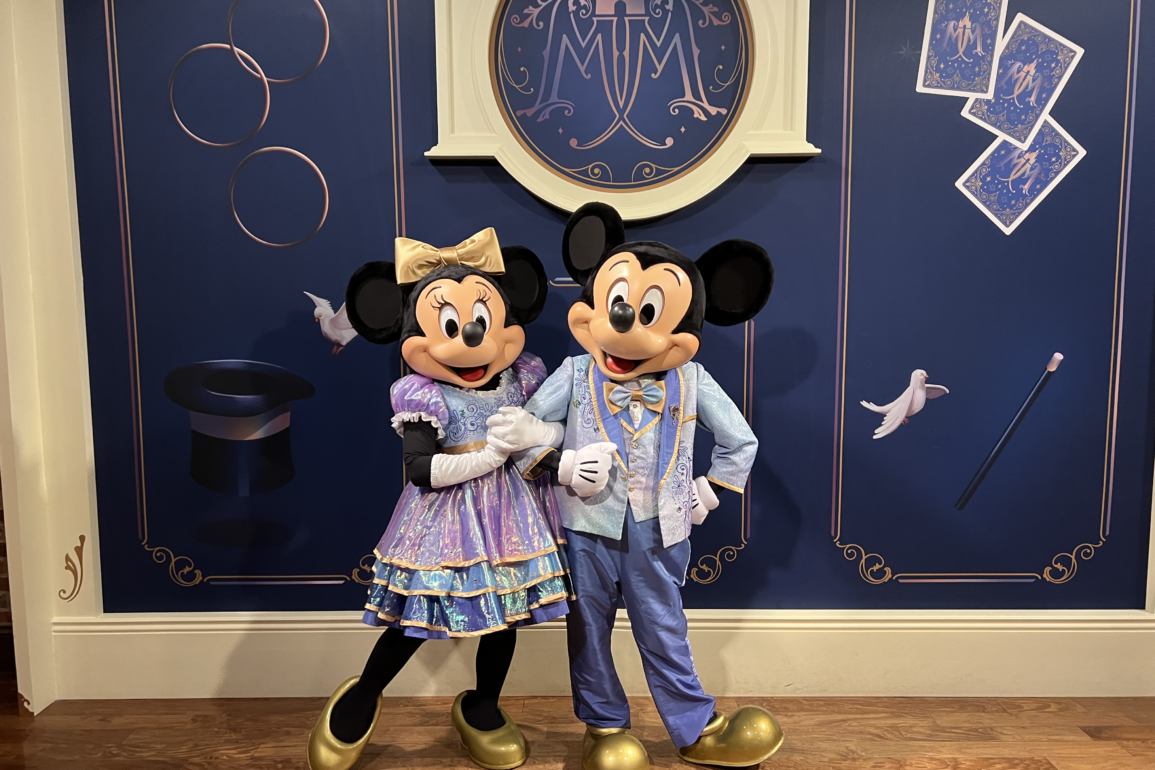 Good Morning from Magic Kingdom! We’re excited to see Minnie Mouse at Town Square Theater greeting guests today. As always, we will be on the hunt for all things new. We hope you enjoy following along.

Luckily we had no wait and went right in to meet them. Minnie Mouse and Mickey Mouse were sporting their 50th anniversary costumes. There are no Photopass photographers present, just automated Photopass cameras.

It’s the first Wednesday of the month which means new Wishables are released today. For the month of July, you will find Pinocchio’s Daring Journey Series. Jiminy Cricket was available for purchase outside of the mystery bags. These mystery bags were found in The Emporium in Magic Kingdom.

More bricks have been added to the Center Street construction.

In the display at Uptown Jewelers is the new Dooney & Bourke “Winnie the Pooh” collection. This collection will be released July 7.

On the MaDe kiosk, in Light & Power, there are new Annual Passholder Orange Bird phone cases.

In Plaza del Sol Caribe Bazaar, there was a new Pirates of the Caribbean windbreaker jacket.

We decided to hop over to Disney’s Contemporary Resort and check out if they had any new merchandise. There was a restock of the 50th Anniversary Jeweled ear headband and ear hat in Bayview Gifts.

In Bayview Gifts in the Contemporary, there was also a new watercolor Walt Disney World jacket featuring Cinderella Castle on the front.

In Fantasia Market in the Contemporary, there were two limited release pins featuring a Jawa and a Tusken Raider.

Next, we park hopped to Disney’s Hollywood Studios to see what was new here.

Woody’s Lunchbox had a new Chicken Salad Sandwich on the menu.

In Dok-Ondar’s Den of Antiquities, Dok-Ondar’s Mystery Treasure sets are available. Each set includes one treasure.

In Tower Hotel Gifts, there were plenty of new glow in the dark Loungefly Tower of Terror ears.

In Celebrity 5 & 10 there was a new 50th Anniversary suitcase. This piece of luggage features Cinderella Castle and many of our favorite characters to celebrate the 50th anniversary.

We had a great day today checking out new merchandise, food, and Minnie with Mickey in Town Square Theater. Thanks for following along with our day!

Get 'Fired Up' With a New 'Inside Out' Bottle From Disneyland ResortApril 15, 2022
Disney Cruise Line Trip Cancellation Coverage Increasing to $20,000 Per PersonMay 19, 2022
Arc Reactor Tiles Covered at Avengers Campus in Disney California AdventureJune 30, 2022