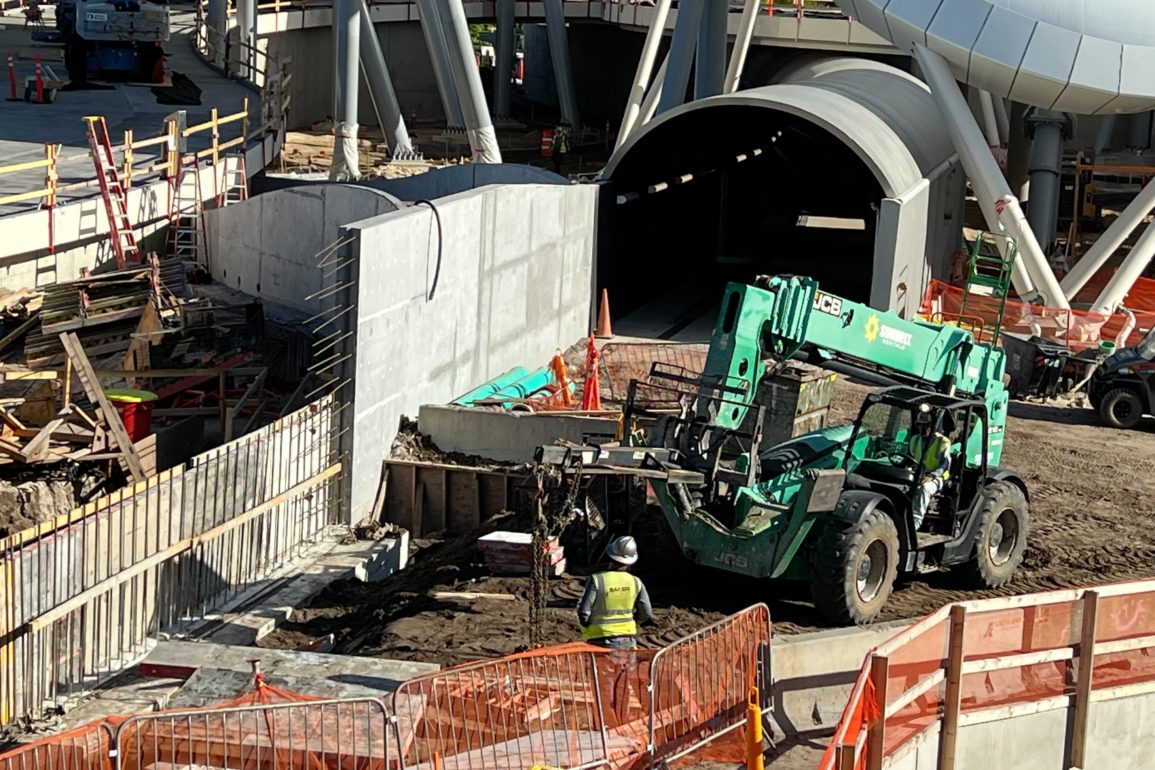 The first train track rails have been installed in the Walt Disney World Railroad tunnel beneath TRON Lightcycle / Run at Magic Kingdom. The railroad has been closed since late 2018 to make way for the construction of the new coaster in Tomorrowland.

The coaster’s track and exterior canopy have been completed. The coaster is partially indoors and partially outdoors.

The construction site is visible from the Tomorrowland Transit Authority PeopleMover.

There are several concrete walls and planters in the dirt near Tomorrowland Speedway.

A second walkway is under construction below the first. It will lead to Storybook Circus.

The foundation of the second walkway is visible beyond the construction vehicles.

The first walkway leads to a lockers building and then to the entrance of the attraction.

Crews have been working on walls that will separate the walkway from the backstage area.

The walls are still mostly rebar and wood.

Beyond the walls is the Walt Disney World Railroad tunnel.

The tunnel has a curved roof. It runs beneath the canopy, coaster, and walkway.

One of the new walls runs from the side of the tunnel underneath the PeopleMover track.

Cylindrical lights are on the walls inside the tunnel.

The track rails (the long edges of the tracks) are just inside the tunnel. The area outside of the tunnel is still under construction.

The track rails aren’t very visible during the day, but you can just barely see one in our brightened photo below.

Crews have been testing TRON Lightcycle / Run vehicles, but we didn’t see any today. We did see a large red panel on the ground.

And there’s a large pile of dirt between TRON Lightcycle / Run and Space Mountain.

Crews have installed translucent white pieces on the white supports leading up to the attraction’s entrance.

Crew members in scissor lifts were working on the entrance area today.

There are silvery themed elements around the entrance doors.

Some construction is also visible from Storybook Circus.

Crews have installed silver-grey and white paneling on the entrance to the lockers.

There’s a roof overhang and a rectangular archway.

A wire hangs from the overhang, probably for a future sign.

Outside the Fantasyland Station, we could see some crew members working on the tracks.

A service train was moving back and forth.

There is no announced opening date for Walt Disney World Railroad or TRON Lightcycle / Run at Magic Kingdom.