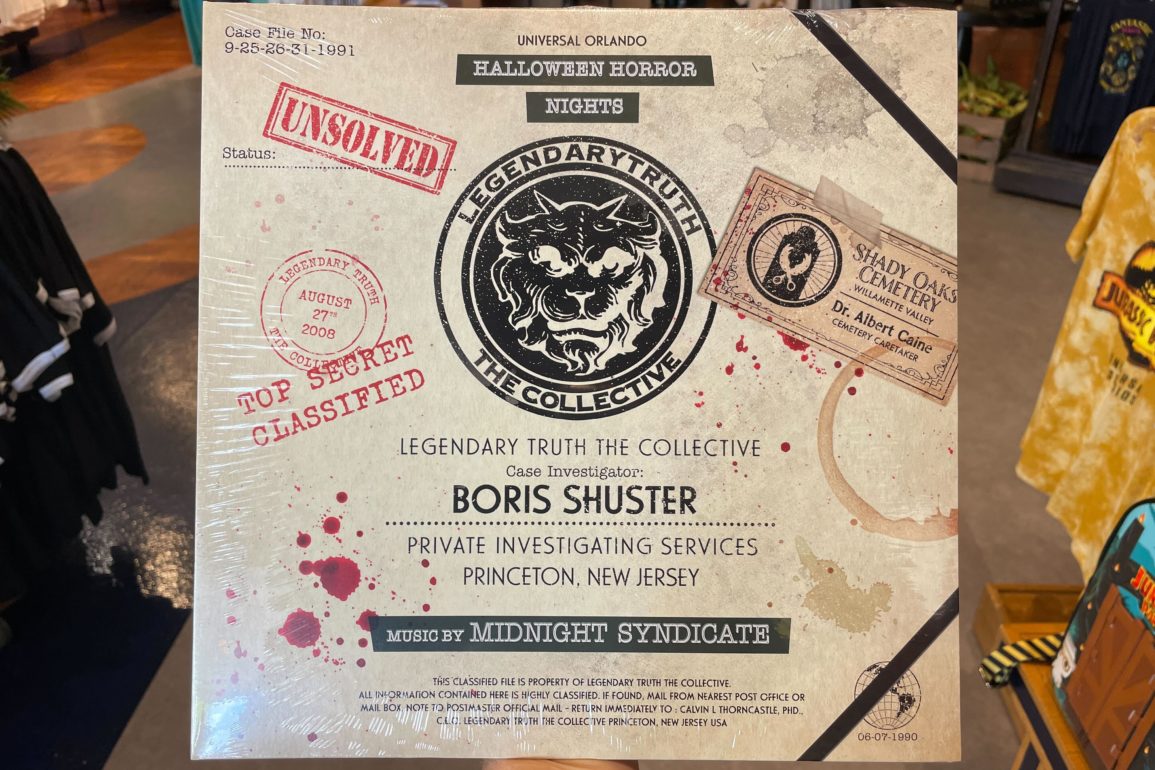 The haunting sounds of Midnight Syndicate have returned with a new album inspired by “Legendary Truth: The Collective” for Halloween Horror Nights 31 at Universal Studios Florida.

Revealed earlier today, the album art is chock full of references to Halloween Horror Nights icons of the past and Legendary Truth’s own history.

The 2008 stamp references the year that the paranormal investigative group was introduced to the event to investigate Bloody Mary.

The case file erroneously references the dates of the very first event in 1991, then dubbed “Fright Nights.” It was held on October 25, 26, and 31 of that year, but the album uses a 9 instead of a 10.

The legal lingo on the bottom of the front cover references Legendary Truth founder Boris Shuster and CEO Calvin Thorncastle.

A card on the right hand side advertises Dr. Albert Caine, better known to HHN fans as The Caretaker.

The reverse side of the cover has even more references to discover.

A coaster for the Kitty Kat Club can be seen. It served as a location in last year’s house, Case Files Unearthed: Legendary Truth and the façade can be seen on Delancey Street in the New York area of Universal Studios Florida.

There’s also an audition call from Paulo Ravinski, also known as The Director.

There’s also an article about the shutdown of Shadybrook Asylum, famously seen throughout the “PsychoScareapy” series of houses. It first debuted in 2003. To the left, there’s a half-scrawled note with the symbol of the Strengoit legion.

Below that, there’s a note asking for the whereabouts of Cindy Caine, the Caretaker’s daughter. To the right, there’s an advertisement for Elizabeth Strict, the Storyteller, recounting the tale of “Terra Cruentus,” which debuted in 2005.

The album is only available in limited quantities. The exact edition size is unclear, though it’s believed to be 2,000. Each album is individually numbered next to the bar code.

On the right is the track list. Side A has tracks for each of the six Legions of Horror:

Side B consists of Shuster’s case files.

Given how popular these albums are, they’re likely to sell out very quickly. But if you can’t make it to the park, the album is available on the Universal Orlando online store as of the writing of this article.

Are you a fan of Midnight Syndicate? What Halloween Horror Nights music would you like to take home? Share your thoughts in the comments!