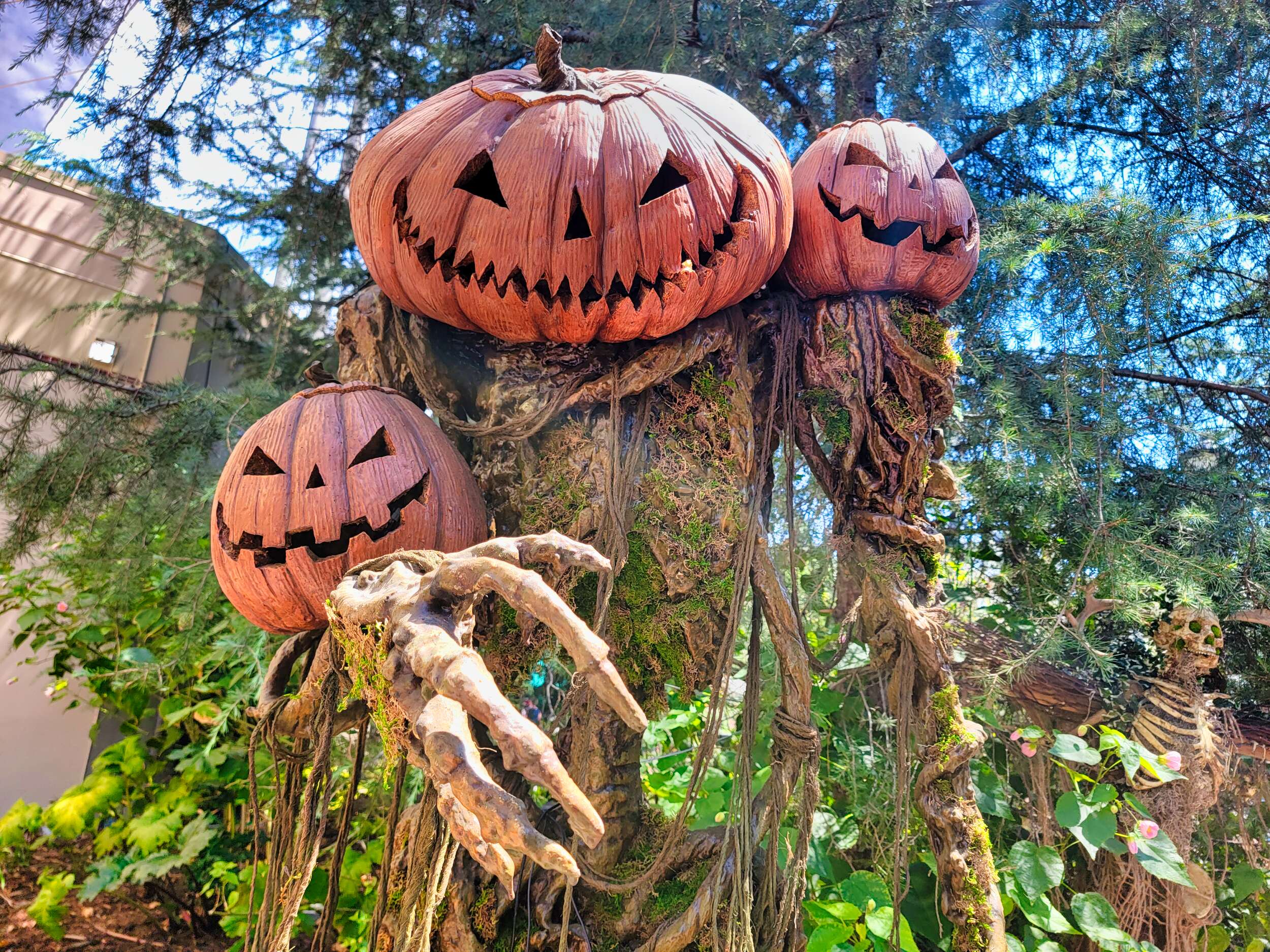 Pass Member Appreciation Days starts today, so we came out to take advantage of all the offers extended to us. This flyer was given to us at the parking booth, with listings of everything we can expect.

As part of the USH Pass Member Appreciation Days, Voodoo Doughnut has a secret menu item exclusively for Pass Members — the Churro Doughnut. We got one and have your full review right here.

In front of the gate, a sign warns us of all the horrors awaiting inside as they prepare for Halloween Horror Nights.

The Dia de Los Muertos area inside Universal Plaza is beginning to be installed ahead of the event.

And there are plenty of other spookables throughout the park, like this Haunted Forest display outside of the Animal Actors Studio show.

This set looks amazing already. We can’t wait for HHN to open so we can see this under show conditions.

The sets for El Pueblo del Terror are set up along French Street, near the exit of the upcoming La Llorona house.

Each of the frames features a cover from the fictional “Historias de Terror y Muerta” pulp magazine that has one of several traditional folktale monsters of Mexico and Central America.

There is also this gargoyle sign for the Minion Café, which might be the best set decoration that the Café has ever had.

We stopped into the Studio Store to pick up our complimentary Minion Magnet, declaring our fealty as a Pass Member. And, of course, we had to come take some pictures at Super Silly Fun Land.

Another perk for USH Pass Member Appreciation Days is free wand engraving for Pass Members at Ollivander’s in the Wizarding World of Harry Potter. We got the new Dumbledore wand from the “Fantastic Beasts and Where to Find Them” series and had it engraved along the shaft of the wand.

The engraving is done in a flat (undecorated) part of the wand, and the exterior is scraped off to reveal the white plastic underneath. Our reporter chose to engrave his social media name in this wand, but it can be customized to any message.

Super Nintendo World is relatively unchanged since our last check-in. The blue wall being painted continues to grow, but that is about it.

We found a new tiki cup available at Isla Nu Bar, the first themed tiki cup exclusively for the bar.

The design features several Velociraptors running around the cup, with the Jurassic Park/Jurassic World logo at the bottom and palm fronds running along the top.

Even without the themed cup, we stopped in to have a couple of new Jurassic cocktails now available at Jurassic Café.

You can see our full video review of both cocktails on our YouTube channel, or by clicking the video below:

Our Martini Shot of the day is a look back at our favorite monster from the Haunted Forest. This pumpkin man was hung at the front of the park for the 2019 season, and we are glad to see him come back for another year.