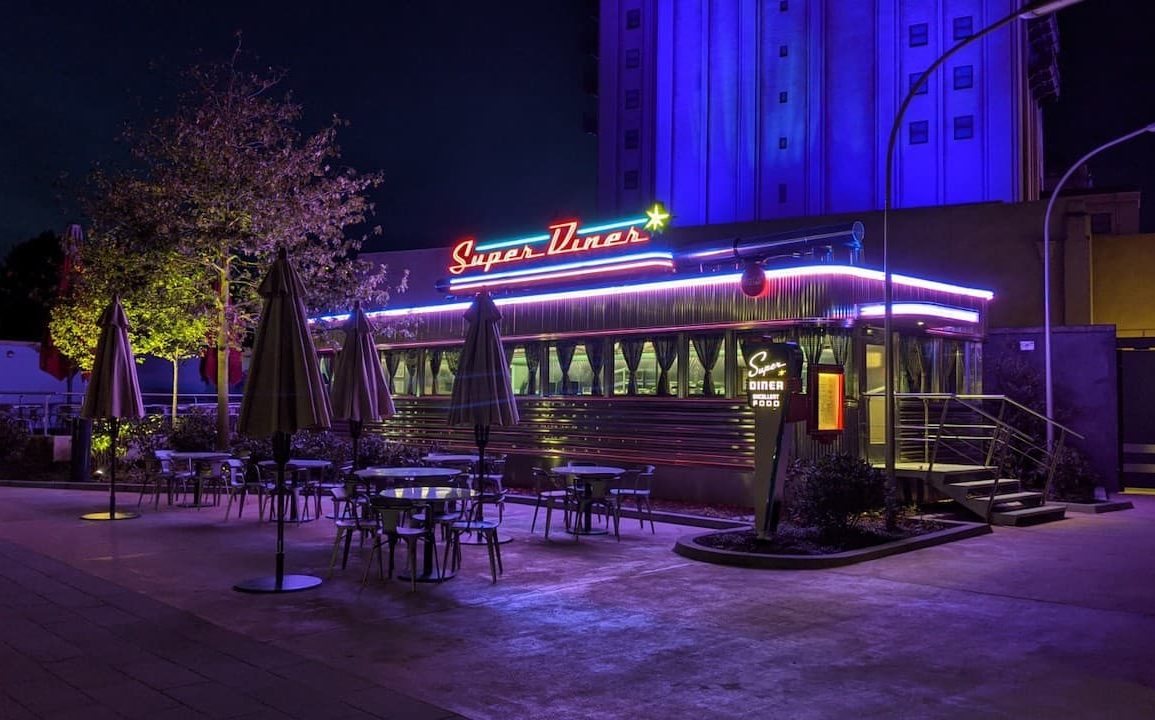 Behind-the-Scenes Story of Super Diner at Disneyland Paris, the ‘Oldest Restaurant in Any Disney Park’

Disney has shared a behind-the-scenes look at Super Diner in Avengers Campus at Disneyland Paris, the “oldest restaurant in any Disney Park.”

“When we were thinking about transforming the place, even before the concept of Super Diner, there was this rumor among cast members that Marylin Monroe dined there,” Keith said. “So I did a lot of research because it didn’t seem true (and in fact, never found proof). I found out that it was originally a local diner, built in 1935, located in New Jersey and called the Excellent Diner. It was then owned by a small family and at some point, in 1975, the diner closed.”

“The diner was then shipped to Europe by a German collector who wanted some kind of nostalgic Americana,” Thomas added.

The diner closed again and was purchased by Disneyland Paris during the development of Walt Disney Studios Park. It has been there since the park opened in 2002, originally as Café des Cascadeurs. It was rethemed to fit Avengers Campus for the land’s opening earlier this year.

“We wanted to keep the essence of the place in the interior,” Sebastien said of the retheme, “while bringing it into the 21st century because the story of Avengers Campus is happening right now, today. All the furniture was redone, and we redesigned the space. We kept the open kitchen side while improving the comfort of the cast members and guests. In the end, the retro vibe is still here while changing the materials chosen and the colors which are warmer than before.”

“For the outside,” Thomas said, “where we added a marquee, a big freestanding menu, and some murals, we really wanted to evoke the 1940s American diner aesthetic to complement this amazing piece of history. I added lots of reds and chrome detailing to tie in with the adjacent Avengers Campus architecture, while the name Super Diner is, of course, a nod to Super Heroes.”

Thomas looked at 1940s and 1950s American diner graphics as research. “Our perception of these diners is a little clouded because there have been so many revivals of that mid-century style, so many ‘back to the ‘50s’ diners and retro paraphernalia, and those are often not very true to the real thing. We really had to go past that and find real menus, real napkins, real signage, etc. from that era. I came across a lot of beautiful matchboxes that had illustrations on them of the restaurant where they were given out and did a similar illustration for the Super Diner. It ended up on the menus, the placemats, and the sandwich wrappers.”

“For me, this is a piece of history that has genuine authenticity at Walt Disney Studios Park,” said Keith. Talking about details, he pointed out a Coca-Cola ad on the diner’s wall terrace. Coca-Cola sponsors the diner and the ad is a real one from their archives updated to include a flying car.

“Due to its ideal location, we wanted to shine light on the diner itself and its history,” Thomas said, “and we found a nice tie-in with the Marvel Cinematic Universe developed in the movies and series through the character of Peggy Carter, who at one point worked at a mid-century diner called the L&L Automat. I should definitely give credit to Lorraine Huriet, production assistant and huge fan, who provided us with all this amazing input. This resulted in a few props you can see around the diner, such as newspaper articles and memorabilia from the L&L.”

The backstory of the Super Diner is that 1940s factory workers from Howard Stark’s Accutech flying cars company would visit the diner during their breaks. It was owned by Angie Martinelli, Peggy Carter’s friend who had always dreamed of opening her own diner. Tony Stark decided to keep the diner intact for new recruits.

Tony did add his own touches to the diner. A modern soundtrack of his choosing includes “Immigrant Song” by Led Zeppelin, which was featured in “Thor: Ragnarok,” and “Just a Girl” by No Doubt, featured in “Captain Marvel.”

“I remember one morning near the end of the project,” Sebastien said. “I just sat there, looking at my previsualization concept and looked at the place. This was it. We had achieved what we originally envisioned.”

“It’s the first time since I’ve started working at Disney that I’m seeing a project open its doors,” Thomas said. “It’s really satisfying to see people enjoy your work! It’s amazing to me how fans are picking up on these details. It’s a real incentive to keep striving for quality.”

In reference to its original name, the Super Diner’s tagline is “an Excellent Family Diner.”