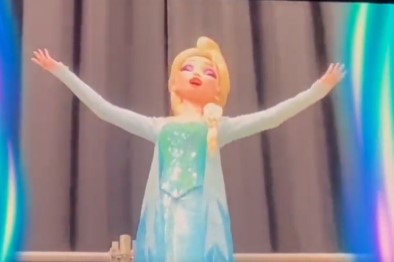 For those unfamiliar with Fantasy Springs, this is a large $2B land being added to Tokyo DisneySea, and it will feature new attractions for Tangled, Peter Pan, and Frozen. During the presentation, D’Amaro shared a video of the new Elsa Audio-Animatronic figure that will be part of the Frozen ride. This advanced figure includes extremely detailed facial features. This is in stark contrast to the figures used in Frozen Ever After at EPCOT, which utilize projections for facial movements, and have been known to produce some disturbing technical glitches.

Instead, as we can see in the video, this Elsa Audio-Animatronic is much more realistic and detailed, with natural gestures and intricate facial movements. Not surprisingly, the Oriental Land Company went the extra mile and had Walt Disney Imagineering create something truly exceptional.

In the preview, the Elsa Audio-Animatronic can be seen performing the hit song “Let It Go” in Japanese, which is expected to be a scene in the attraction.

Fantasy Springs construction continues to maintain a steady pace, and the land is expected to open in 2023.

Next
WDWNT is Hiring a Next.js/WordPress Engineer