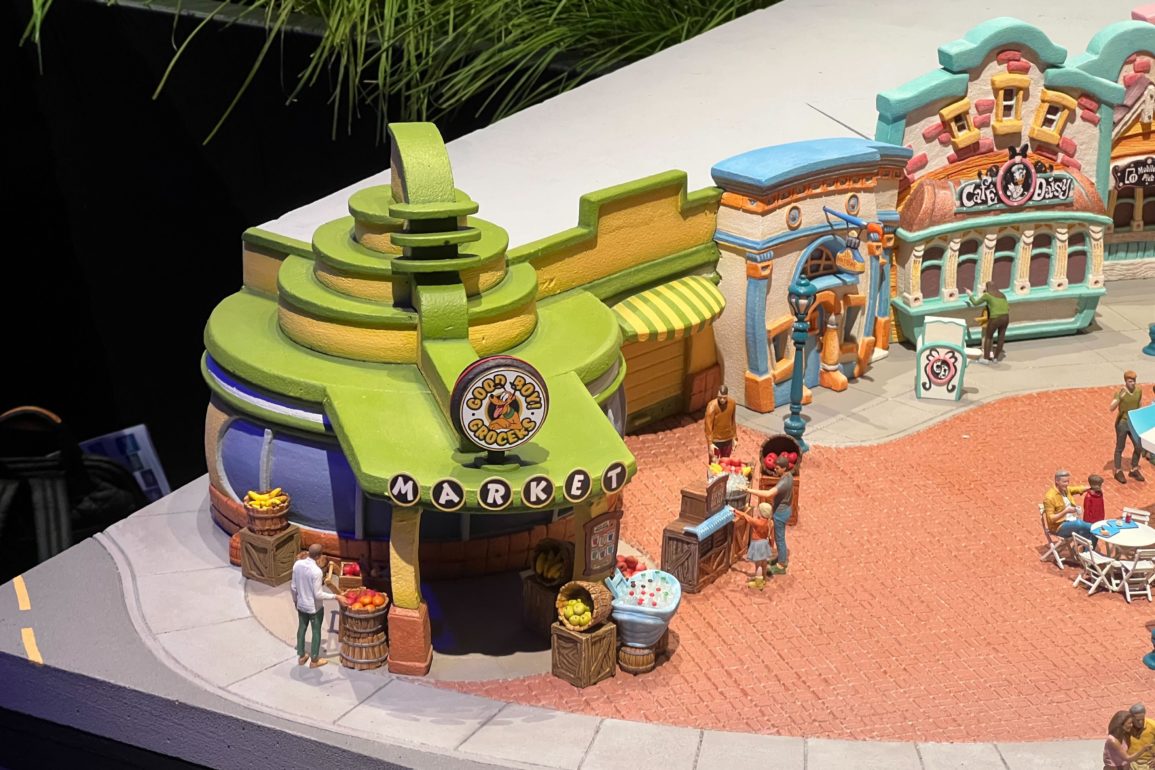 With the reimagining of Mickey’s Toontown fully underway, we get our first look at the project’s final form from the D23 Expo in Anaheim, CA. We have several new updates on the project as seen in a scale model on display on the show floor. First up are two new restaurants planned for the land.

The concept art for the land is on display on the wall, but the real draw is the scale model also available in the pavilion.

The model is presented in several sections broken up by area. This section of the model is Downtown Toontown. We can see the entrance to the upcoming attraction, Mickey & Minnie’s Runaway Railway, within the El CapiTOON Theater to the right.

The focus of this article, however is off to the left of the model. Here we find the two eateries that serve the animated citizens of Toontown and the visiting human guests. Good Boy Grocers is a Pluto-themed roadside stand offering grab-and-go snacks and drinks. This replaces the former Goofy’s Gas Station which offered the same fare in a relatively similar setup.

To the right of Good Boy Grocers is the rethemed Café Daisy. This quick service window will offer diner classics for hungry Toons. This location was formerly a similar quick service restaurant named Daisy’s Diner serving similar fare. To the right of Café Daisy is the mobile order pick-up window for the restaurant, formerly Pluto’s Dog House. Beyond that, toward the back of the area, the bulging pink-and-tan building was the former Clarabelle’s ice cream location which has been removed entirely and not replaced by anything seen in the model.

The informational placard for the display shows the proprietors of each establishment.

The center of Downtown Toontown has seen the removal of the gazebo, with more area opened up for seating and overhead light strings hung between the newly-installed trees.

The bank and Toontown City Hall are still present through the reimagining.

We also got a better look at the entrance of the new attraction through the El CapiTOON Theater, whose spire can be seen from outside the land as work continues.