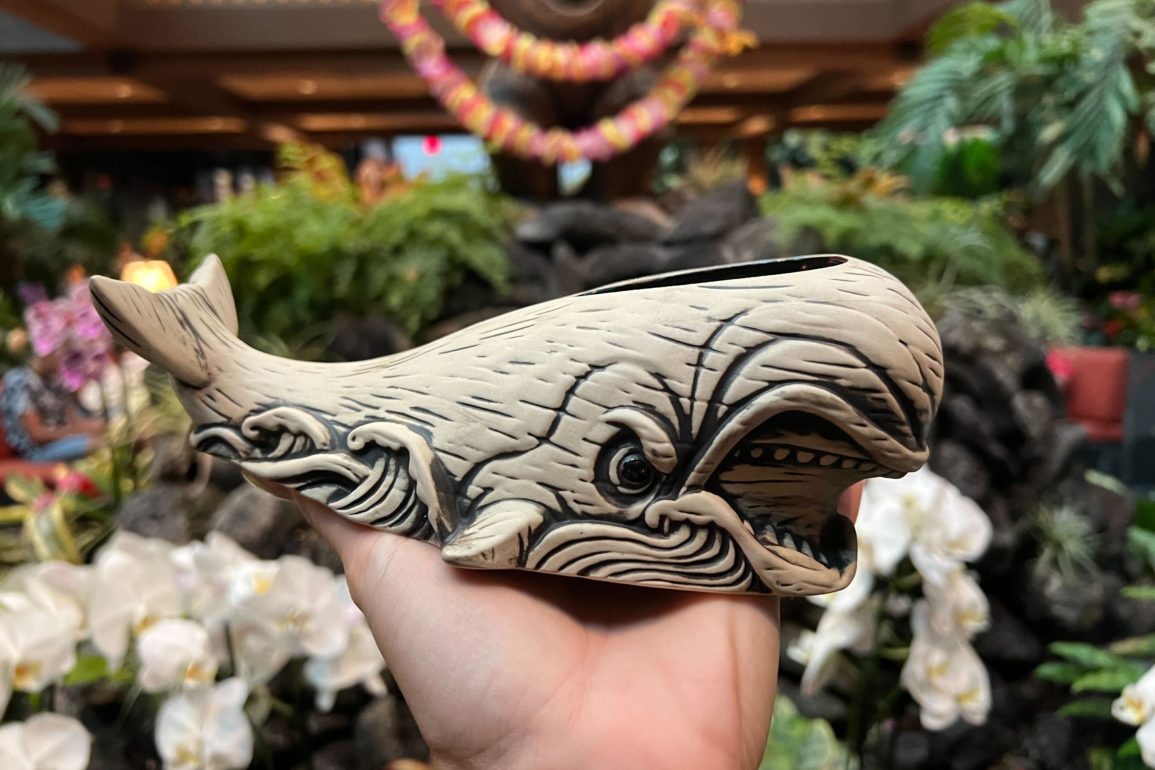 The mug previously debuted at the Disneyland Resort in late August. Today’s release coincides with Disney+ Day and the premiere of the remake of “Pinocchio.”

The mug comes with an alcoholic cocktail, the Whale of a Tale, but a non-alcoholic mocktail, the Treacherous Waters, can be purchased for an additional $6.93, tax included.

Shortly before the lounge opened at 3 p.m., bartenders could be seen preparing a number of cocktails for the line of customers waiting to purchase the mug.

The Treacherous Waters is made with ginger ale, falernum, cinnamon, lime juice, and strawberries, and garnished with a strawberry, pineapple leaf, and dried ginger. It can also be ordered separately for the same $6.93, tax included.

Meanwhile, the Whale of a Tale is made with Malfy Gin Originale, Plantation Pineapple Rum, Italian liqueur, pineapple juice and oregat (or almond) and garnished with an orange wheel, charred pineapple wedge, and pineapple leaf. It can be ordered without the mug for $15.98, tax included.

As a neat Easter egg, the cocktail is named after a song heard in “20,000 Leagues Under the Sea,” which plays heavily in the song rotation heard at Trader Sam’s.

This isn’t overly sweet as opposed to many of the other drinks we’ve been used to getting with mug releases.

You get a good taste of the gin and juice, but there’s also something bitter as well, and not in a good way. You can certainly detect the alcohol. It almost tastes like the juice went bad.

Overall, it was okay. We don’t think we’d order it on its own, though.

Unlike the Disneyland version, this mug is cream-colored, accented with black marks to give it a wooden look.

Otherwise, the sculpt is the same.

It also has waves underneath, to give Monstro the look as if he’s swimming in the sea.

The head is hollow to hold drinks.

The bottom notes that this is a Trader Sam’s Grog Grotto first edition, exclusive to Walt Disney World.

Will you be sailing to Trader Sam’s to pick up the Monstro tiki mug? Share your thoughts in the comments!