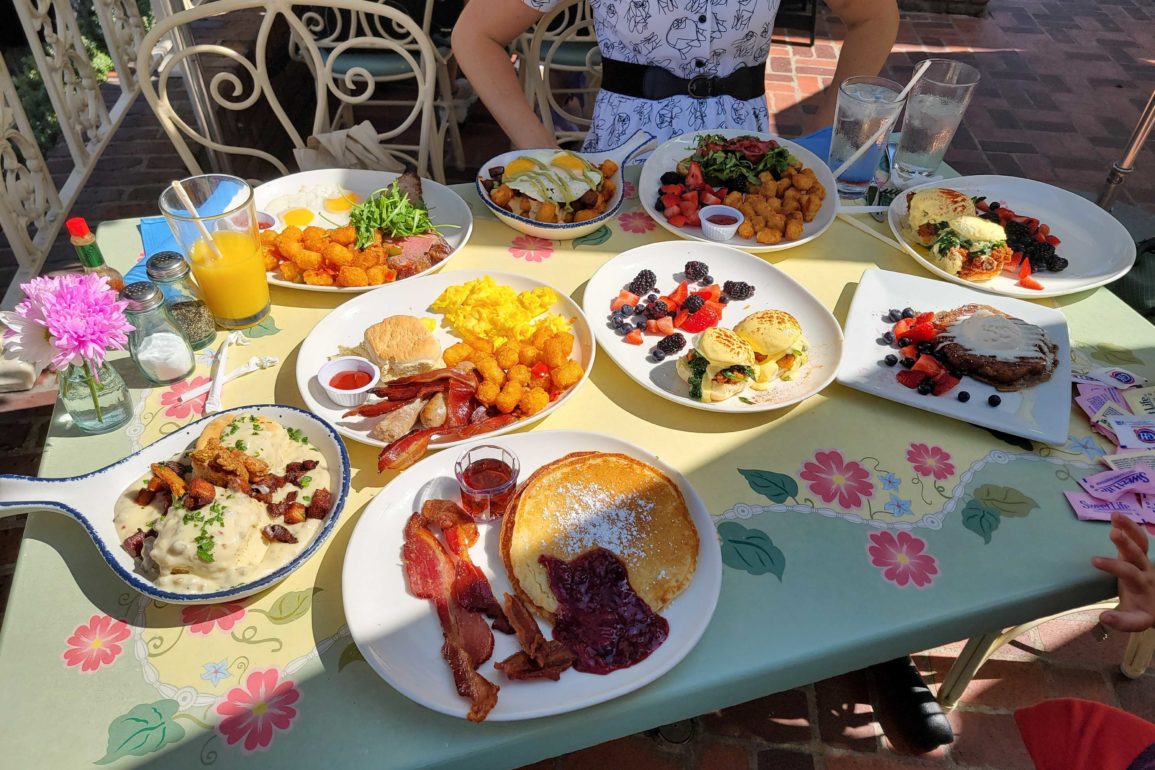 Breakfast recently returned to River Belle Terrace in Disneyland with an updated menu, and we stopped by to try it all.

We tried everything on the breakfast menu. Watch our video review below and keep scrolling for photos and more information.

This is the classic American breakfast. The O’Brien potatoes in this dish, as well as all the others on the breakfast menu here, are actually tater tots intermixed with peppers. It doesn’t work as well as we had hoped, but it’s still not bad to have a side of tater tots. The eggs and bacon are run-of-the-mill while the sausage is a complete letdown with no complexity.

The biscuit, on the other hand, is spectacular, and it’s used several times throughout this menu. Perhaps not quite as good as the biscuits from Knott’s Berry Farm just up the freeway, but still no slouch.

Overall, this is a fairly straightforward breakfast that doesn’t bring a lot of surprises, but is a solid choice to start your Disney day.

This is probably the best dish on the breakfast menu. The biscuits, as mentioned, are fantastic, and the thick, hearty country gravy brings a rich flavor that can’t be missed.

The crispy pork belly works much better than we thought it was going to and is not overly fatty, as pork belly can tend to be sometimes. It’s definitely a heavier breakfast that will stick to your ribs, but the flavor is so good we don’t mind being a little bogged down in the morning.

This is a gut bomb of fried food and sauced meat that is overwhelming in intensity but underwhelming in flavor. The brisket is fine, but it’s so coated in sauce that it’s hard to tell much about the meat itself. The tater tots that are the base of this dish are plentiful but nothing special.

The one aspect of note is the pimento cheese which, when tasted on its own, is creamy and complex with just a hint of spice to keep it interesting. But it is summarily lost in the shuffle of BBQ sauce, fried tater tots, and runny egg. Altogether this is a very heavy dish that we would not order again.

These classic pancakes are well-made. They aren’t revolutionary, but they get the job done. They are crispy and delicious and come paired with a lackluster berry compote. The compote tastes like a berry punch rather than real fruit flavors mingling together, and it distracts from an otherwise enjoyable pancake. But that being said, it is still just a pancake, and we can’t be mad at it or particularly impressed by it.

This Benedict doesn’t work as well as the fried chicken one.

The shrimp and catfish weren’t as flavorful and complex as the hot honey fried chicken, so when tasted back-to-back, this one pales in comparison.

Even when eaten on their own, the shrimp and the catfish pieces aren’t spectacular and are rather blander than expected.

And with the elevated price tag, this is one to skip in favor of the other Benedict.

This one is amazing and gives the Biscuits and Gravy a run for its money for the best breakfast dish on the menu. The fried chicken is a fantastic centerpiece, and when combined with the hot honey, it is elevated to the next level of awesome flavor.

It’s hot but not too intense. The Hollandaise sauce is incredible and rich, which, when paired with the slightly runny poached egg, becomes the perfect complement for the chicken and biscuit. We wish there was something more than a handful of berries on the side, but we’ll still be back for this dish.

Most of the best avocado toasts in LA come from weird, hole-in-the-wall coffee shops rather than restaurants. And this one, while decent theme park fare, pales in comparison to other venues. It is nice to have something that’s not fried and heavy on the menu, and the avocado is very fresh.

The individual tastes all seem to be in business for themselves rather than coalescing into one coherent dish, and while the flavors aren’t bad in any way, they never quite take off. That being said, if you’re in the mood for something light and fresh (and plant-based) instead of a heavy, meaty, fried breakfast, then this is your option.

This is listed on the menu as a New York steak, but we actually received a thick, hearty slice of prime rib.

The prime rib was delicious and perfectly cooked, though not heavily seasoned. Unfortunately, as with several of the meats on this menu, the seasoning is lacking, and it ends up being just meat-flavored meat. It worked okay for the prime rib as the delicate, medium-well steak doesn’t need much help to be delicious.

The sunny side up eggs go along with this nicely for a classic combination that is hearty but does not particularly stand out in flavor.

This was a different style of monkey bread than we have had before in that it is cooked up into a griddle cake rather than in a ramekin or dish. The flavor is fine, nothing particularly stand-out but still satisfying. The maple doesn’t come through as strongly as we would like, with more of a cinnamon spice note than maple. But that being said, it’s still a solid treat that is a nice way to end a meal here at River Belle Terrace. Just manage your expectations.

Overall, the new breakfast menu adds more choices to start your day at Disneyland. While many of the dishes weren’t worth going out of your way, we will be back for the Hot Honey Fried Chicken Benedict again.