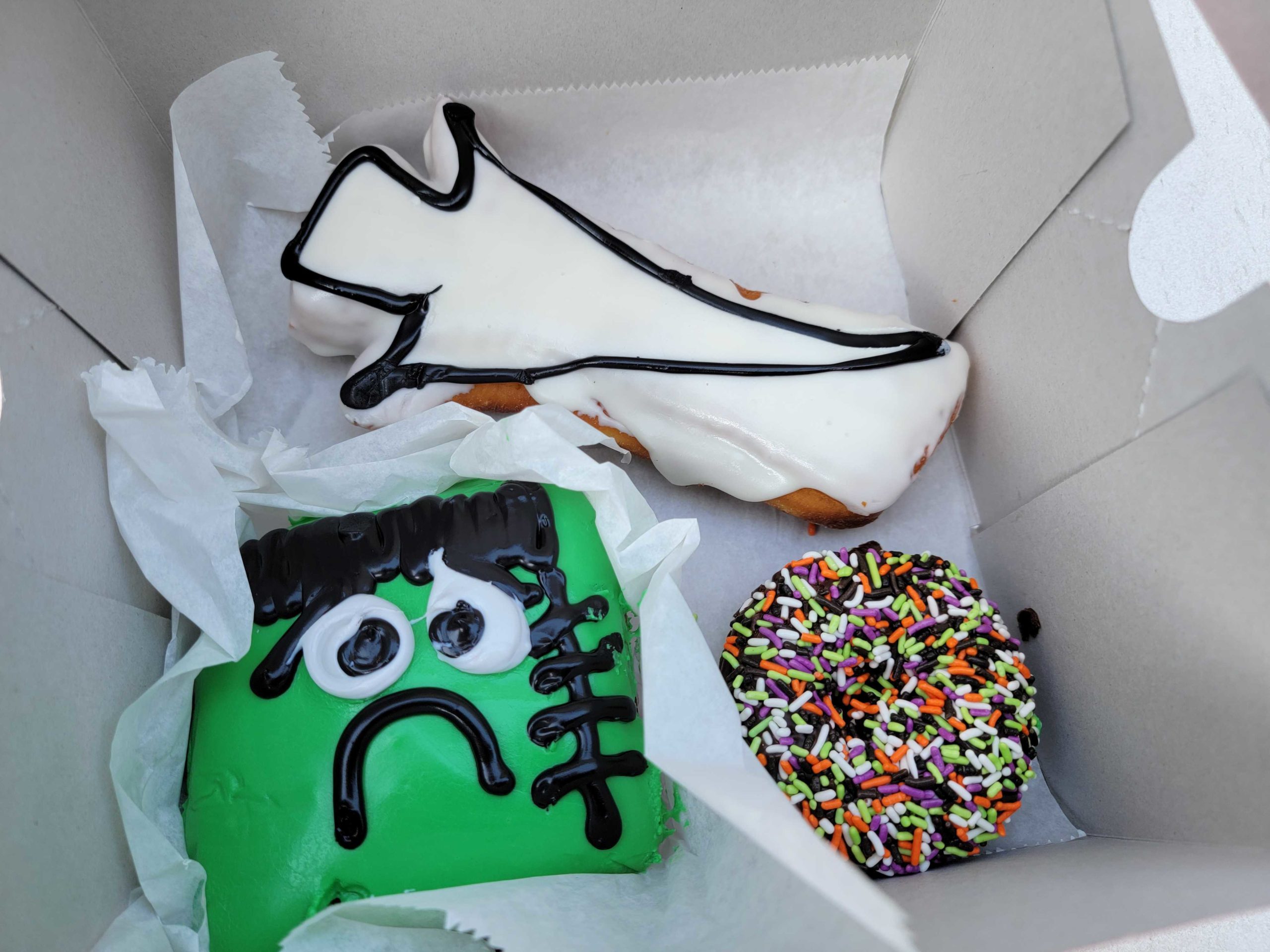 To see our video review of this restaurant and more Halloween Horror Nights foods, check out the video below. And keep scrolling for more pictures and our full review.

These doughnuts are available all day at Universal CityWalk Hollywood, meaning those too frightened to visit Halloween Horror Nights can still enjoy them.

As Dr. Frankenstein said to Igor in the graveyard, let’s dig in!

This is a plain raised yeast doughnut decorated as a ghost. It’s the same shape as the classic Voodoo Doll Doughnut, but it doesn’t have any filling. On its own, it’s a great doughnut, though it definitely has less going on than the Voodoo version and even has less in the way of frosting as the ghost decoration on top is less intricate than the Voodoo doll. That being said, it’s still a delicious doughnut that hits the spot, with a classic flavor that’s the best version of a plain frosted raised yeast doughnut that you’ll find anywhere.

This square doughnut is decorated to look like Frankenstein’s monster and filled with a thick, decadent chocolate cream.

There is plenty of everything — an ample amount of frosting, a thick, hearty filling, and even the raised yeast shell doughnut isn’t lost in the shuffle.

Every flavor gets its moment in the limelight, making it a well-balanced and delicious doughnut that will leave you grunting for more like the Monster you are. We recommend this!

This was, surprisingly, our favorite of the specialty doughnuts. A deep, dark chocolate cake doughnut at its base is coated in chocolate frosting and enough sprinkles to pave a road. It. Is. Spectacular.

The cake doughnut was somehow both crispy fried and still moist and soft, with a spongy center that was decadent but not overly dense. The flavor of the cake doughnut itself was so rich and amazing that it would have been fine as a treat on its own, but then adding the creamy chocolate frosting and the ample amount of sprinkles, it becomes not just one of the best Halloween Horror Nights offerings at USH overall, but one of the better doughnuts on the menu here at Voodoo Doughnut. We will be returning for this, probably with every visit.