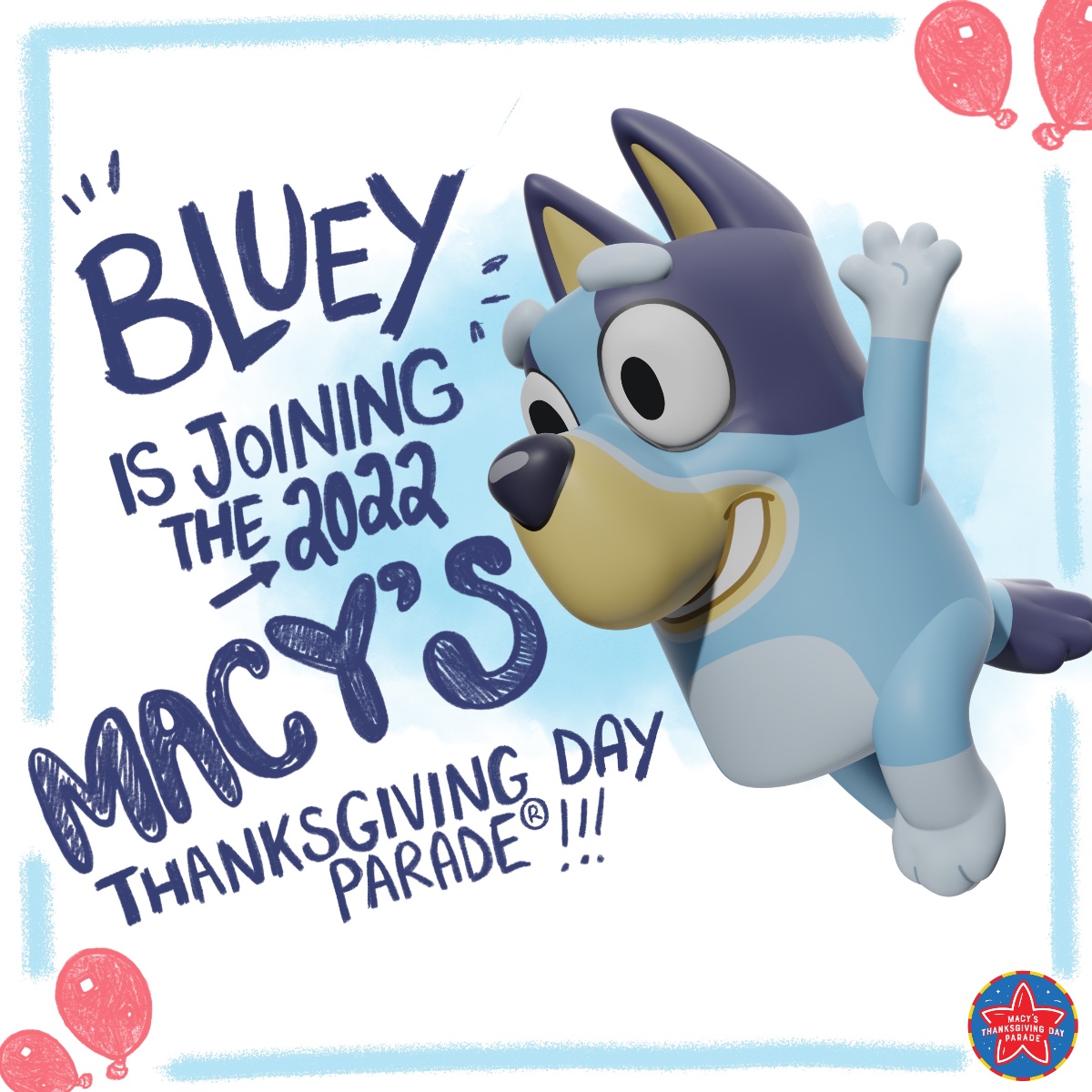 Today BBC Studios and Macy’s announced that Bluey, the star of the hit series “Bluey” will make her debut as a new giant character balloon in the 2022 Macy’s Thanksgiving Day Parade.

On their official Twitter page they said, “Hey New York, we’ve heard you’re really good at Keepy Uppy,” a reference to an episode in which the family tries to keep a balloon afloat for as long as possible.

“Being part of the Macy’s Thanksgiving Day Parade is a true highlight for Bluey,” said Rebecca Glashow, Chief Executive Officer, Global Distribution, BBC Studios. “This iconic event has long been an important part of the holiday season for kids and families across the U.S. We couldn’t be more excited that Bluey will be there to join this year’s celebration in New York City.”

According to a press release, the Bluey balloon was created by Macy’s Parade Studio’s team of artists and measures 51 feet long, 37 feet wide, and 52 feet tall. Approximately 50 gallons of blue paint was hand painted by the team to bring Bluey to a larger-than-life form.

“As one of the most popular characters in children’s entertainment today, we could not be more excited to welcome Bluey, all the way from Australia, to the 96th Macy’s Parade line-up,” said Jordan Dabby, producer of Macy’s Thanksgiving Day Parade. “Millions of families will be thrilled to see Bluey celebrate her first New York Thanksgiving as she soars above the streets of Manhattan on Parade Day.”

The balloon’s appearance will be in conjunction with “Bluey’s Big Play The Stage Show,” which will debut on November 19 at the Hulu Theater at Madison Square Garden in New York City. It will then go on a multi-city tour across the United States.

The stage show is a new theatrical adaption of the series featuring brilliantly created puppets, an original story by Joe Brumm, and new music by Bluey composer Joff Bush.

“Bluey,” an Emmy®-winning animated series from Australia, debuted in 2018 on ABC Kids. In its third season, one of the most-watched children’s shows in the world, streams on Disney+ and airs on Disney Junior and Disney Channel.

The Macy’s Thanksgiving Day Parade will air nationwide in the U.S. on NBC and stream on Peacock, on Thursday, November 24, 2022, from 9 a.m.- noon; in all time zones.