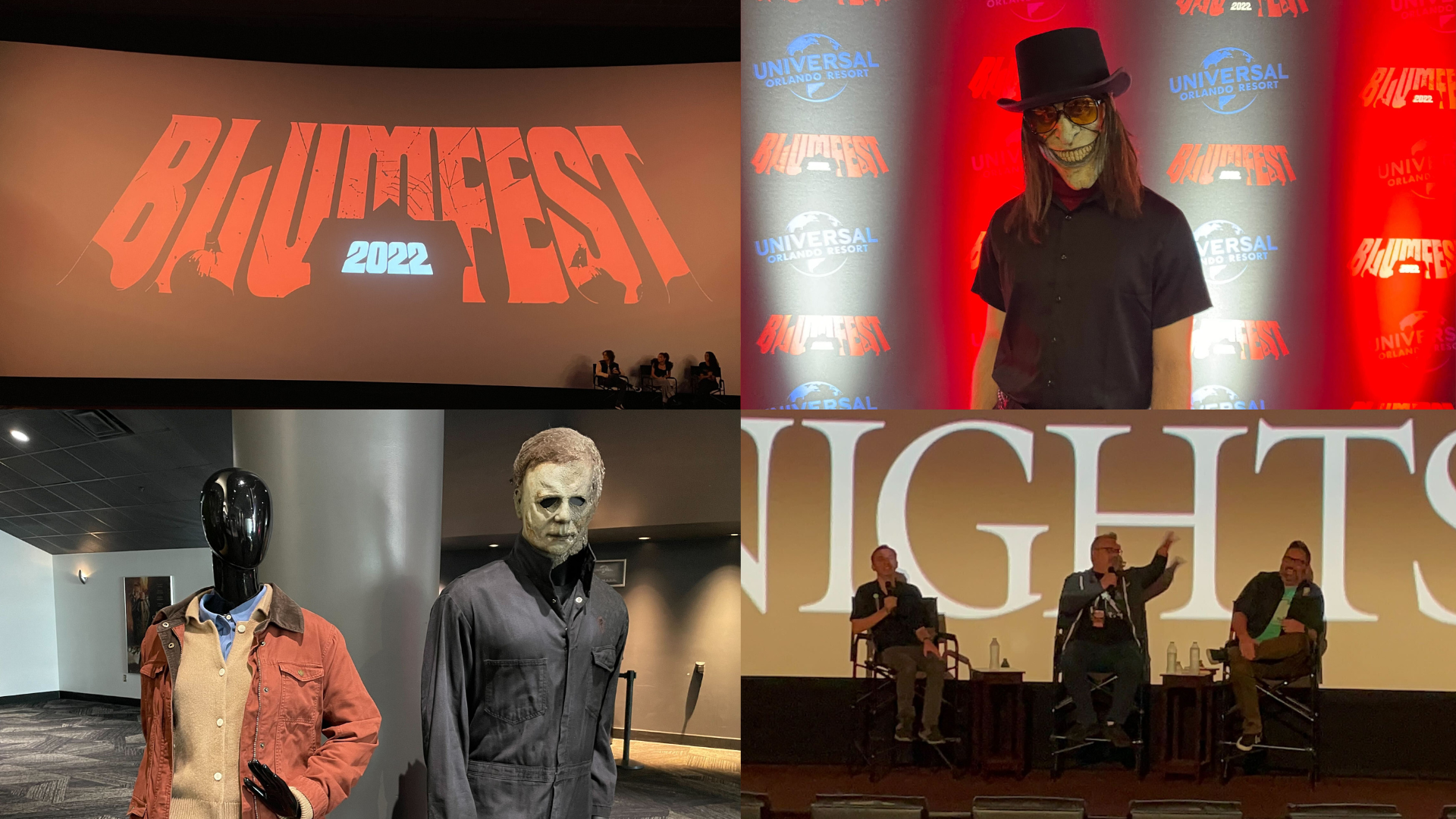 The third annual BlumFest event was held at Universal Orlando Resort this year, and we were lucky enough to be able to attend. The event was in the Cinemark Theater in CityWalk so guests could enjoy a double feature of “The Black Phone” and the new “Halloween Ends” films. In addition to the screenings, there were a few special surprises for guests, including a Halloween Horror Nights question and answer session. Event check in was at 11:15 a.m., so we arrived bright and early at CityWalk to pick up our event credentials.

A friendly Team Member was directing guests toward the check in for BlumFest, and there were already a lot of guests lined up early. The event was free, and you can sign up to receive emails about future events at Blumhouse.com. Now, let’s see what’s in store for us!

Once we had our seats, we settled in and waited for the film to start. The host introduced BlumFest and asked a variety of trivia questions related to Blumhouse films. You could tell there were a lot of true horror fans in the audience! Before the screening of “The Black Phone” started, we were surprised with a special appearance from two of the stars of the film!

Mason Thames and Maddie McGraw both star in “The Black Phone” and stopped by to introduce the film and answer some questions. It was really fun to hear them talk a little bit about the movie right before the showing. They would be returning again later to talk more about the movie.

While the credits rolled, a mysterious figure with black balloons walked in front of the screen. There have been sightings of the Grabber!

After the film, Thames and McGraw sat down to answer more questions. They were extremely talented in the movie, so we enjoyed listening to them talk more about the experience. You can watch their full interview on our YouTube channel or by scrolling to the bottom of this page.

McGraw’s sister is starring in the upcoming Blumhouse film “Megan,” and we all got to watch the trailer for that movie. Honestly, it looks terrifying, and we can’t wait to see it. Go check out the trailer now!

The Grabber made an appearance! He was lurking around just outside of the theater. This is not a character you can meet anywhere else around here, so this was a really unique experience. Backgrounds were set up for photo ops, and we got a lot of great shots.

Thames and McGraw were kind enough to hang out and meet fans after the movie, too. Guests could get a photo with the pair, and we even had them sign our HHN map since “The Black Phone” is featured in the Horrors of Blumhouse haunted house for Halloween Horror Nights.

The second movie of the day would be “Halloween Ends,” and BlumFest had costumes from the film on display for the event. We took a good look at all the costumes before watching the movie so we could identify the characters.

These costumes would only be on display for BlumFest, so this was a very exclusive opportunity. This is a really nice treat for the fans to be able to get up close to these pieces of wardrobe.

If you’ve seen “Halloween Ends,” do you recognize who wore these costumes?

They even hung out and chatted with fans for a little bit after the panel. Everything about this event was run so smoothly, and it was well put together. It was organized and relaxed, and everyone was enjoying themselves.

Another surprise for the BlumFest guests! Everyone in attendance was given one of these exclusive shirts for “The Black Phone” that you could only get from the event. The artwork is way different than the merchandise you’ll find in the park, so I couldn’t wait to wear mine. Finally, we were treated to a showing of “Halloween Ends.” It’s been a great day, and we’re ready to watch the final movie!

If you have the opportunity to attend BlumFest next year, we highly recommend it! It was free and gave us a day full of Blumhouse movies, panels with special guests, costume displays, and more. You can watch our video from BlumFest and hear more from the panelists in our video below. For more information on events like this one, be sure to check out the official Blumhouse website and sign up for emails. And stay tuned to Universal Parks News Today for all the latest happenings around the Universal parks!