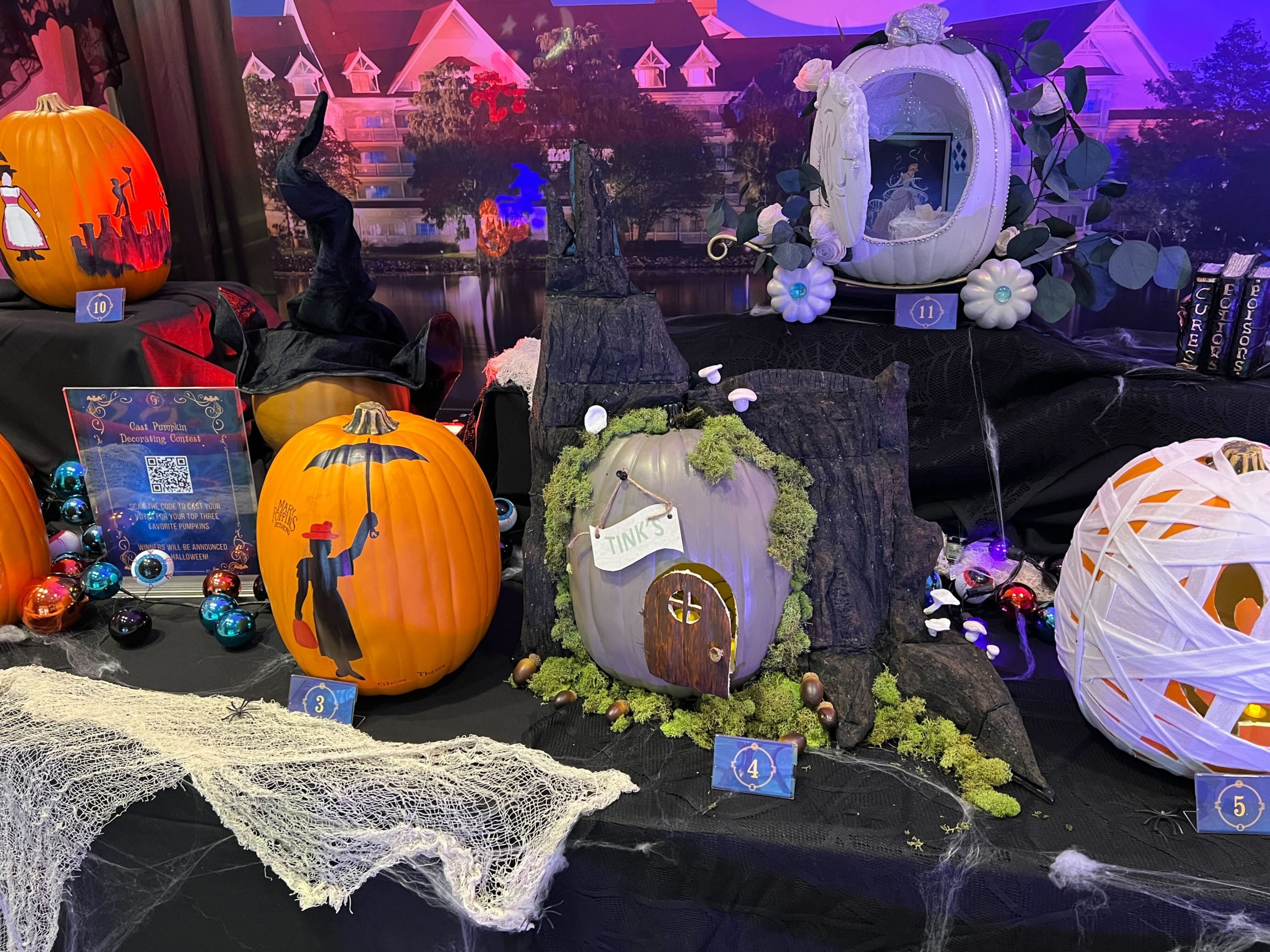 Halloween is just around the corner… for real this time! And Cast Members are getting into the spirit of spooky season with a delightful pumpkin decorating contest at Disney’s Grand Floridian Resort & Spa! Naturally we stopped in to take a look and share their hard work.

With 1900 Park Fare being one of the few restaurants at Walt Disney World still closed as a result of the pandemic, the pumpkin decorating contest has been set up in its still-unused vestibule in the lobby of Disney’s Grand Floridian Resort & Spa.

There’s thirteen delightful pumpkins all decorated and carved by Cast Members at the resort.

Number one clearly comes from the team over at The Grand Floridian Spa. It depicts Te Fiti complete with her iconic heart at the center. Flowers adorn it on the sides, and Moana’s boat is at the lower left. This won’t be far off from reality, as a 16-foot-tall Te Fiti figure is set to be installed at the Journey of Water inspired by “Moana” once it opens late next year at EPCOT!

Number two is a stylized depiction of Madam Leota from The Haunted Mansion. Bells and other instruments from her seance surround her.

At number three, we see a very carefully drawn silhouette of Emily Blunt’s interpretation of Mary Poppins from “Mary Poppins Returns.” There’s no carving on this one.

Tinker Bell has made her temporary home at pumpkin number four, where it has been entirely painted over to depict a delightful home in Pixie Hollow. Faux shrubberies grow on and around it, and a little door opens up into her pumpkin home.

There’s a more traditional decorator here at pumpkin five, with a not-so-scary jack-o’-lantern face wrapped up like a mummy.

The recreation team proudly labeled their “Obi-Wan Kenobi”-inspired pumpkin, carved out to look like Darth Vader from the climactic finale of the Disney+ series released over the summer.

The Mansion comes to life again in number seven, where we see the Hitchhiking Ghosts and Constance Hatchaway depicted on this all-black pumpkin.

With number eight, we can let our imagination flow with this clever twist — a plain pumpkin, ripe with creative potential!

Cheshire Cat is right at home on number nine, with his kooky face carved out across the center. Flowers, Mickey symbols, and other icons of wacky confusion are scrawled across.

Number ten also follows the journey of Mary Poppins, drawing instead from the original 1964 film. We see chimney sweeps dancing on rooftops while Mary floats at the center.

True to the beloved film, number 11 showcases a pumpkin turned into a coach for Cinderella! Faux pumpkins with blue jewels make up the carriage’s wheels, the seams are lined with sparkling (plastic) diamonds, and Cindy’s even inside with her lovely ballgown.

This tall and skinny pumpkin shows off Donald, Goofy, and the gang in their Halloween best. At the top it reads “step through screening area”, presumably a reference to Mickey & Minnie’s Runaway Railway over at Disney’s Hollywood Studios.

And finally, the merchandise team channeled their inner Marvel (and perhaps some personal experiences) with a full paint job of Groot working as a Cast Member, complete with his nametag! An invisible guest asks “Do you have the Grand Floridian Loungefly?” And he of course responds “I am Groot.”

You can scan the QR code and choose your three favorite pumpkins via the QR code on the sign above, and the winners of the pumpkin decorating contest will be announced on Halloween! And feel free to shout out your favorites in the comments below as well!