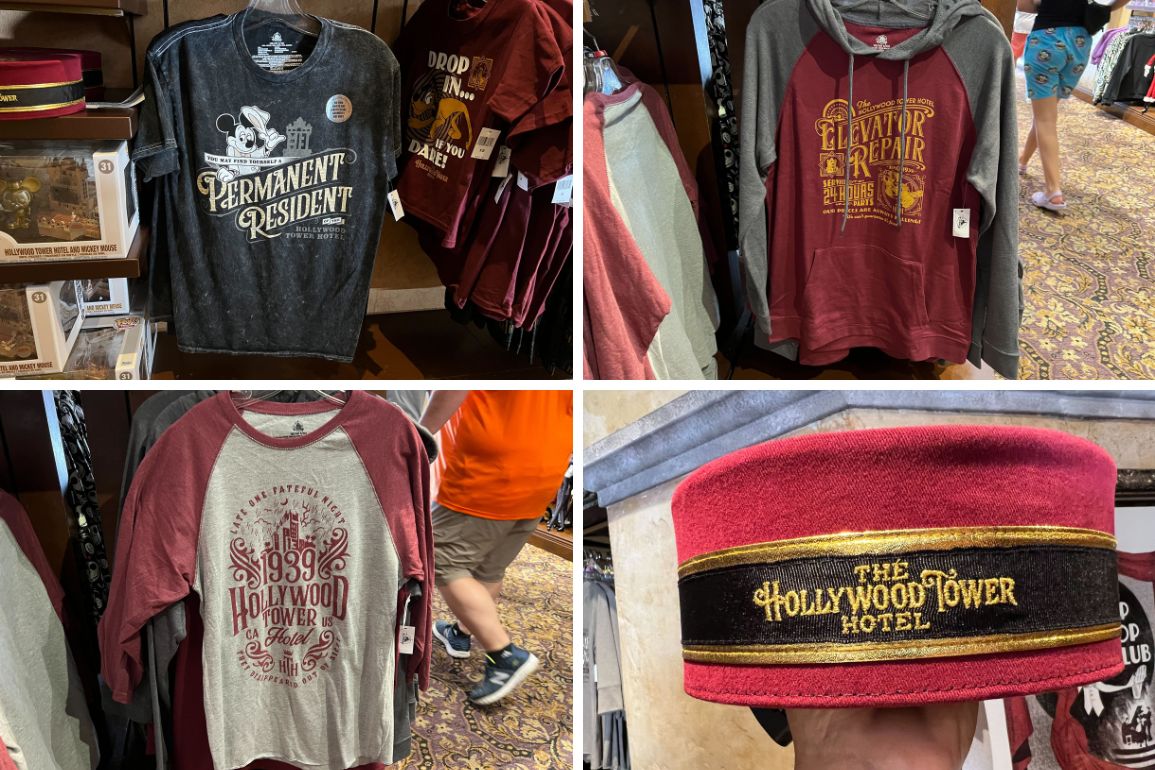 We have recently found some jaw-dropping new merchandise at “The Twilight Zone Tower of Terror” gift shop – Tower Hotel Gifts at Disney’s Hollywood Studios. As you may remember, we reported back in June, that the new merchandise has dropped any reference to “The Twilight Zone Tower of Terror” and now says “The Hollywood Tower Hotel” — presumably to avoid paying licensing fees to CBS. Let’s take a look at what’s new!

This “Permanent Resident” short-sleeved t-shirt has a large image on the front featuring a Mickey Mouse in 1940s garb against a black and white – slightly distressed – background.

With his white suit and fedora, Mickey is giving an inquisitive look as if egging onlookers to take advantage of the offer.

In a font, reminiscent of old Hollywood, the shirt says, “You May Find Yourself A PERMANENT RESIDENT of The Hollywood Tower Hotel.”

In the background, is a silhouette of the hotel with “TOT” running down the left side of the building.

The hotel logo – HTH – in the middle of a shield, flanked by two dragons and topped with a crown, is silkscreened on the left sleeve.

The entire black t-shirt has a distressed design that looks like abstract images of the hotel in a ghostly grey. The sleeves, collar, and hem are all double-stitched in white thread.

There is a sticker on the shirt informing guests that because of the unique design and printing of this t-shirt, each shirt may be slightly different.

If you were the actual elevator repair person for The Hollywood Tower Hotel, you might not want to be caught “dead” in this shirt. However, since you’re not, it’s a great shirt to wear!

This lightweight two-toned grey and burgundy baseball hoodie is perfect for almost year-round wear. It has cuffed sleeves and a kangaroo front pocket.

Set against a burgundy background, in a yellow-color 19th Century-style font, the shirt features the name of the hotel with the elevator floor indicator to the left. Beneath “Elevator Repair” is the logo of the hotel, the opening date – 1939 – and appropriately enough – Goofy as the elevator repair man.

Although service and parts are available 24 hours, the shirt warns “Our Prices Are Always Falling!” and “We can’t guarantee it’s fixed.”

The back of the baseball hoodie features The Hollywood Tower Hotel logo in the upper center of the shirt in gold.

The cuffed sleeves are finished off with a double stitching.

This baseball long sleeve t-shirt has a grey body, burgundy long sleeves & collar, and The Hollywood Tower Hotel advertised in burgundy across the front.

Set against a stormy moonlit sky, the hotel rises up from the year it was founded. On either side of the name of the hotel are “CA” and “US” noting its California location. The hotel logo is at the bottom. Framing the design is “Late One Fateful Night” and “They Disappeared Out of Sight” – a warning to all who want to check-in.

The back of the t-shirt has been left unadorned.

The sleeves, which are double-stitched, are 3/4 in length.

Recently we showed you an adorable keychain version of “The Hollywood Tower Hotel” Bellhop Hat, now we have the real thing – or at least a full-size, wearable version.

This new style, which as we noted with the keychain, is not a replica of the one worn by the Cast Members, but a creative interpretation.

Running around the lower half of the red 100% cotton hat is a black and gold band with “The Hollywood Tower Hotel” in gold-toned embroidery.

Silk screened on the top of the hat is a silhouette of the Hollywood Tower Hotel framed in an art deco design.

The bellhop hat is 23 1/4” in diameter and with an adjustable velcro strap, it should fit most heads. We also found this bellhop hat for sale on shopDisney.com.

Will you be buying any of these for yourself or for gifts this holiday? Let us know in the comments below.

Check out some other heart-stopping Tower of Terror merchandise we recently found: