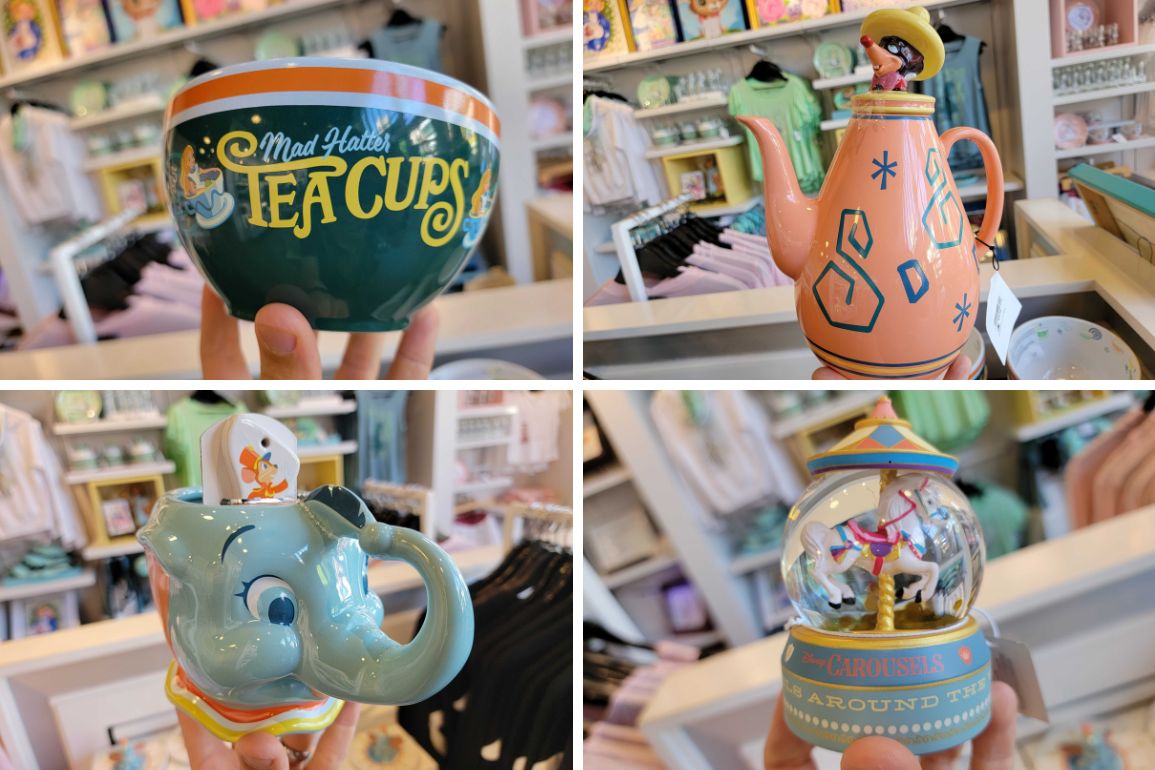 We found this beautifully detailed stoneware bowl at the Wonderground Gallery at Downtown Disney. Perfect for your morning cereal, as a nut or candy bowl, or even a large bowl of tea. The top of the bowl has a large white rim accented with an orange stripe. The lower half of the mug is a dark green with “Mad Hatter Tea Cups” written in light blue and yellow script.

Surrounding the bowl are a few characters from “Alice in Wonderland” riding various teacups. Set against a background of blue, green, and pink swirls and geometric shapes is Alice riding in a blue teacup and the March Hare in an orange teacup.

Further, around the bowl, we find the Mad Hatter himself swirling around in a white and green teacup ready to pour a cup of tea from his yellow teapot.

The inside of the bowl is all white with colorful accents of shapes and teacups and saucers lining the top.

Accented by a dusty rose handle, Alice is having her cup of tea while spinning in a pink and white tea cup.

In the center is the host — the Mad Hatter. He is pouring tea from his yellow teapot while riding in a green and white teacup with yellow flowers.

On the opposite side, we find the March Hare in a blue tea cup.

As you can see from the top view down inside, the mug is sage green and is wider at the top, and tapers towards the bottom.

This adorable stoneware jewelry dish features everyone’s favorite elephant, Dumbo, in the center “ring.” The dish is accented with a large center circle in varying shades of blue surrounded by a ring of white and orange. Varying sizes of gold spokes radiate out towards the edge.

This jewelry dish is perfect for holding rings, bracelets, and necklaces on his trunk, around his body, or on the dish itself. Earrings and small pins could also be accommodated as well.

This is simply nice enough to display on its own.

What is afternoon tea without a teapot?! This adorable teapot features the Dormouse popping out of the top – which also is the lid. The design of this teapot is reminiscent of the Mad Hatter attractions at the Magic Kingdom and Tokyo Disneyland.

The stoneware teapot is a muted shade of orange with yellow and blue stripes at the bottom and blue geometric designs around the pot.

Looking closer at the teapot lid, we see the base is yellow with a center strip found on the body of the teapot.

This large stoneware Mad Hatter teacup tray is ideal for transporting your teacups and saucers to the table or used to display your freshly baked scones, delectable finger sandwiches, and sweets for afternoon tea.

In this design, it is just the Mad Hatter surrounded by four empty teacups. In the lower center, written in blue and yellow, is “Mad Hatter Tea Cups.” The generously sized rim is trimmed in orange. The outside is glazed in white.

This adorable Dumbo themed trinket dish with a lid is perfect for jewelry, loose change, candy, nuts, or anything that you can fit into it.

The scalloped-edge lid, representative of the big top tent, has a golden center dome with light and dark blue stripes making up the tent itself.

The body of the dish is trimmed in muted orange on the top and bottom, and symbols representing Dumbo run around the circumference. These images include Timothy the Mouse (the Ringmaster) and Dumbo’s famous flying feather in two shades of blue.

On the inside, the interior of the base and lid are painted in a pale blue-gray — representative of Dumbo himself.

Dumbo the Flying Elephant Mug with Timothy the Mouse Spoon – $24.99

You’ll be able to fly or do anything else after having your morning coffee from this Dumbo the Flying Elephant mug. The pale blue-gray mug is the full face of Dumbo, with his trunk serving as the handle. Included with the mug is a ceramic spoon featuring Timothy the Mouse.

The back of the mug features the ride vehicle from behind. It is accented by his tale and a blue, orange, white, and yellow ruffle on the base.

Give your table a little flair with these Dumbo the Flying Elephant Salt & Pepper shakers. The pair represent the ride vehicles from the attraction of the same name.

Looking inside the box, we see the pair nestled securely inside. Typically the two holes are for salt, and the three-hole shaker is for pepper, but if you prefer more salt, then switch them around!

The all-blue flying Dumbo has pink ears, a gold and white ruffle around his neck, a gold-trimmed hat, and gold trim on his body. To give the illusion of flying, he is resting on a white, puffy cloud as its base.

The other shaker is also blue but is trimmed with a yellow, white, and green neck ruffle, a yellow hat with a green band, and his bib is also yellow with green piping. His base is also a white cloud.

If you’re a collector of snow globes or carousels, this is for you! At the Wonderground Gallery at Downtown Disney, we found this sweet snow globe from the Carousels Around the World Collection.

The base of the snow globe is decorated in varying shades of blue, and trimmed in gold. Around the top half are various crests, including one with a “D” for Disneyland. On the front, between the crests, says “Disney Carousels” in pink, and around the middle, written in cream, is “Carousels Around the World.” The lower half of the base has a ring of decorative white dots and gold scrollwork. The snow globe rests on three gold button feet.

The inside of the globe features a white galloping horse with a red and pink seat, red reins, purple and gold saddle, and a multi-colored tassel dangling from a blue strap.

Topping the snow globe is the dome of the carousel. It is regally decorated in large blocks of cream, powder blue, rose, and gold. The dome is capped with a rose-colored crown with gold accents, and the base is trimmed in gold, blue, and purple.

When you shake the snow globe, small gold disks swirl around the galloping horse and gently fall back down.

Are you buying any of this attraction-related merchandise for yourself or as a gift? Let us know in the comments below.