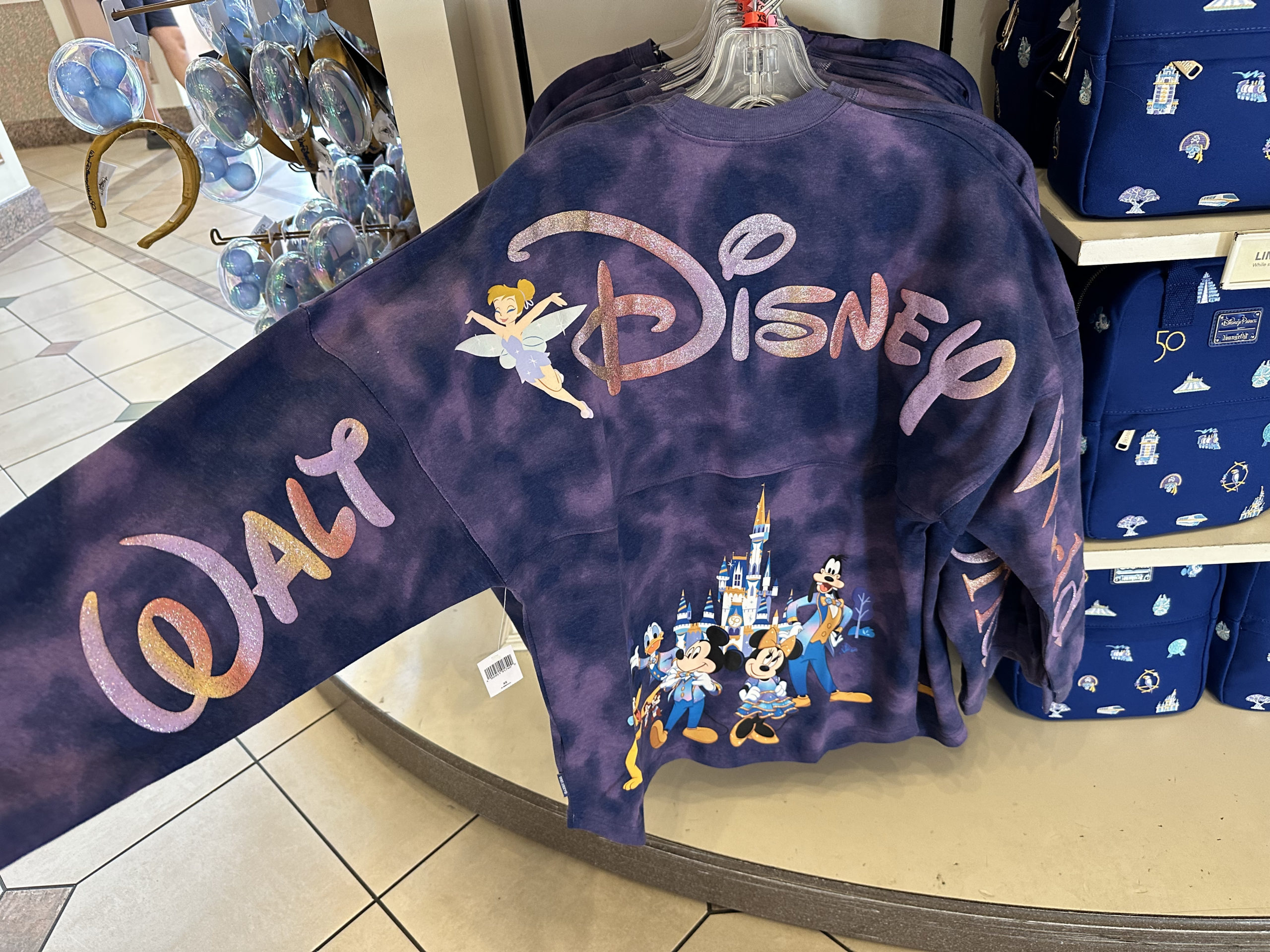 Good morning! We are back in Magic Kingdom today. We’re planning on doing some shopping and enjoying the park. We’re also planning on hopping over to Disney Springs later because the new National Geographic store has opened in Marketplace Co-Op. Let’s get started at the Magic Kingdom!

It was a picture perfect morning in Magic Kingdom. The crowds were light because there is a Mickey’s Not So Scary Halloween party tonight.

While shopping in the Emporium this morning, we noticed the price of shoulder plushes have increased. The shoulder plushes were $19.99 and are now listed as $24.99, which seems to align with the price increases we have been seeing at the Magic Kingdom and throughout Disney World property.

We spotted a new 50th anniversary tie-dye spirit jersey in the Emporium. The spirit jersey is a purple tie-dye design and features Mickey Mouse, Minnie Mouse, Goofy, Chip and Dale, Donald Duck, Pluto and Tinkerbell. “Walt Disney World” is found on the back of the spirit jersey.

More Disney x Ann Shen collection has arrived in the Emporium. We found “The Aristocats” candle holder by Ann Shen. This was previously found in Disneyland and is now at the Magic Kingdom.

We also found “The Aristocats” lantern by Ann Shen. The lantern features a cut-out and image of Marie. And a set of 2 tea cups and saucers.

On our way around the park we noticed TRON Lightcycle Run was doing testing with dummies inside the ride vehicle.

The cost of brown light-up souvenirs has also increased. Brown was previously $30, and has now increased to $32. These are part of the price increases that have hit Walt Disney World this week.

On our way out of Magic Kingdom we waved goodbye to Mickey and friends on Mickey’s Celebration Cavalcade.

We hopped over to Disney Springs to check out the new National Geographic store. But first we are going to do a little shopping in World of Disney.

In World of Disney, holiday merchandise is starting to arrive. We found this 12 days of Christmas box of surprises. The box is filled with different accessories to celebrate the holidays.

According to the mural in the store, “Every purchase helps support the global nonprofit National Geographic Society in its work to protect and illuminate our world through exploration, research, and education.” There is a QR code on the merchandise that explains more about the nonprofit.

The collection is inspired by the ocean. According to the sign, “This new National Geographic collection inspires the explorer in everyone while supporting real impact work designed to protect marine habitats and combat threats like ocean pollution and climate change.”

There were many new National Geographic apparel items available to purchase including, jackets, sweatshirts, sweaters, pants and t-shirts.

We thought this penguin 1/4 zip-up jacket was so soft and cozy. This jacket features two king penguins. We also found out that this item is made with recycled materials.

There were many other items available besides apparel. We found this stainless steel water bottle inspired by the ocean.

There is also a National Geographic Kids section in the store. Here you can find many different activity kits to choose from for your “explorers in training.” According to the sign, “National Geographic Kids products stimulate the curiosity of little explorers and aim to inspire the next generation of scientists, explorers and wildlife defenders. Every product is the starting place for an adventure and makes it fun for kids to learn about the world.”

There was even National Geographic magazines you could browse and a seating area to view them in the store. Will you be visiting this new addition to the Marketplace Co-Op on your next visit to Disney Springs?