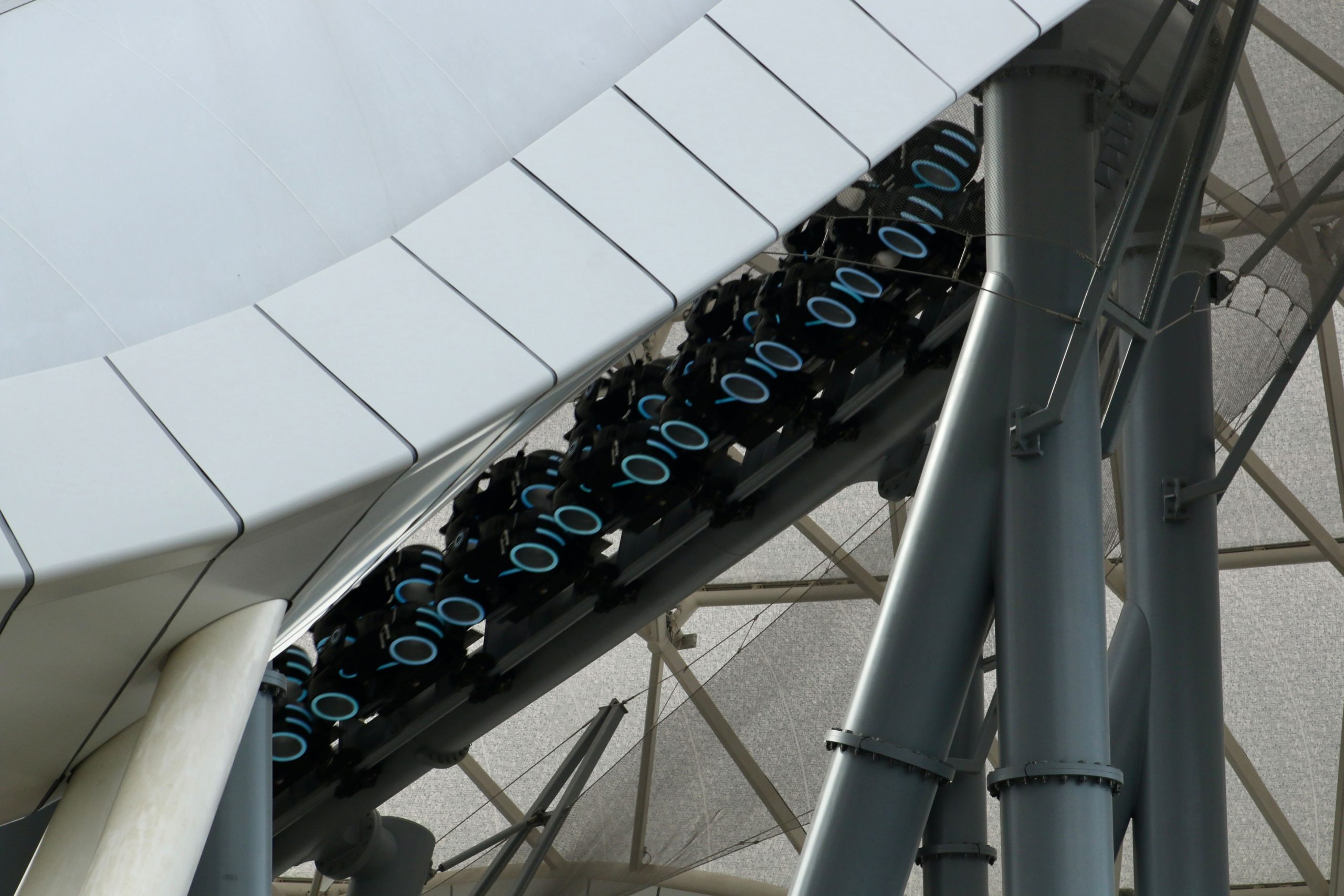 We’re still a ways away from spring 2023, but that only means that things are speeding up at the site of TRON Lightcycle / Run in the Magic Kingdom!

From the Tomorrowland Transit Authority PeopleMover, we could see construction workers on the tracks of the Walt Disney World Railroad, where preparations are still underway for its eventual return.

Meanwhile, with the walkways already being paved, the area has come a long way in recent months.

Roller coaster trains could be seen racing along the track as testing continues.

The square arch on the side of the entrance still remains covered in its green weather-proof sheathing.

Though it’s hard to spot from the PeopleMover, we could catch a glimpse at the locker building, which features an archway vaguely resembling a Recognizer.

An excavator was being operated beneath the PeopleMover track as a new walkway continues to develop.

A flat rail car carried what appeared to be railroad ties.

Moving around to the Tomorrowland Light & Power Co., scaffolding is up, focusing on the upper portion of the rear of the building.

The roof still has an exposed gray look, while much of the spaces between the doorways are still covered in black sheathing.

A cherry picker is parked near the back.

From the queue of The Barnstomer, a green cherry picker was up, lifting up a pair of workers, who were working on the overhang of the locker building.

Next to the railroad tunnel that runs beneath the attraction, several large, white pieces are in place.

From here, we can also get a better look at the Recognizer-like structure.

The bottom is wrapped in a clear plastic.

Above, after months of being done at night, daytime testing was being done on wheel lights. They were running two trains at a time, thirty seconds apart. While the timing wasn’t consistent, there were about one to two minutes between between running trains. No audio was being tested at this time, though it has been heard previously. Each train had weights to approximate how it would run with guests riding. One train was fully lit, while the other just had only the front Lightcycle lit.

Last month, it was confirmed that TRON Lightcycle / Run would open sometime in spring 2023.