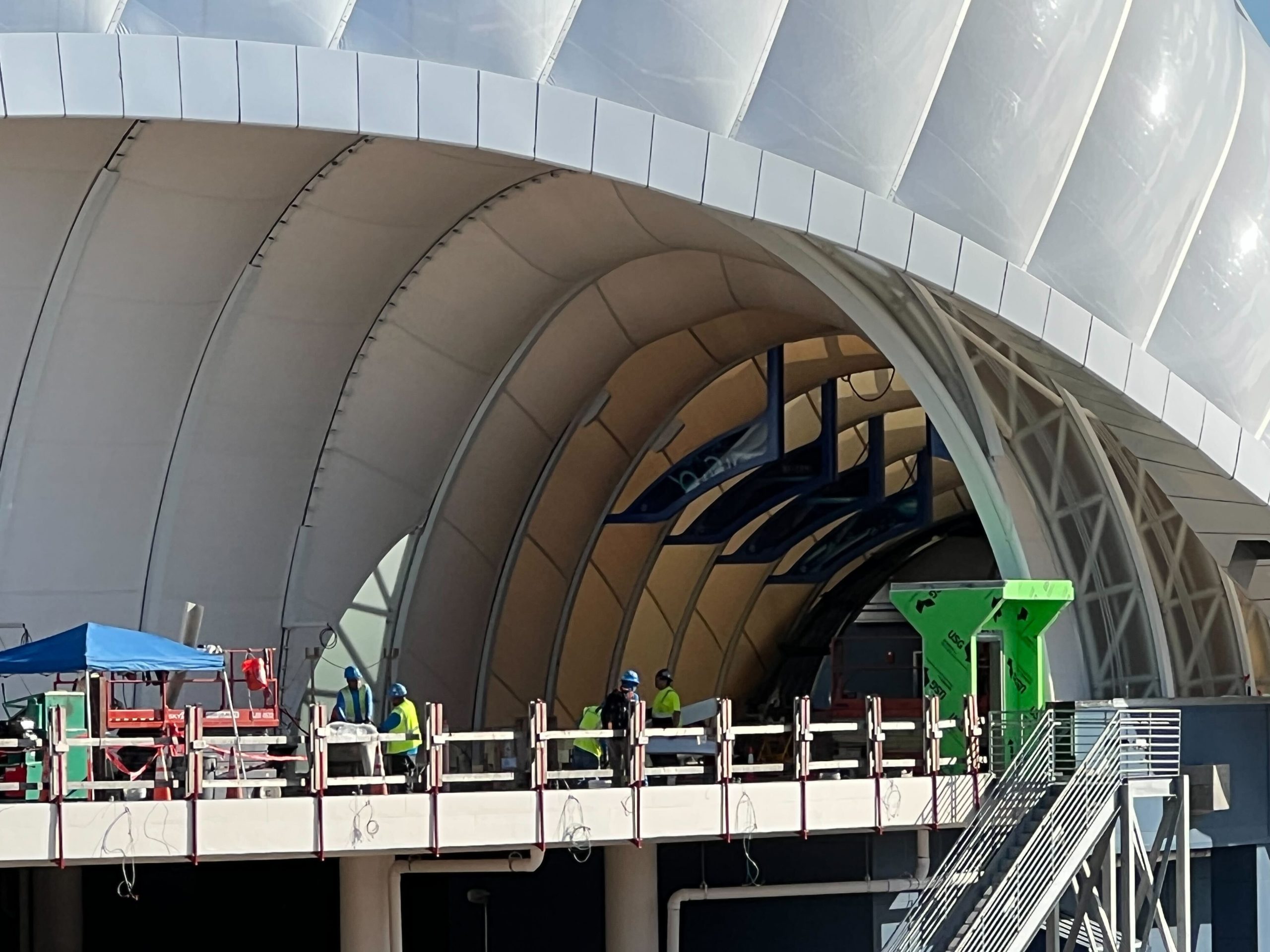 More themed elements have been added above the entrance to TRON Lightcycle / Run, still under construction in Tomorrowland at Magic Kingdom.

The lockers building has a square archway entrance.

A piece of wire hangs from above the entrance, likely for a future light-up sign.

The elevated walkway still has temporary wood railings around most of it.

Some metal columns have been added periodically along the railings.

The Walt Disney World Railroad will go beneath TRON Lightcycle / Run through this tunnel.

New curved concrete walls jut out from the elevated walkway around the tunnel entrance.

From the Tomorrowland Transit Authority PeopleMover, we can see progress on the coaster’s entrance.

The entrance canopy is nearly complete. This smaller canopy is beneath the large one that covers the entire exterior of the coaster.

The new dark pieces hang from sections of the entrance canopy. There are eight in total, four on each side.

The pieces have images of the TRON Lightcycles on them. They are similar to the signs hanging above the entrance to TRON Lightcycle Power Run in Shanghai Disneyland.

Note the entrance in Shanghai Disneyland also has ceiling fans and railings dividing the line, which have not been installed in Magic Kingdom yet.

A square arch has also been installed to the side of the entrance. It is not yet covered in paneling, so its green weather-proof sheathing is exposed.

Closer to the PeopleMover track, crew members continue working on the sidewalk leading to the elevated walkway.

Large sections of pavement have been installed, with trenches between them that will be filled in later.

Some permanent railings are visible on the elevated walkway beneath the canopy.

There are a few planters still filled with nothing but dirt.

Trains will emerge from the tunnel on the Tomorrowland side.

There are already lights and rails inside the tunnel, but tracks have not yet been laid directly outside.

Tracks are also still missing from this stretch of rails next to Space Mountain.

Crews have also been working on a walkway beneath the PeopleMover track.

It is now completely paved.

Work continues on the exterior of Tomorrowland Light & Power Co., which will operate as both the Space Mountain and TRON Lightcycle / Run gift shop.

While some weather-proof sheathing is still exposed, the exterior has been mostly cleaned up since the decorative towers were removed.

Guests will walk past the shop to reach TRON Lightcycle / Run, so the sidewalk has been opened up slightly.

We previously saw frequent work on the corner at the front of the building, but it looks like this is now completely reconstructed.

Sections of the exterior will need to be repainted.

The store remains closed, with guests exiting Space Mountain next to its entrance while the interior is refurbished.