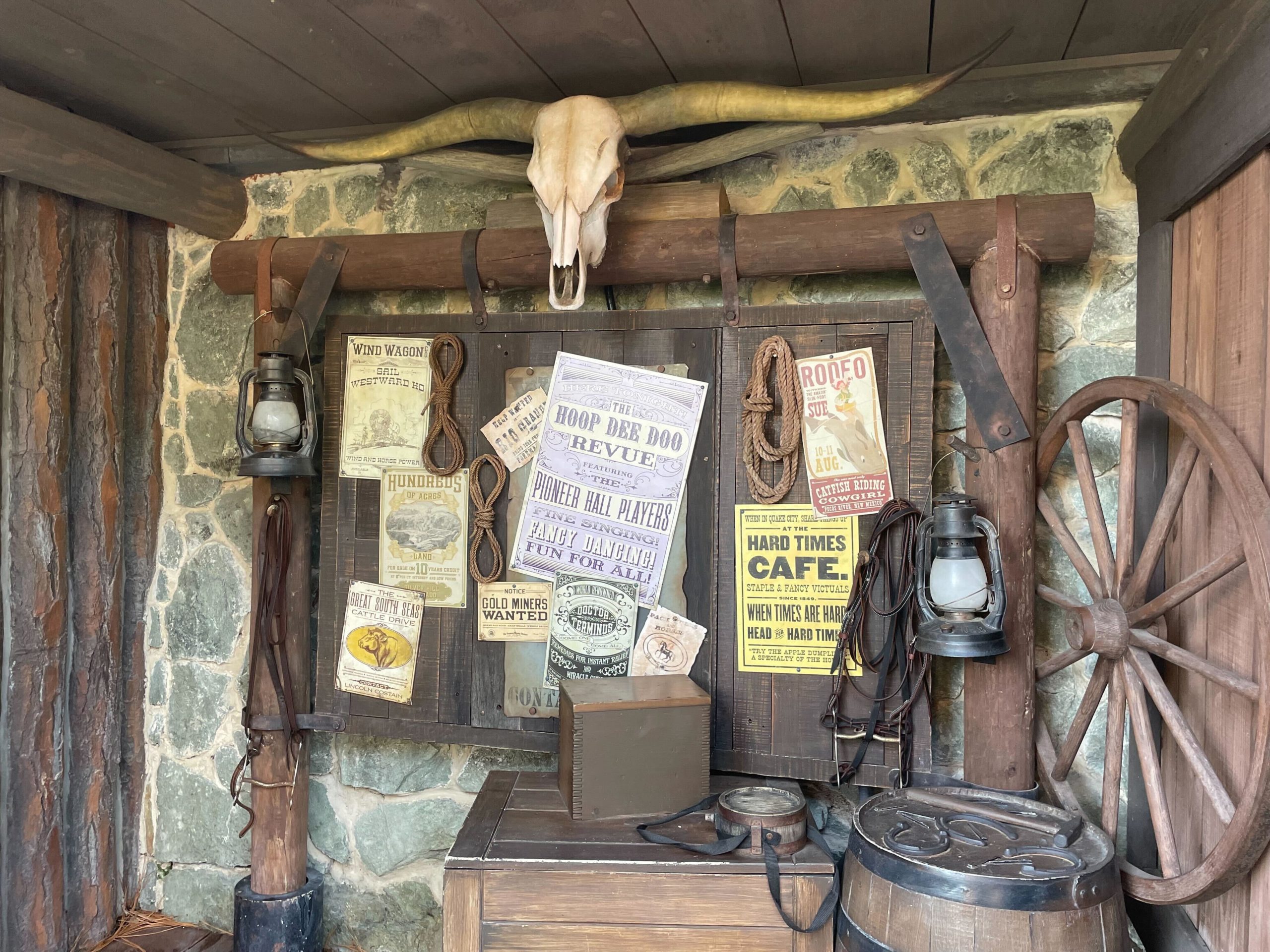 Lovers of Disney’s westerns will want to “giddyup” to Frontierland in the Magic Kingdom where a bulletin board has been erected! This has been around for a bit now, but we wanted to take a closer look at all the “Easter eggs.”

The board replaces a former Sorcerers of the Magic Kingdom portal, which was removed in May 2021. Below, you can see how it used to look:

This board is packed with references to Disney’s western films, along with another beloved location at Walt Disney World. Let’s mosey on down memory lane and see what we can find!

This advertisement for the Hard Times Cafe in Quake City pays tribute to the setting of 1975’s “The Apple Dumpling Gang.” It even lists an apple dumpling as “a specialty of the house!”

This ad actually references two films: “Westward Ho, the Wagons!” from 1956, and the animated short “The Saga of Windwagon Smith” from 1961. Westward Ho is also the name of a food cart here in Frontierland which serves treats like Wendell’s Bear Claw as well as drinks.

Though you can’t shop here, there’s still a crate and barrel… and a wagon wheel, and a lantern. What there isn’t, however, is the keyhole from the former interactive game.

This poster lets us know that The Hoop-Dee-Doo Revue is in town, featuring the Pioneer Hall Players. Of course, if you actually want to see the show, you’ll have to get out of town… and head to Disney’s Fort Wilderness Resort & Campground.

If you’re looking to do some ranching in an exotic locale, check out The Great South Seas Cattle Drive led by Lincoln Costain, the lead character of 1974’s “The Castaway Cowboy.” South Seas has also been used for a number of other Disney properties, like the club in “The Rocketeer” and a former shop at Disneyland.

When the rodeo comes to town, Slue-Foot Sue will be there riding a catfish… and catching the attention of Pecos Bill, as seen in the 1948 animated film “Melody Time.” Slue-Foot Sue also formerly hosted dinner shows at The Diamond Horseshoe.

Look out, Elliott! Doctor Terminus is around, and he’s selling his “remedies for instant relief” and “miracle cures.” He caused quite a bit of grief for the heroes in “Pete’s Dragon” from 1977. To the left is a poster asking for gold miners at the Big Thunder Mining Company.

Finally, you can get in on a land rush in Silver Hill, Colorado. But you might want to trade your horse in for a snowmobile, as it’s the setting of the 1972 comedy, “Snowball Express.”

Which reference is your favorite? Sound off in the comments!

REVIEW: Pork Belly, Tuna Tataki, and Grapefruit Tart All Shine at The Citrus Blossom at the 2022 EPC...March 3, 2022
REVIEW: Chocolate Popcorn with Red Crait Salt and Strawberry Banana Outpost Mix Return to Kat Saka's...January 18, 2022
REVIEW: The Delectable Oi-Oi Puff Returns to Docking Bay 7 for May the 4th at Disney's Hollywood Stu...May 4, 2022