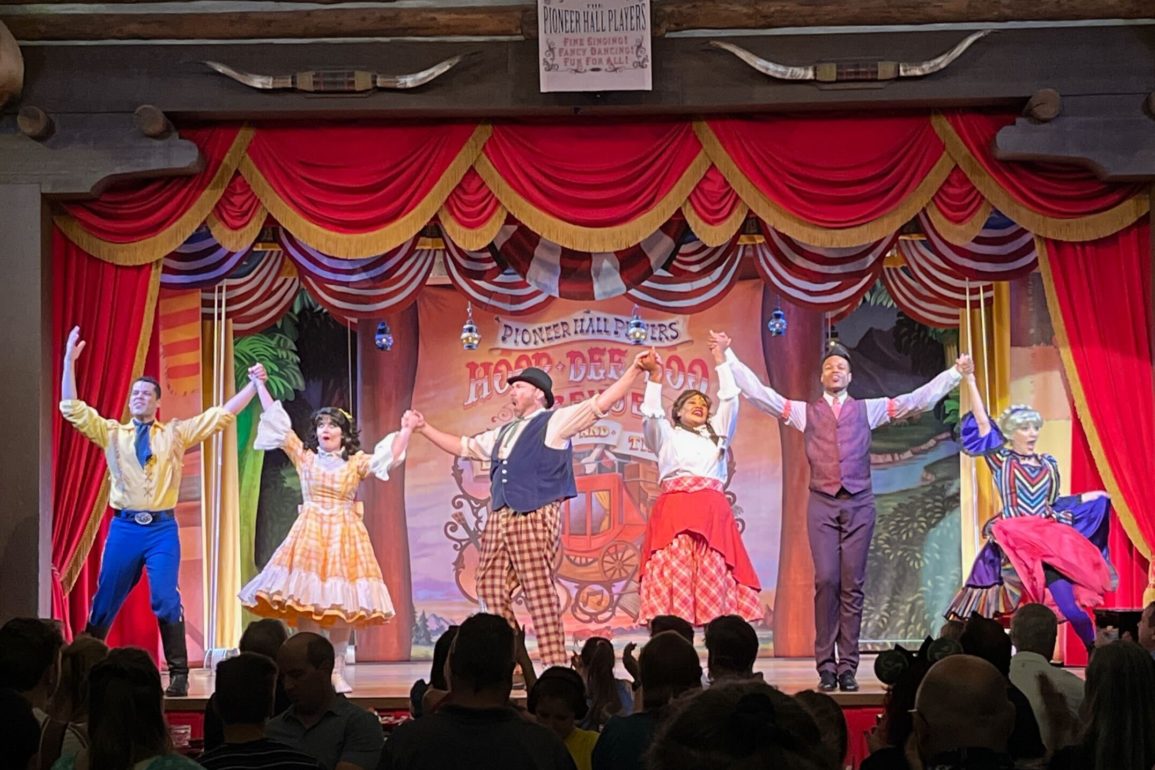 The “Hoop-Dee-Doo Musical Revue” has returned to Disney’s Fort Wilderness Resort at Walt Disney World after two years. And of course, we were there for the very first show. You can watch the full hour-long show below, and keep scrolling to read our review of the entire experience.

Check-in is located at the former Disney Vacation Club kiosk, across from Pioneer Hall. Doors open at the posted time, but check-in opens 30 minutes early and is also available on the MyDisneyExperience app.

Kids get to ring the bell before guests enter Pioneer Hall.

“Hoop-Dee-Doo Musical Revue” is inside Pioneer Hall, with a mostly wooden interior and chandeliers. Most guests sit on the main level — the more expensive seating area — but there are balconies on the second level too.

Pricing varies depending on where you choose to sit. It starts at $66 for adults and $39 for children ages 3 – 9. Read more about showtimes and pricing.

The entire hall has been refurbished during the show’s downtime. With new audio and lighting systems, it feels refreshed but continues to keep its original charm. Before the show starts, a red curtain hangs in front of the stage.

There are new tables and chairs as part of the refurbishment. The plates are red and the cloth napkins are checkered red and white. Tables are set before guests are seated, with cornbread, salad, and shareable barbecue sauce ready to eat.

We already noted that the food is no longer served in signature buckets and comes in skillets instead.

The cornbread is one of the highlights of the meal, with a moist and rich texture. If it’s not rich enough already, there’s plenty of butter provided.

The greens were bright and crunchy. The tomatoes and cucumber also had a good crunch. The dressing was sweet and slightly tangy. We enjoyed this and kept going in for more.

The cabbage of the coleslaw was also nice and crunchy. The dressing was slightly watery, but it wasn’t bad.

It was mildly seasoned. It wasn’t the table’s favorite item but it’s a staple of the BBQ lineup.

These are pretty standard fare for southern food at Walt Disney World. They’re a bit thick and criminally underseasoned, however.

We could taste the brown sugar in these baked beans. They were slightly sweet and had a good seasoning although the sauce was a little thick. We liked it.

This is one of the new items introduced and was heavily publicized with the return.

In spite of this, it’s one of the most forgettable offerings of the entire meal. It’s a creamy, standard macaroni and cheese with a hard, flavorless cornbread crumble. It would be simply okay without the crumble, which adds no flavor and instead just gives a texture to it for no reason.

The fried chicken continues to be the best at Walt Disney World. As advertised, the exterior is nice and crispy, but the interior is moist and flavorful in every single piece. Breasts, wings, and thighs are all served.

We’ve never found a portion of ribs at Walt Disney World that we enjoyed. These were insanely dry, and unfortunately, no amount of barbecue sauce could save them. If we had to describe them in two words, we’d call them charred and bristled.

This is brilliant in its simplicity. There’s nothing extraordinary about the recipe or what they did here, but it remains one of the best desserts in all of Walt Disney World. It’s what you would expect it to be: moist cake with sugar embedded, sweet whipped cream, and a healthy serving of strawberry sauce. This was worth the trip to Fort Wilderness alone.

Naturally, options are available for both gluten-free and vegan diners. The appetizers served upon seating for both are the same.

An alternate cornbread is provided with both standard and artificial butter. This cornbread is made without gluten or egg, making it both gluten-free and vegan.

Unlike the regular salad, the standard salad has no cheese.

Coleslaw is also served with the appetizers.

The gluten-free meal eliminates the potatoes and beans, instead opting for steamed chicken, ribs, and macaroni and cheese without the cornbread crumble.

One upshot of the gluten-free meal is the macaroni doesn’t come with the cornbread crumble we so despised. It’s standard fare otherwise, certainly edible but nothing special.

As with the standard ribs, these were tough and dry with very little meat, and join the ranks of bad ribs across Walt Disney World.

The baked half-chicken was wonderful for what it was. Although it has very little seasoning (part of the gluten-free bundle), it’s well-cooked and retains its juicy, natural flavor. These aren’t cooked to order, but it’s still fresh enough for us.

The plant-based/vegan menu goes in an entirely different direction. It comes with Beyond sausage (although the menu does say Impossible, Cast Members were insistent that it was Beyond), green beans, baked cauliflower, roasted potatoes, baked beans, and jackfruit barbecue.

The weakest part of this meal for sure was the entree. We were extremely disappointed in the jackfruit barbecue, with a highly unpleasant flavor and an almost distressing texture. We would’ve rather had tofu barbecue than this, to be frank, and that says a lot.

The corn was just that — corn. No butter or seasoning of course, but it was still perfectly cooked. We did thoroughly enjoy the baked beans as well, with a delicious barbecue flavor that didn’t betray its vegan/plant-based nature in the least.

But our favorite on this plate by far was the green beans, perfectly cooked and with a delicious hint of garlic similar to those found at Cape May Cafe in Disney’s Yacht Club Resort. We ordered a second helping specifically of these just because they were so good!

The roasted potatoes were pretty standard, again with little flavor or extra seasoning. They were slightly overcooked, but not enough to ruin them.

Both the gluten-free and vegan meals get the same strawberry shortcake, which is brought out separately from other guests’. That may be for the best, because although it contains the same strawberry sauce used for the standard version, the cake itself is hard as a rock, near inedible. What we could eat was utterly flavorless, a disappointing end to an otherwise satisfactory meal.

Regarding the bottomless alcohol, it’s enjoyable enough. These drinks won’t be life-changing, but they’re certainly good for what you paid.

There’s absolutely no reason to order this when there’s bottomless beer and sangria. It’s mostly an Arnold Palmer, and not a very good one at that. This drink is very syrupy, leaving an unpleasant taste.

The show is, for the most part, what you remember. There have been some very minor changes for cultural sensitivity reasons. Despite the modifications, it remains true to its original intent and keeps all of its nostalgic feelings.

You can check out the video of the full show including a list of changes here on WDWNT.

The Hoop-Dee-Doo Musical Revue remains one of the quintessential, classic Walt Disney World experiences in an era where so few remain. It thankfully has survived the COVID-19 closure with no budget reductions, and is as good as it has ever been. Some of the food is great, and some of it is so-so. But between the fantastic performances and the bottomless alcohol, it’s impossible to have a bad time.

We would highly recommend the Hoop-Dee-Doo Musical Revue to both returning guests and new alike, especially those who’ve never seen it before.

Previous
‘Back to the Future: The Musical’ Traveling to Broadway in 2023