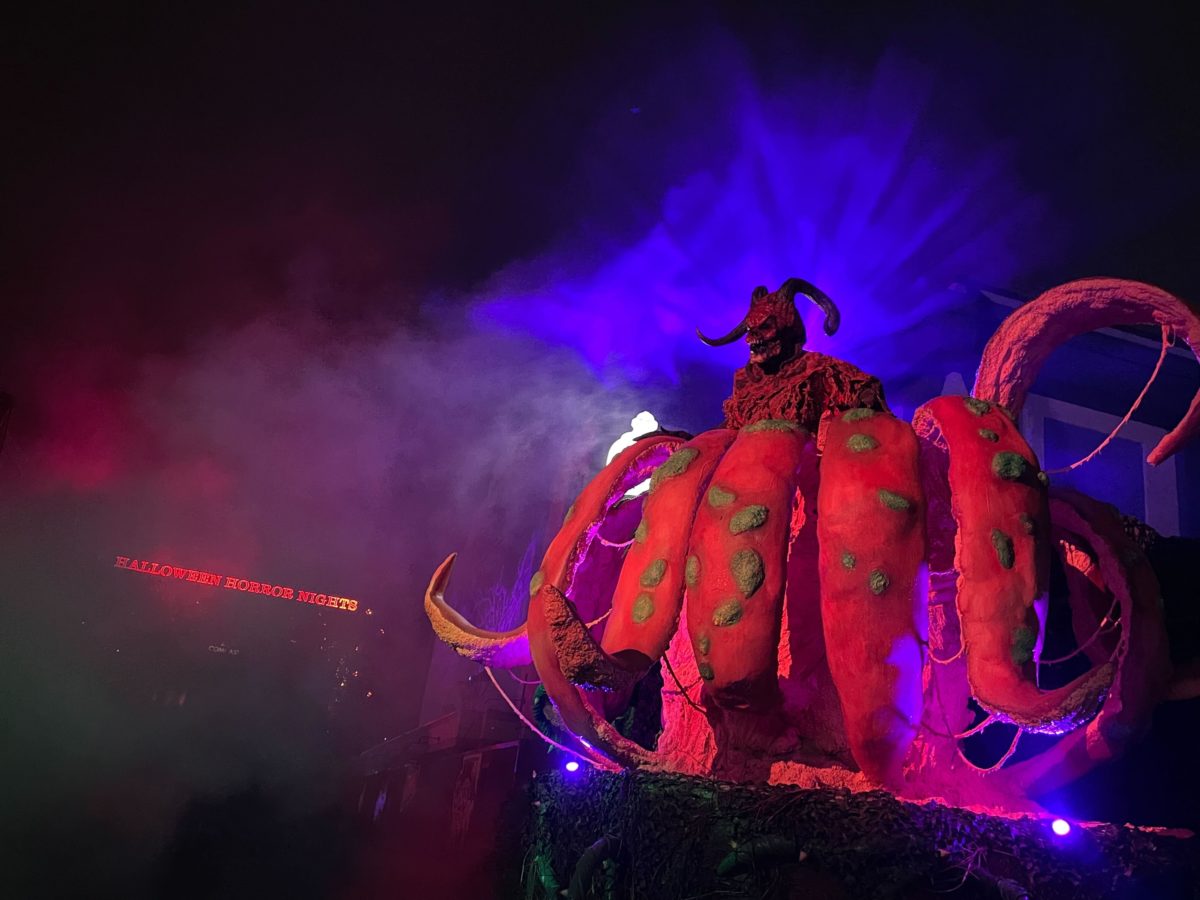 After hosting his own haunted house last year, the Pumpkin Lord is back for Halloween Horror Nights 31, this time in the Horrors of Halloween scare zone.

The official description reads, “The Pumpkin Lord, the spirit of Halloween, has taken over this year’s event, summoning hordes of fiendish creatures. Terror has taken root.”

This scare zone is a sequel to the 2021 house The Wicked Growth: Realm of the Pumpkin, which ended with the rise of the Pumpkin Lord. He gained many followers last year and has grown in power.

Like the last few years, the Avenue of the Stars scare zone serves as a “table of contents” or preview for the rest of the event. However, the powerful Pumpkin Lord has overtaken the zone with thick vines and pumpkin minions.

The Pumpkin Lord has not been named as an official icon, but in a fashion similar to previous backstories, he has summoned the witches, scarecrows, trick or treaters, and more to the streets.

Don’t get too close. His burps need a splash zone warning.

Succubae can be found here, just like last year’s 30 Years, 30 Fears zone. The succubae have had essentially the same design since their 2003 debut, though this year’s outfit is slightly different.

The overgrown decorations are featured in vine-covered set pieces. This piece, representing Conjure the Dark, has a cauldron and witch hat on top.

Buried in the growth is a Voodoo doll, a skeletal arm, potion bottles, brooms, and more.

The neon Halloween Horror Nights sign beckons guests into the terrors within. The sign returned last year for the 30th anniversary after being absent for many years.

“31” is on the wood fence at the front of the zone. It makes a good photo op in the daylight, but it’s barely visible after dark.

The fog and the neon lighting play against the glow of the many jack-o’-lanterns for an eerie entry.

Many pumpkins from the façade for The Wicked Growth can be spotted above the zone, including Lil’ Boo.

The block representing Scarecrow: Cursed Soil has (surprise, surprise) a scarecrow on top.

A corn husk doll is wrapped up in the vines.

So is a skeletal arm, sickle, and more.

Be warned that stopping to take in the details makes you perfect bait for a Scareactor.

A rusted, bloody cleaver is ensnared.

This scare zone sets the tone for the event with the Pumpkin Lord welcoming you in. The loud music and the smell of fog do help build up the excitement of the event, so it’s the best zone to walk through to start the night. Unfortunately, it’s also best at night, so if you enter the park right when the event opens, it may not be as enjoyable.

Each scare zone is represented here, so you’ll typically find at least one Scareactor from each of the other zones. This isn’t really scary, and it’s a small zone, but it does give us a chance to see the Pumpkin Lord and Lil’ Boo again. Plus, we love the vibes.

Watch our walkthrough of Horrors of Halloween below.

Horrors of Halloween is at the Avenue of the Stars at the front of the park.