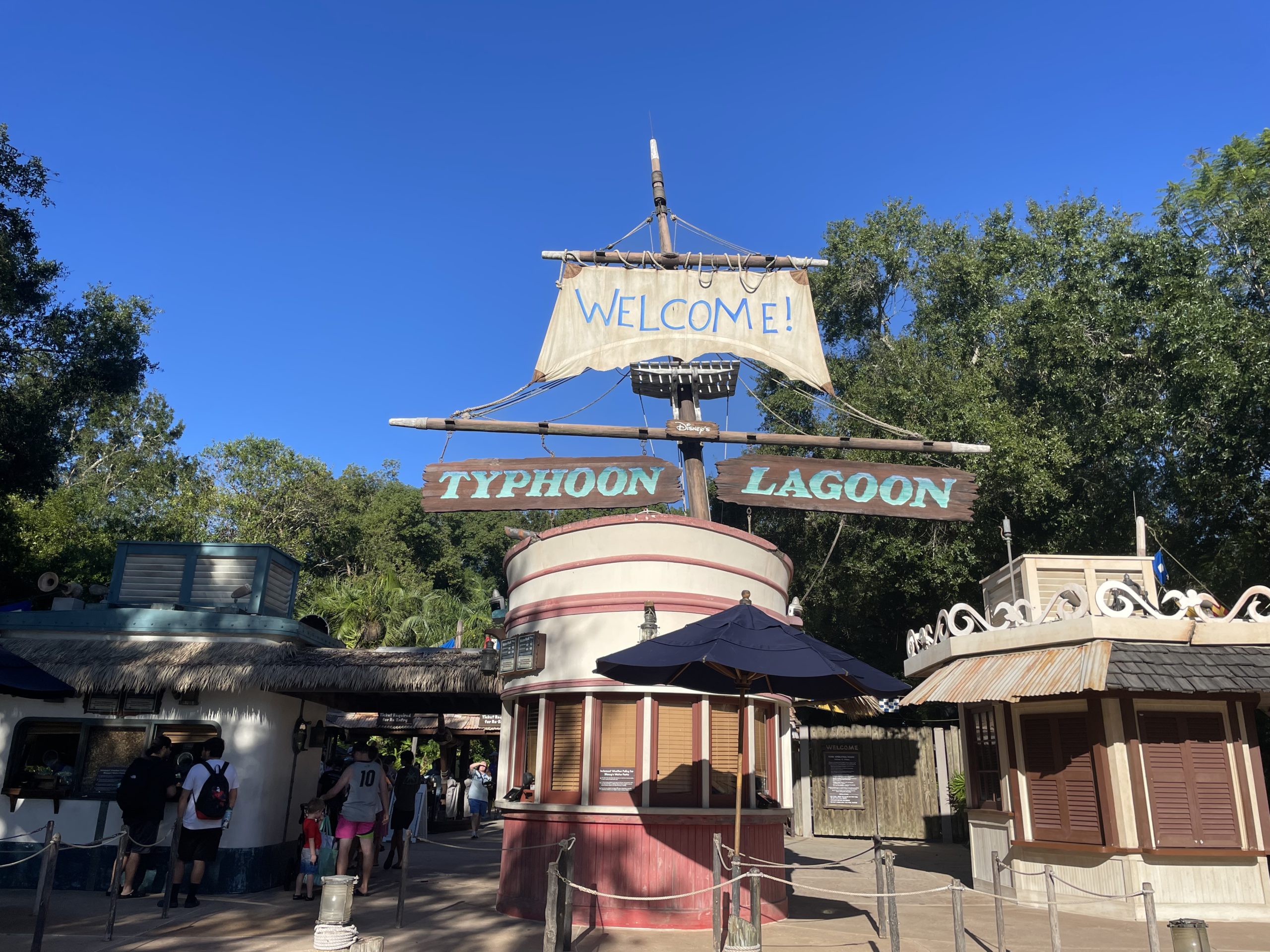 When I first saw the announcement for annual passholder perks coming to Disney’s Typhoon Lagoon, I was ready to pack the pool bag, jump in the car, and splash into the fun. So, on the first Sunday in October, I was excited to bring my family and enjoy my favorite park with added perks. Unfortunately, I was let down.

Passholders’ perks included a 45-minute early entry, one free towel rental per passholder, and three exclusive drinks available for purchase. If you do not have water park access added to your annual pass, you can purchase a 1-day ticket for $49 plus tax. That’s $20 off the original price. These “perks” are only available on Thursdays and select Sundays in October. That’s less than 10 days.

When we arrived, we entered through the early entry queue. Cast members were scanning our passes to double check we were annual passholders.

Once you tap in, a cast member places a V.I.Passholder event wristband on your wrist.

We were walked past the lockers and around the back, by Crush n’ Gusher, then past Miss Adventures Falls, past Typhoon Tilly’s, over a bridge above the Lazy River, and to the far right side of the Surfin’ Pool. 90% of the water park was still closed off to early entry guests. This is consistent with early entry at Magic Kingdom, where Adventureland, Frontierland, and Liberty Square do not open until the park opens.

The farthest right side of the Surfin’ Pool was our only option to choose seating from. I’m assuming this is because of staffing. Originally, we were excited to jump into the Surfin’ Pool, but it was closed for lifeguard training.

We had plenty of seats to choose from, some under umbrellas. Only about 10 guests, not including my family of four, were taking advantage of the early entry.

We got sunscreen applied, and the water case for our phones, and then we realized we didn’t get our free towel rental. You have to ASK FOR IT; they are not being handed out. We began our trek back around to Singapore Sal’s to ask for our towels. We asked a cast member, she checked our wristbands and handed us our towels, and we were on our way.

With 30 minutes left of Early Entry, I wanted to ride some water slides and raft rides. Well, you get one to choose from — Miss Adventures Falls. Again, I’m going to assume this is because of staffing. Since it’s the only ride open, we were able to ride it multiple times.

Only one more “perk” left to try out, exclusive passholder drinks at High n’ Dry. Of course, we purchased and tried all three. While they were tasty beverages, they aren’t really a perk. You still have to purchase them.

Overall, these passholder perks are lacking. These perks are only available two days a week (some weeks). Why not just make it every day for the month of October? A 45-minute early entry is great, in theory. You can get a great seat, in a designated area, and hop on one raft ride. It’s 15 minutes longer than the theme park early entry. Maybe they should have opened another ride, or even, a section of the water park. Personally, I feel like the free towel rental should be easily accessible.

The drinks were delicious, but one of those could have been free. Back in 2002, annual passholders had a whole lounge at Disney’s Animal Kingdom, where you were able to get free sodas and water. Disney’s Typhoon Lagoon passholder perks aren’t anything to brag about, and nothing to go out of your way for. It feels like another money grab. A way for Disney to get you to buy a 1-day ticket, buy some drinks, and lunch if you’re staying all day.

Will you be going to Disney’s Typhoon Lagoon for the passholder perks? Let us know in the comments.