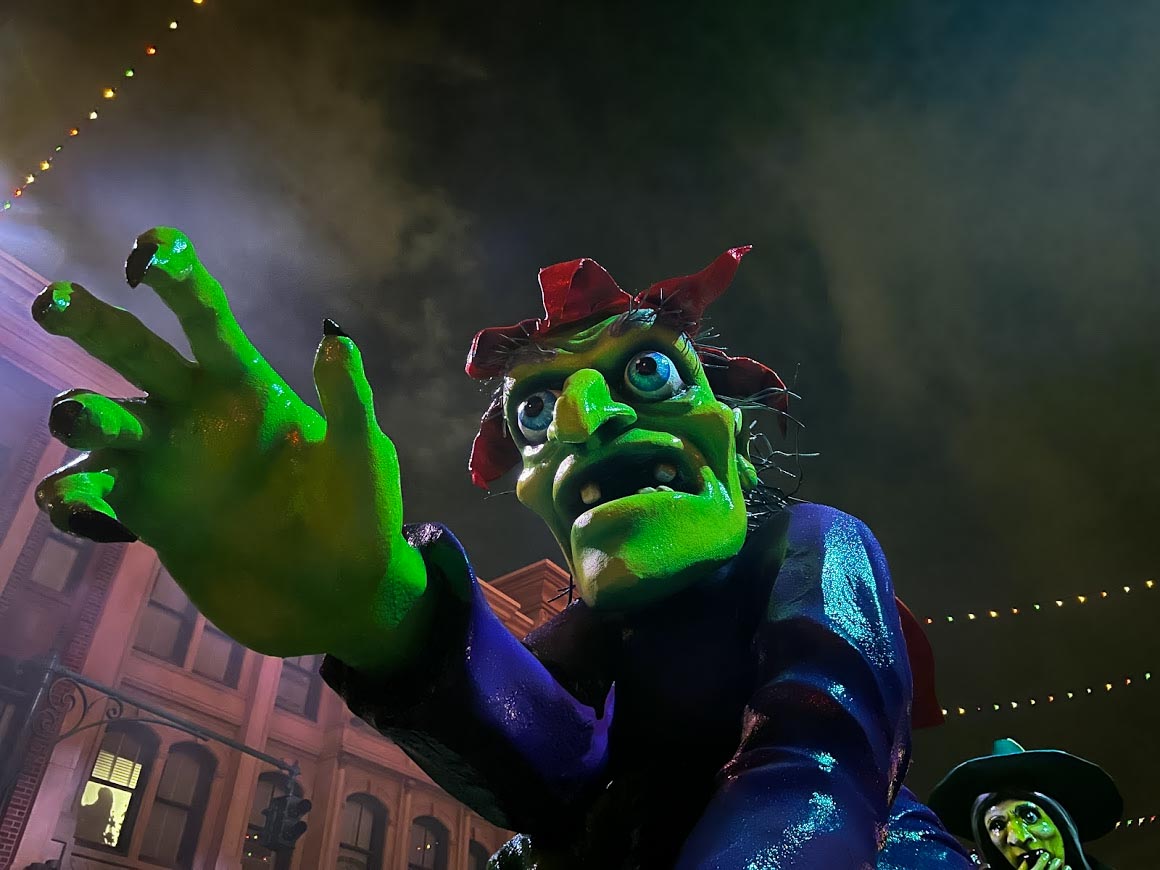 Sweet Revenge is a scare zone at Halloween Horror Nights 31 that, for the first time, includes the Tribute Store in its backstory and experience.

The official description reads, “The sweets from Major Sweets’ candy company have turned children into crazed killers. This Halloween’s all trick, no treat, and total mayhem.”

In 1939, the Tribute Theater’s owners mysteriously disappeared, leaving an office “inexplicably filled with candy.” The theater was transferred to the owners’ son, who killed several people with poisoned candy. Several years later, a new mayor came into town and bought the theater. The mayor renovated the theater to turn it into a Halloween dark ride, a main attraction for the annual Halloween festival. He also partnered with Major Sweets, a big candy company the next town over. Little did he know, Major Sweets is the son of the previous owner who poisoned patrons.

Now, it’s 1954, and the annual Halloween festival and parade are underway…

From the beginning of the event, Sweet Revenge has been one of our favorite scare zones. From the cheerful music to the bright lights, every detail of this scare zone pulls you into the theme of the local Halloween festival.

This scare zone ties in with the story of the Tribute Store, and you’ll be able to find Major Sweets roaming the streets, admiring his handiwork. The poisoned candy has taken its effect on the children of the town, and there’s mayhem everywhere. Kids in Halloween costumes can be found chasing and attacking the townspeople due to the poisoned candy, so stay alert.

The twisted trick-or-treaters are lurking in the crowd.

The town’s adults have not faired well.

Adults that have been attacked may beg you for help or a child on a tricycle may follow you down the street. We love a good story, and Sweet Revenge delivers.

To be fair, neither have the kids.

The Scareactors in this zone put on an excellent performance. This was our favorite people-watching zone, and not just to see guests run screaming. The Scareactors peppered in backstory and held in-theme conversations with each other, enhancing the immersion in the zone.

Maybe it should have been obvious to the Mayor that something wasn’t quite right with Major Sweets.

When the judges are in the booth, you may catch one of a couple mini-shows as they address the crowd (or get pulverized by a trick-or-treater).

The three parade floats are very cool, but this one in particular serves as a stage for another mini-show.

There are a couple of different mini-shows here as well, which is another reason this zone is a fun place to hang out and observe. Some of the shows are used to enhance the cast shift transition. One cast exits, clearing the chaos. In the show pictured above, the Mayor presents the key to the town to Major Sweets. The child on the left eats candy offered by Major Sweets, then quickly dispatches the Mayor as the chaos erupts (and the next cast enters the streets).

The parade floats were a partnership with the same company that Universal partners with for the Mardi Gras parade.

With the size of the crowds in the area, the scareactors do a great job of blending in and timing the perfect scare. Hiding behind parade floats or in plain sight, the scareactors in Sweet Revenge do an excellent job of scaring guests.

Sweet Revenge has taken over the streets of New York.