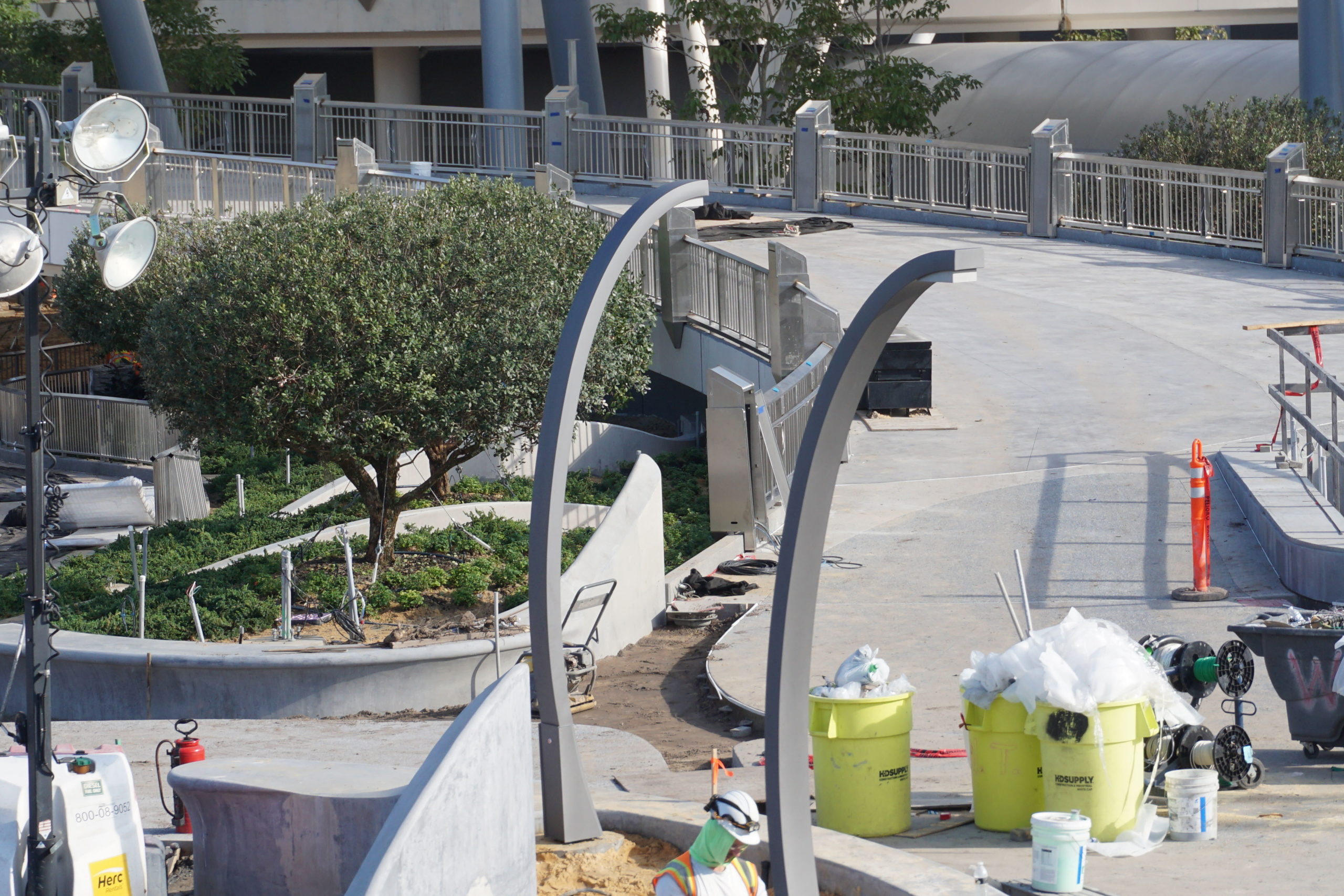 Let there be light. New themed lampposts have been installed near the entrance to TRON Lightcycle / Run in Tomorrowland at Magic Kingdom.

The curved lampposts are in the courtyard area between Tomorrowland Light & Power Co. and the coaster, near the elevated walkway.

They are silver, with small white sections pointing down at the top.

These two sit in one of the courtyard’s large planters.

A few posts also line the path that will lead under the elevated walkway to Storybook Circus.

Most of the courtyard has been paved and crew members continue to pave the Storybook Circus path.

Trees were recently planted in some of the planters and behind the walls that will separate TRON Lightcycle / Run from Tomorrowland Speedway. There is fresh grass on the ground around some of the trees, too.

Permanent railings have been installed around most of the elevated walkway, with wide silver posts every few feet.

Even more trees are between the walkway and the Walt Disney World Railroad tunnel. We saw crew members working on the tracks during our recent trip on the Tomorrowland Transit Authority PeopleMover.

Signs hang from the canopy above the coaster’s entrance. Though difficult to see at a distance, they feature images of the lightcycles and are almost identical to signs at TRON Lightcycle Power Run in Shanghai Disneyland.

We didn’t see much work happening on Tomorrowland Light & Power Co., but the exterior is looking much cleaner than it did a few weeks ago.

One set of doors was open, so we could see inside the store for the first time in over two months, but there wasn’t much to see.

The store is being refurbished to better match the theming of TRON, since it will act as both the new coaster and Space Mountain’s gift shop.

There are no reopening dates announced for Tomorrowland Light & Power Co. and Walt Disney World Railroad, but they are expected to open before or around the same time as TRON Lightcycle / Run next year.

From Storybook Circus, we saw something new in front of the lockers building.

A pole covered in plastic appears to be the height requirement indicator.

It could also be for other signage, however.

This concept art shows approximately what TRON Lightcycle / Run and the Walt Disney World Railroad tunnel will look like at night.

And this concept art includes Tomorrowland Light & Power Co., although the decorative towers visible in the art have been removed and don’t seem to be coming back.