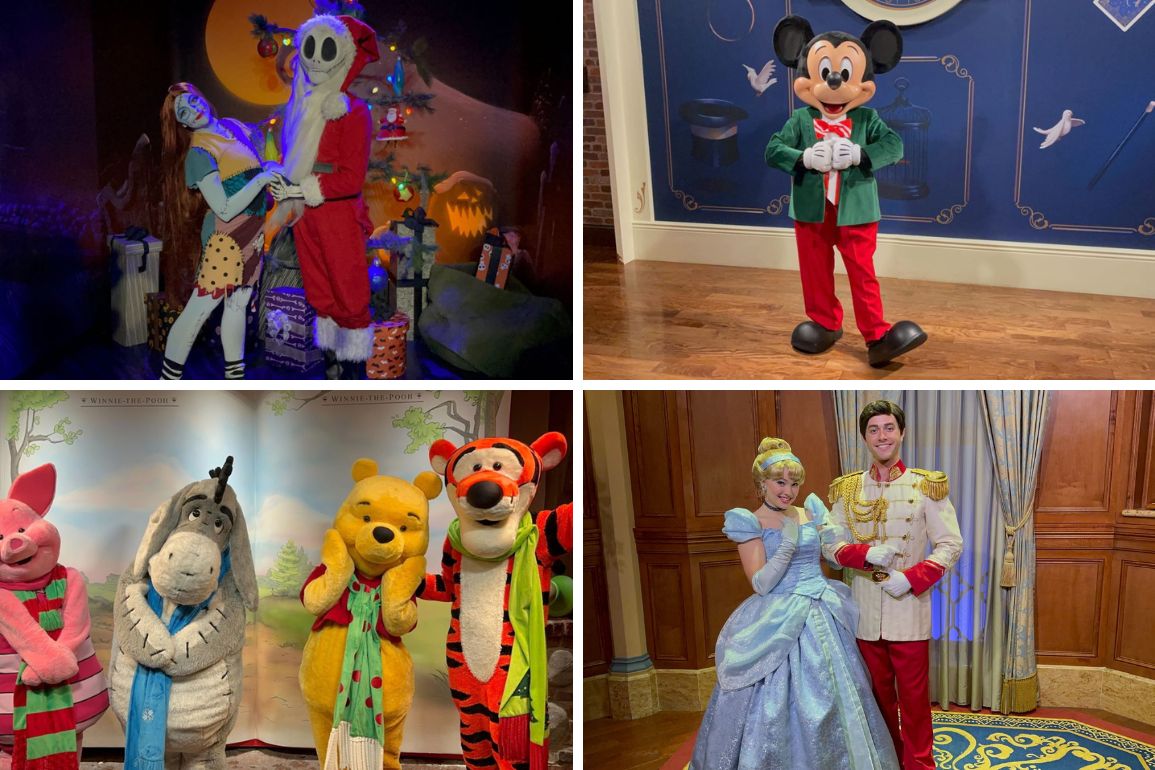 Mickey’s Very Merry Christmas Party has kicked off for the season at Magic Kingdom. To help you plan your evening, we’ve compiled all the character meet and greets at the event.

Mickey Mouse is saying “seasons greetings” in his usual meet-and-greet spot in Town Square Theater. Though, you will find him in his new Christmas costume.

He is dressed to impress in his three piece suit. His bowtie and vest are red and white striped like a candy cane. His green jacket really pops against his bright red pants.

“What’s this? What’s this?” It’s Jack Skellington as “Sandy Claws” and Sally!

The photo backdrop is perfectly themed for the “Nightmare Before Christmas” with a tree, presents, and even a jack-o-lantern.

Moana is saying “aloha” to guests in the queue of the Enchanted Tiki Room.

Big Al, Wendel, Liver Lips, and Shaker were hiding from the rain by Country Bear Jamboree. We were able to grab some hugs and dance with them.

Santa Claus is meeting at the gazebo behind Ye Olde Christmas Shoppe. His meet-and-greet spot is perfectly decorated for a family or group holiday photo.

Minnie and Daisy are greeting guests together inside Dumbo’s play area.

Donald and Scrooge McDuck are meeting with guests in Storybook Circus.

Santa Goofy joined the Disney Jr Jingle Jam to get out of the rain. He was dancing the night away with Vampirina and Fancy Nancy.

Belle is meeting in her cottage.

Cinderella, Prince Charming, and Elena of Avalor can all be found inside Princess Fairytale Hall.

Snow White and the Prince

Snow White and the Prince are located by Pinocchio Village Haus.

You can see Princess Ariel, with legs, and Prince Eric by the cartographer. It’s directly across from Ariel’s Grotto.

Winnie the Pooh and Friends

Winnie the Pooh, Piglet, Eeyore, and Tigger are out meeting guests in their adorable holiday scarves near The Many Adventures of Winnie the Pooh.

You can find Tweedle Dee and Tweedle Dum by the Mad Tea Party, unless it’s raining. If that’s the case, they will be under cover next to Cheshire Cafe.

Watch our video of the character greetings below.

REVIEW: New Dishes Elevate A Twist on Tradition Marketplace at the 2022 Festival of Holidays in Disney California Adventure