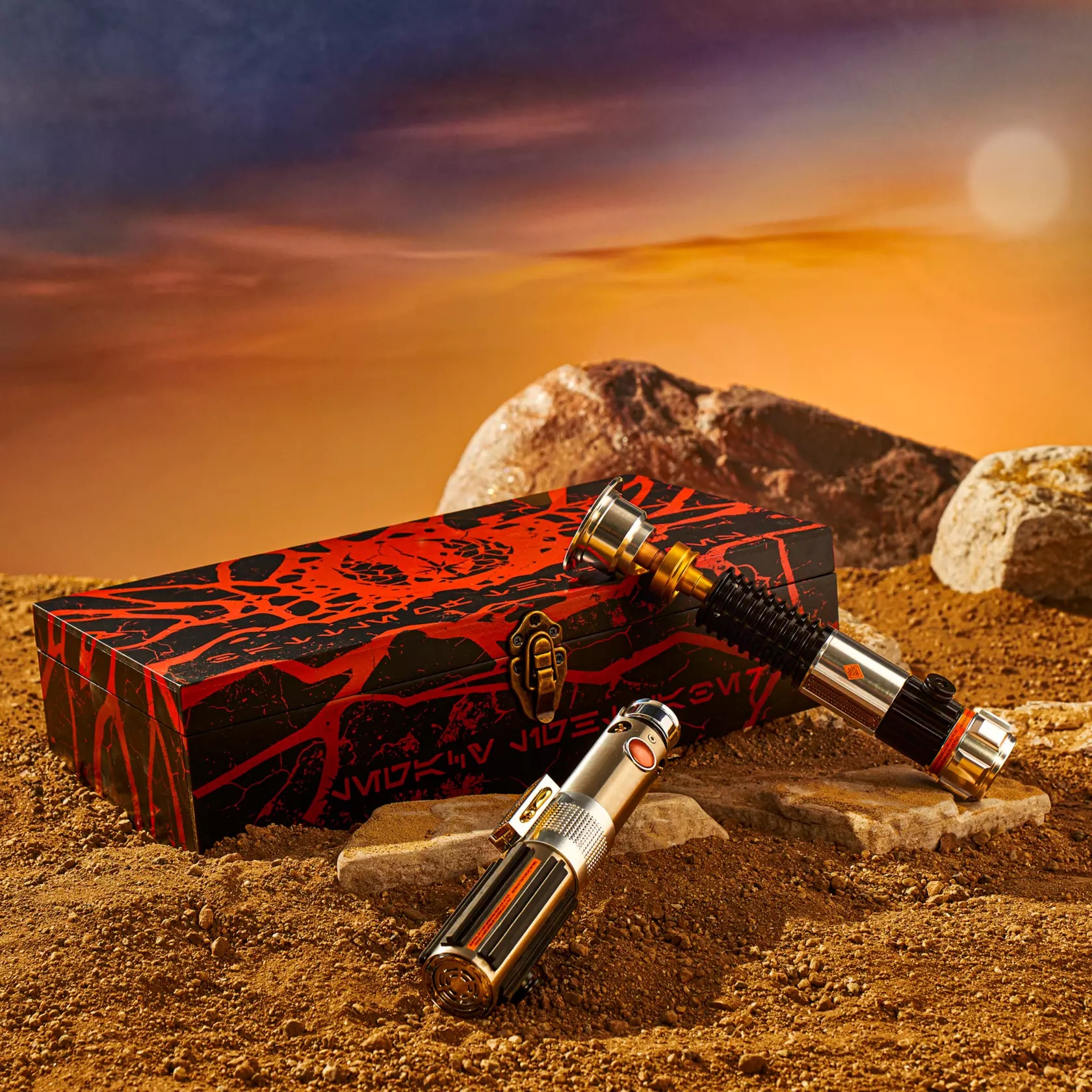 Disney+ subscribers can get a jump on their holiday shopping with exclusive early access to select merchandise on shopDisney, including this epic lightsaber set!

Inspired by the climactic duel in “Star Wars Episode III: Revenge of the Sith,” this limited edition set features the lightsaber hilts used by Obi-Wan Kenobi and Anakin Skywalker in a collectible case with a black-and-red design reminiscent of the molten fissures of Mustafar. This has an edition size of 5,000.

The lightsabers are held in the cushioned interior for safe keeping… well, safer than they were on Mustafar, anyway. The set comes with the case and both hilts but no blades are included. Blades are not sold separately on shopDisney but can be purchased in Star Wars: Galaxy’s Edge at Disneyland Disney’s Hollywood Studios.

They require 6 AAA batteries, included with the product, to produce special effects.

This product is only available to Disney+ subscribers through November 7.

This is just one of many items available with an early access window to Disney+ subscribers. According to Variety‘s Todd Spangler, today marks the launch of the program. Subscribers to the streaming service can visit shopDisney.com/DisneyPlusSpecialAccess and sign in using the email address linked to their Disney+ account to take advantage of the offer. Items inspired by “Black Panther,” “Doctor Strange in the Multiverse of Madness,” “The Mandalorian,” “Frozen,” and “Lightyear” are part of the initial round of offerings.

Spangler added that this is only the beginning of shopDisney becoming more fully integrated with Disney+. QR codes for featured products will begin appearing on the details page of certain movies and shows, while a “Shop” tab will appear for primary account holders. Disney+ President Alisa Bowen told Spangler, “special access to this curated collection of merchandise for the upcoming holiday season is the latest example of the many ways we experiment with how to improve the user experience on Disney+, which includes enhancing the benefits of being a subscriber. We’re excited to collaborate with shopDisney to explore how we can potentially better serve our audiences by expanding the ways they get to interact with the stories and characters they love on Disney+.”

This is also likely the first step towards instituting an Amazon Prime-style membership rewards program, which Disney has considered instituting in recent months, which would provide perks and exclusive deals for Disney+ subscribers. The move also comes just weeks ahead of the launch of an ad-supported Disney+ option for $7.99 per month, while the ad-free price jumps up to $10.99 per month.