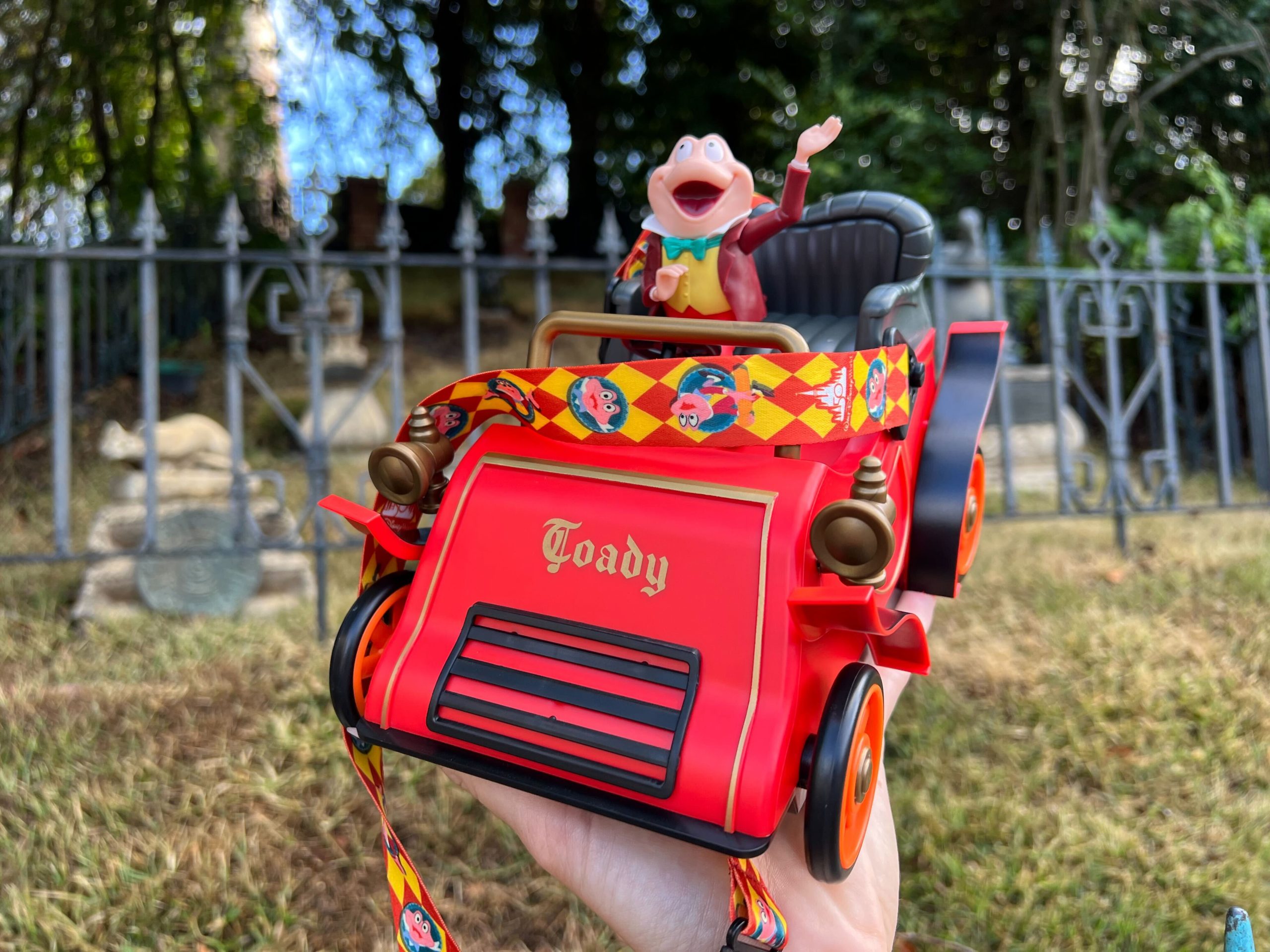 The Mr. Toad popcorn bucket is now available at Magic Kingdom. The bucket is being sold via mobile order and can be picked up from the window at Pete’s Silly Side Show.

It’s listed on the My Disney Experience app as “Magic Kingdom souvenir release.”

Signs guide guests to the pickup location and also offer a QR code to scan, which takes you to the mobile order page.

You can pick up the bucket both inside and outside.

Cast Members were ready with popcorn buckets lined up on tables to avoid another Figment bucket fiasco.

The bucket is part of the Walt Disney World 50th anniversary celebration in honor of Mr. Toad’s Wild Ride. The attraction was part of the opening day lineup on October 1, 1971. It closed to make way for The Many Adventures of Winnie the Pooh in September of 1998.

Banners and a ride vehicle can currently be seen in the Vault Collection shop in Marketplace Co-op at Disney Springs.

He looks to be enjoying his “wild ride.”

Mr. Toad was first featured in Disney’s “The Adventures of Ichabod and Mr. Toad,” which included “The Wind in the Willows.” The 1949 short film is based on the book of the same name by Kenneth Grahame, originally published in 1908.

Mr. Toad is afflicted by “motor mania” after seeing his first motor car. The ride had guests joining Mr. Toad on his wild ride from Toad Hall through London and eventually all the way to Hell (seriously).

The back opens up for access to the popcorn, which comes packaged separately in case you want to keep your bucket in pristine condition.

The removable strap is red and yellow diamond patterned with images of Mr. Toad and the Walt Disney World 50th anniversary logo.

The accompanying popcorn is slightly fruity and very sweet. There’s a dash of salt from the popcorn underneath.

It kind of tastes like they tried to make it like Fruity Pebbles. We recommend passing on the popcorn.

The Mr. Toad popcorn bucket will be available through November 4 while supplies last.

There’s also a limited-time Magic Shot through Disney PhotoPass for those who purchase the bucket. The Magic Shot puts you next to Mr. Toad as he careens through the streets. The PhotoPass photographer also adds a sign to “nowhere inn particular.”

For more tributes to Mr. Toad’s Wild Ride, the Friar’s Nook offers a Mr. Toad Brat Burger, The Wild Ride slushy, and the Devil’s Chocolate Mousse Cake. The Mr. Toad Dome Cake is also available again, this time at Big Top Snacks, to celebrate the release of the bucket.

Mr. Toad’s Wild Ride is still operating at Disneyland. You can see photos and watch our POV ride video here.