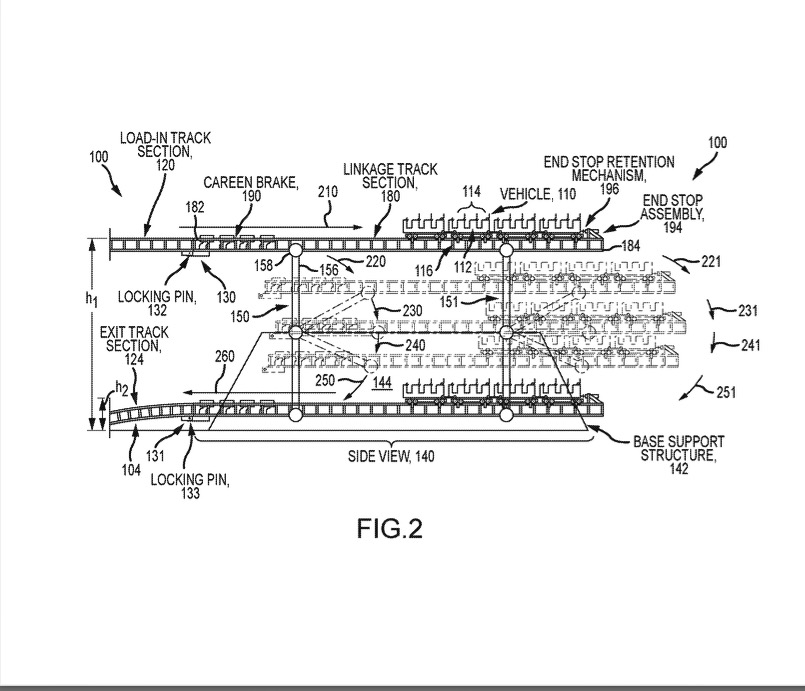 Every year, Disney Enterprises files patents for a wide variety of inventions – some of which become reality. Recently, a patent, which Disney submitted on May 17, 2021, was published. This patent is for a new park ride system entitled “PARK RIDE WITH DROP SWING PROPULSION.”

This patent states this is a “park ride for use in theme parks. amusement parks. and other settings.” It goes on to say that the new ride includes a track defining a ride path for a passenger vehicle(s). What makes this unique is this new system includes a ride with a “drop swing propulsion system that is adapted to drop a section of the track upon which the passenger vehicle is supported from a first elevation to a second elevation that is lower than the first elevation.

“The dropping motion involves swinging the track with a linkage assembly, which with other components of
the system may form a four-bar linkage, so as to impart a propelling force on the vehicle to move it along an exit track section provided at the second lower elevation.”

So, what Disney is proposing here is taking one or multiple-ride vehicles and dropping them from one height and swinging or propelling that vehicle along on a lower elevation.

As we can see in Figures 2 and 3, the ride vehicles at the top of the track are in the process of dropping from the higher elevation to the lower elevation.

In Figure 4, we see the ride vehicle on the lower track and moving forward. The track towards the front of this illustration curves slightly suggesting a turn upon the exit.

Figure 5 just shows a variation on the new track system, but this time it is with an individual vehicle instead of a number of cars attached together.

Disney states that this new park ride design is “particularly well suited for use in roller coasters, water rides, and the like in which vehicles are configured to ride or roll, at least a portion of the time, upon a track.”

Disney believes that guests visiting a theme park are looking for “new and surprising ride experiences,” and most guests know what to expect when they get on most attractions, such as a roller coaster.

They go on to say that existing theme park rides are based on “very old ride designs and configurations.” Although there have been recent updates such as including thematic elements (scenery, audio, and visual effects), none of those things affect the physical ride experience.

With this new patent, Disney is looking to “modify the physical sensation” that guests experience and to “change how a vehicle travels along the ride path.”

This new system is designed to drop a track section with a ride vehicle(s) anywhere from 5 to 20 feet or more change in elevation. Additionally, in some drop sections, the passenger vehicle(s) could travel in a “second direction opposite from the first direction.” Think Expedition Everest, but more advanced.

To be clear, this isn’t something confirmed for any upcoming attraction at a Disney Park, just a patent filed. In the past, a Disney spokesperson has said that although Disney files many patents, many of them never make it off the drawing board. Well, this is one we sure hope does and becomes reality in the near future.

Is this some type of ride system you’d like to see in a future attraction? Let us know in the comment below.

Check out some other recent patents Disney has filed: