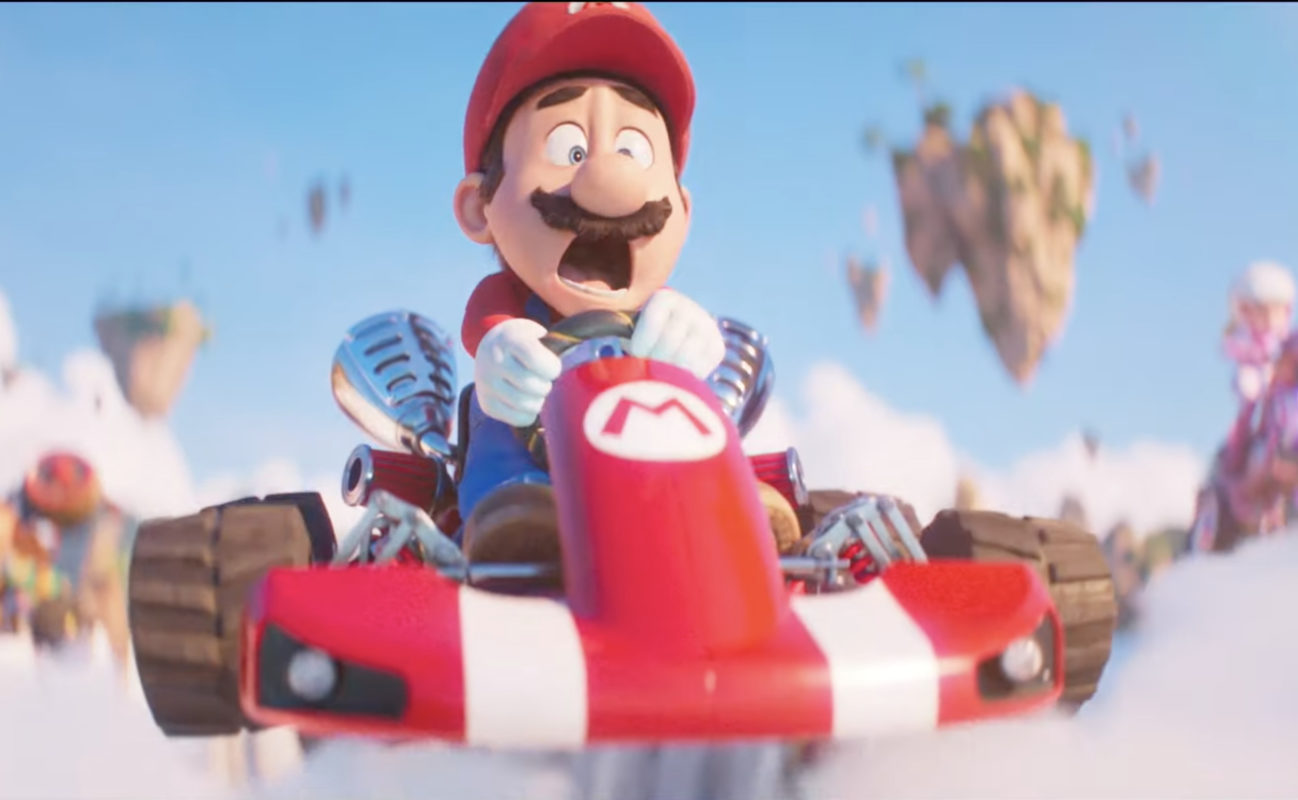 The trailer is at first underscored by a haunting piano version of the original Super Mario Bros theme as Mario walks out from shadow into a jungle arena where he’s challenged by Donkey Kong. Floating ? Blocks abound. He says “Let’s-a go!” as the action kicks off… and he’s defeated easily. Princess Peach and Toad watch in horror as Cranky Kong remains nonchalant.

Luigi is then brought to Bowser, as bats fly above Koopa Troopas and Goombas from the games. Bowser interrogates Luigi, claiming he’s about to rule the world, and Mario is standing in his way. Peach then prepares for battle in her castle, with the iconic Super Mario 64 stained glass window in the background of her throne room. We then see her in her Mario Kart tracksuit walking out with Toad.

The trailer then cuts to a platform scene quite like one would play in the games. Power-ups like Tanooki Mario and Fire Flowers flash across the screen as well as a swarm of Yoshis and various environs from the games. There’s even a brief hint at a Mario Kart scene on Rainbow Road!

The film is directed by Aaron Horvath and Michael Jelenic (collaborators on “Teen Titans Go!”) from a screenplay by Matthew Fogel (“Minions: The Rise of Gru”), the film stars Chris Pratt as Mario, Anya Taylor-Joy as Princess Peach, Charlie Day as Luigi, Jack Black as Bowser, Keegan-Michael Key as Toad, Seth Rogen as Donkey Kong, Fred Armisen as Cranky Kong, Kevin Michael Richardson as Kamek and Sebastian Maniscalco as Spike.

You can watch the first trailer here on Universal Parks News Today.

“The Super Mario Bros. Movie” releases April 10 in the United States. For more of the mustachioed plumber, you can check out our latest construction update from Super Nintendo World at Universal Studios Hollywood and check out our full guide to the already complete land in Japan! Are you excited to see Mario and pals back on the big screen? Let us know in the comments below!